No this isn’t social commentary.  It’s a play on the title of an earlier post:

2 years ago, Liz bought me a reel mower, partly to satisfy my curiosity, partly for humor as she never expected me to stick with it.  But I quickly discovered the virtues of the reel system, only falling back on the gas machine for jobs that needed more power.  The reel mower was a basic model, having deviated little from the original schematics of those 1950s icons.

But it had started giving me some problems.  The cutting bar wasn’t thick enough, which caused it to expand and contract with temperature fluctuations.  I had to pack a screwdriver whenever I went out to mow, as it invariably needed adjusting first.  I also found the steel to be too soft, as the cutting bar had flexed unevenly, leading to a slight warp that gradually worsened to the point where fine tuning could no longer compensate.  I had sharpened it a few times with lapping compound, but it really just needed to be reground.  I also hated the wheels.  They were plastic and didn’t have much in the way of traction.  Hitting thick patches tended to just jam the thing up and slide if forced.  In short, I had worn it out, and it really wasn’t suited for the task I was asking of it anyway.

As an early Father’s Day present, Liz got me this number.  I had been eyeing this particular model, but being the miser that I am I never bought it.  So Liz solved that problem for me. 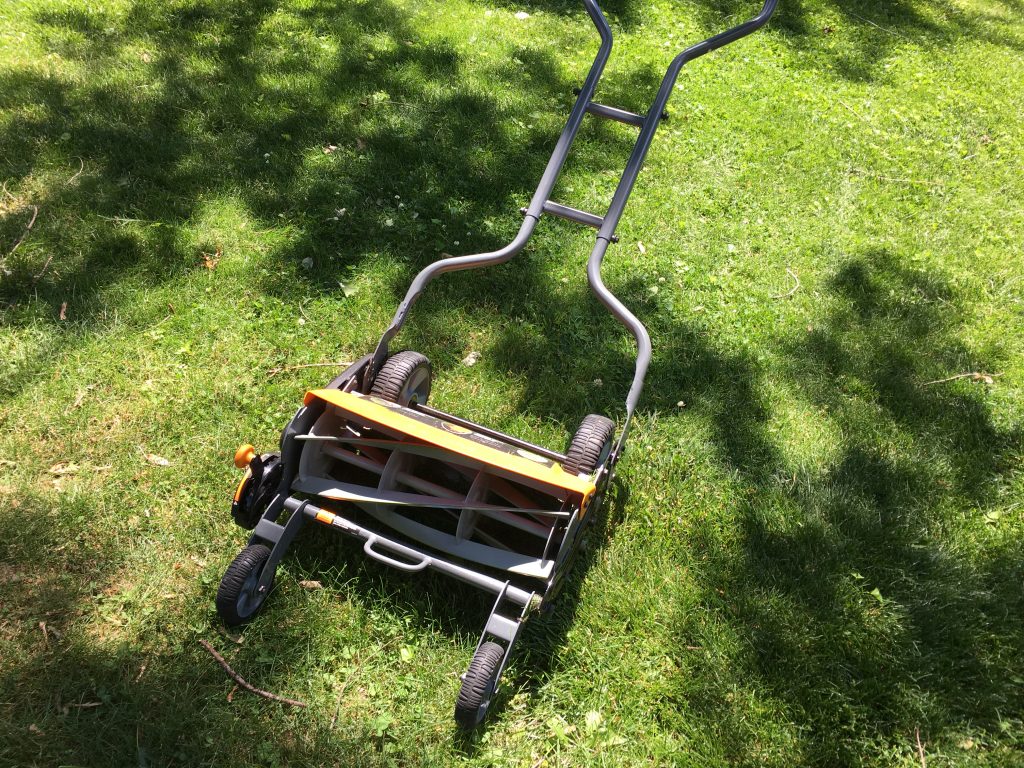 This bad boy is chain driven, has a wider track, rubber wheels, thick anodized blades, and a redesigned cutting bar shape that I notice tends to push sticks down and out of the way rather than into the blades to jam.  The chain system really gets the blades moving too, making for less missed grass while also letting the user really put some power into it for those difficult patches.  The old mower couldn’t get through grass stalks–those thick round stalks that pop up when the grass tries to seed–but that’s no problem with this guy.  No more multiple passes needed!

My only gripe is the blade distance was set ultra-conservatively out of the factory.  I had to narrow the gap so it would effectively cut, and that process required me to loosen 4 bolts that the manual told me were “…tight from the assembly process to prevent any movement in shipping, and may require some extra leverage.”  No kidding.  We’re talking like curb-stomped lugnuts here (for those of you who’ve actually changed a tire before).  This process took way too long to figure out, and the manual itself I had to find online.  But hopefully I won’t have to do it again for a while and at least now I know how.

Post-adjustment, it works perfect and is near silent.

Now I really can’t think of any excuse to not ditch the gas machines for everyday mowing.  And while this is much easier to use that the last reel mower, I still say it warrants manliness points for being fully manual.  So I’ll reiterate: Man up–get a reel mower!