When we bought this house, I installed ethernet.

Then I began working at home, and discussed my basement setup.

Then I upgraded my basement setup.

Then I installed a patch panel.

Then I upgraded my basement setup again.

But still–something nagged at me.  My Linux machine demanded more respect.  It was connected to the intranet via a crimped CAT6, but that connection was merely a hack.  The wire was solid core, and not intended to be crimped to an RJ-45.  It needed improvement, and that improvement would ordinarily be very low-priority, were it not February.  But then Liz took the kid out shopping for summer clothes, and I found myself suddenly free of time.  I decided it was as good an excuse as any.

I concluded that I would wire the desk itself and install two CAT6 jacks into the middle of the second section, next to the Linux machine, and attach the cables to the underside via a cable organizer.  The desk, being of IKEA construction, was a laminated particle board and surprisingly tough.  I considered the daunting task of drilling out a rectangle for a low-voltage box, but that hardly seemed necessary.  There wouldn’t be any need to shield the wires since they wouldn’t be exposed in dead space, and if I drilled the plate down directly into the wood, there wouldn’t be any advantage to the box’s drywall tension wings.  Plus, selective drilling would minimize undermining the desk’s structural integrity.  I would just need two holes, just large enough to accommodate CAT6 keystone jacks, which I would then push up through the desk, snap into the plate, then mount the plate.  I had a plan–it was off to the hardware store (Home Depot)! 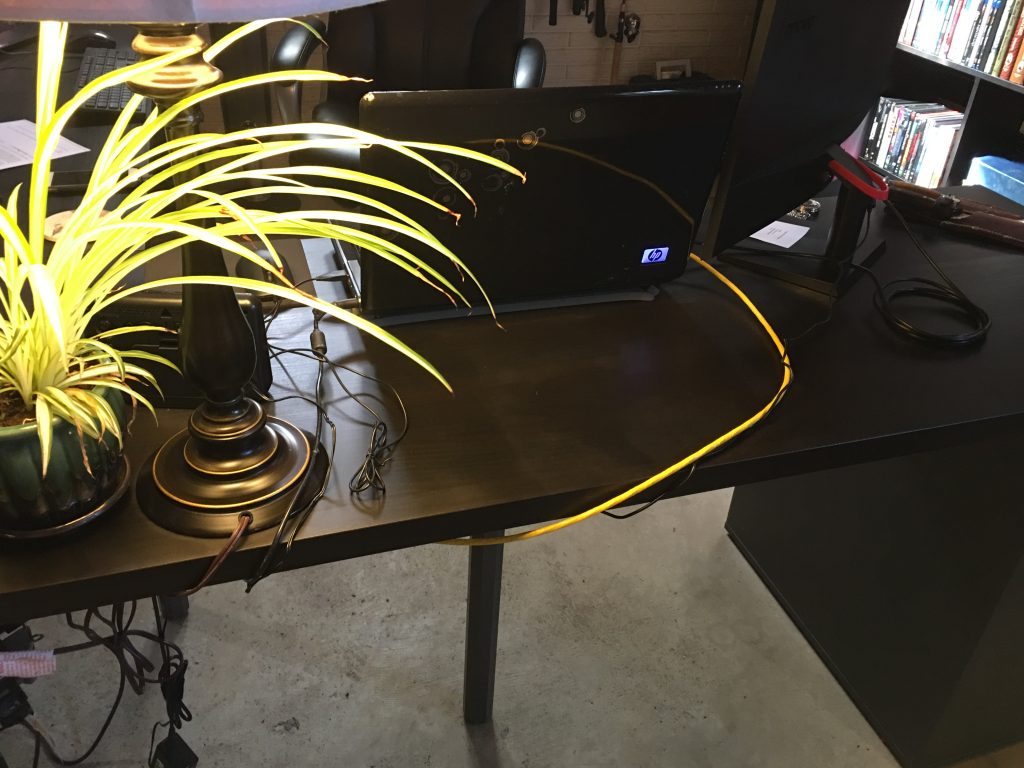 Initially, I planned to wire both desks, so I purchased 2 2x white keystone plates, 4 white CAT6 keystone punchdown jacks, 2 5ft cable organizers plus elbow, and a small bag of wood screws.  Side note: keystone jacks and cable organizers are kind of expensive.  The total price came to about $60.

Back home, I measured and placed the plate to my liking, then traced its shape. 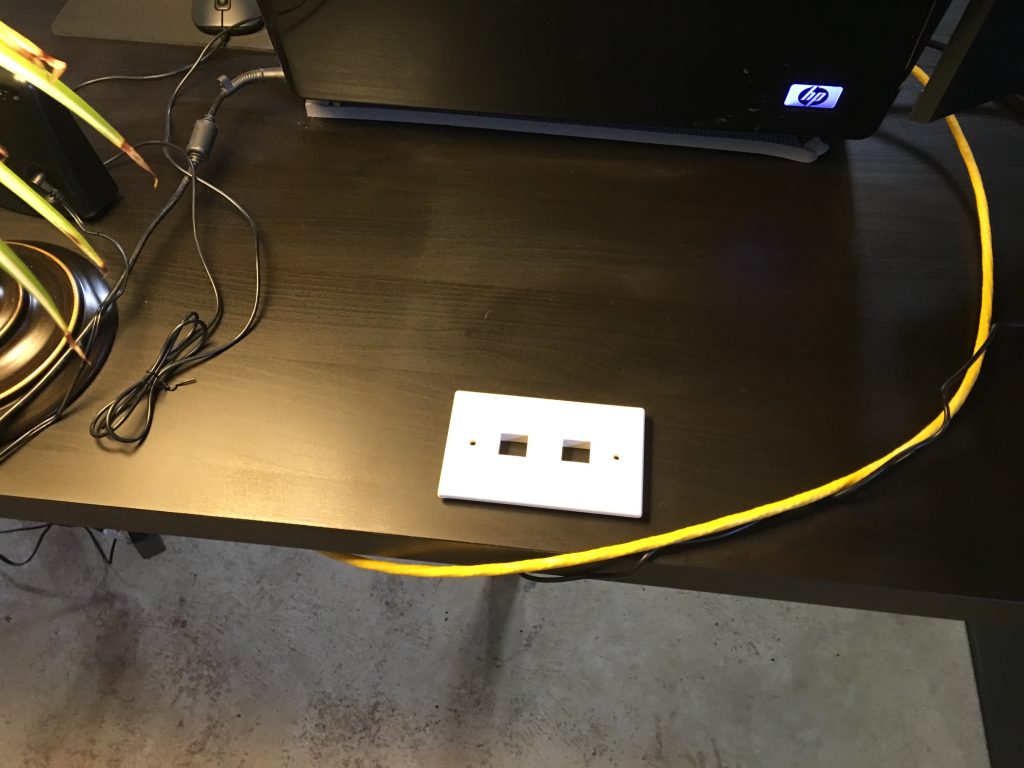 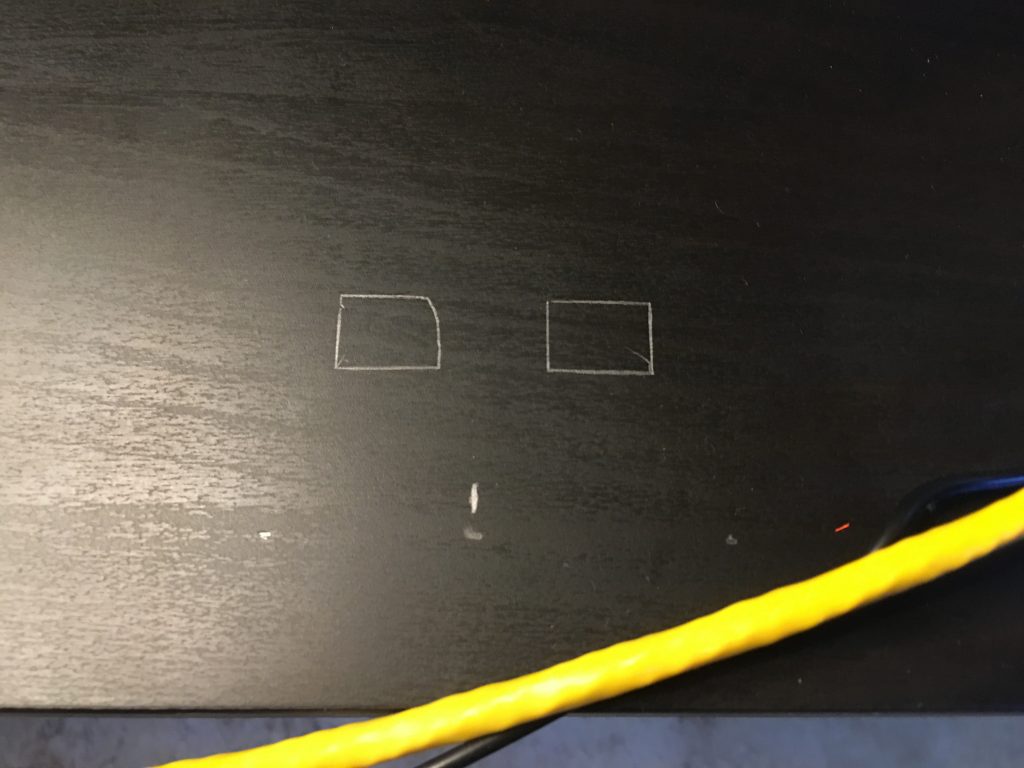 Then I started drilling.  In hindsight, I should have started with a 1/2″ bit and made the initial holes just deep enough for the jacks, then finished the cable drops with a 3/8″,  but at the time I just continually widened the holes with the 3/8″–a minor end result, but using the 1/2″ would have looked cleaner. 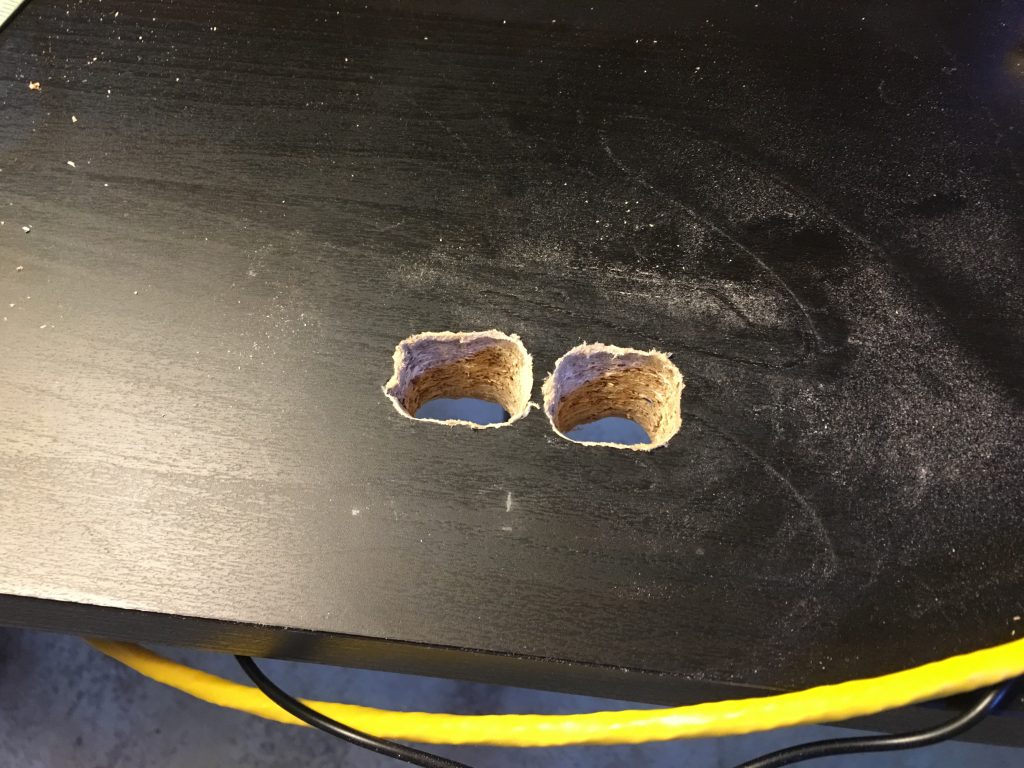 Then I measured off some bulk CAT6, punched the two into the patch panel, then fed the cables up through the two drops, punched those ends down into the jacks, connected the new patch panel drops to the switch via CAT6 patch cables, then tested the new connections by plugging in the laptop.  And everything worked perfect and life was grand. 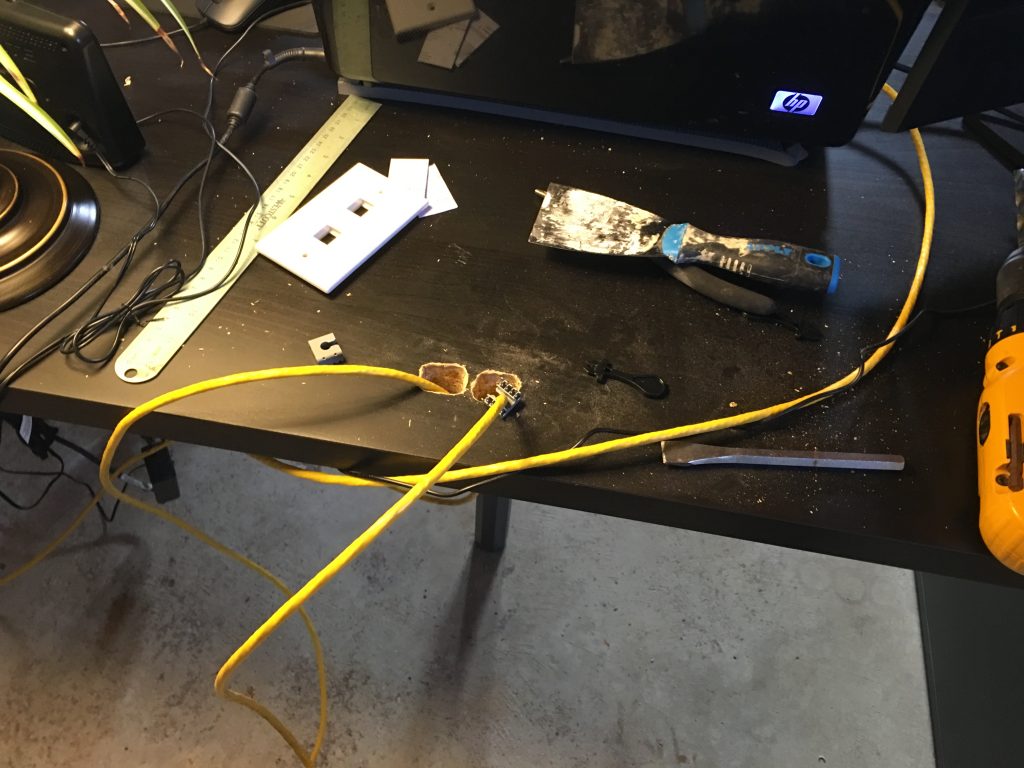 Kidding.  Neither line registered any signal.

To be clear, I’m no rookie at this.  I stared, confused, at my failed handiwork, and let the universe know my displeasure with a manly battle shout of despair towards the heavens.  Then I contemplated the sources of failure.

The cable itself should be good, as I had already used 500ft of it.  The patch cables so far hadn’t been a problem, but I tried swapping them out anyway to no avail.  The patch panel should be okay, as the first 5 lines punched down just fine.  I then tried a different computer, but still no connection.

My theory, then, was the most untested variable: the keystone jacks.  So I ripped them off and tried a new one.  Same problem.  It was irritating, seeing as they cost $5 each.  So I repackaged them and headed back to the store.

At the return desk, I mentioned that they might have a bad batch of these.  The lady didn’t acknowledge me, and simply refunded my purchase.  I have no doubt that those same jacks ended up right back on the wall, and some other home renovator would soon also be wasting 2 hours trying to figure out a bad ethernet drop.  Sigh.

For the record, they were this brand (Commercial Electric): 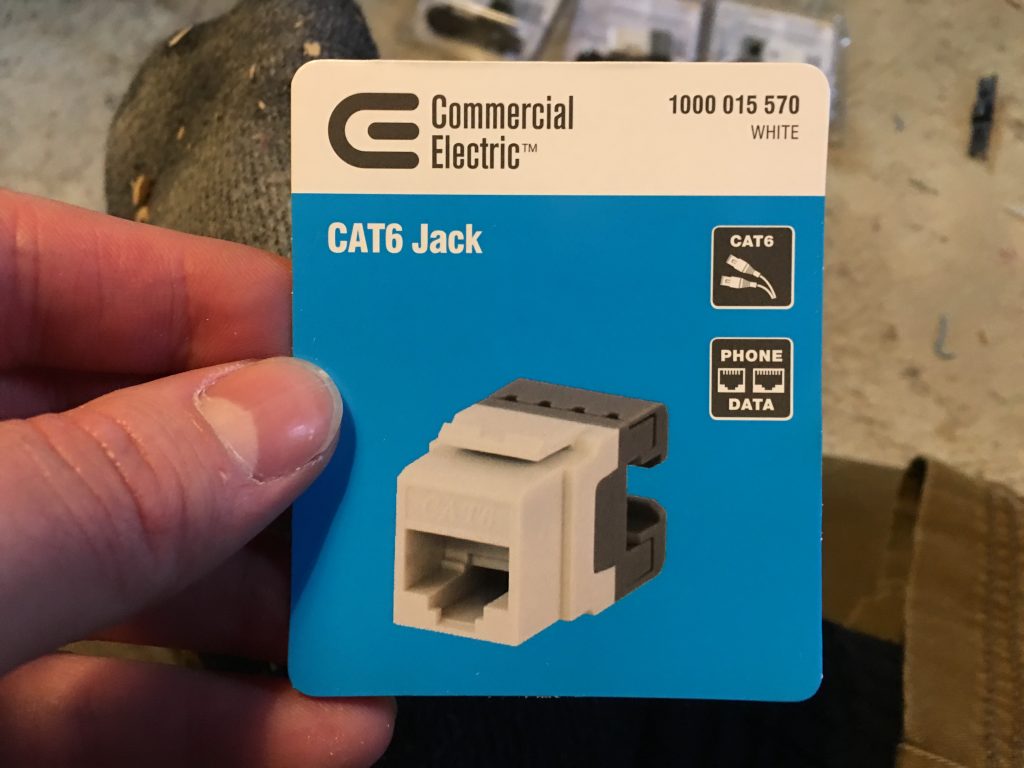 I’ve bought this kind before, so I dunno why I got so many that were bad this time around.

I initially had gone to Home Depot because they cater a little more to home repair, rather than improvement, and as such they carry more contractor-grade inventory.  When I was forced to try Lowe’s, I only found bags of jacks, and since I didn’t need a whole bag, I had to pay for more than I wanted–$10 more in fact.  The bill was up to $70 now.

This was especially irritating since I only chose the color white to better match the minimalist theme of the basement setup, but everyplace else in the house used almond.  Maybe I would install a proper jack in the garage ceiling next (it currently has an RJ-45 crimped on the end, feeding the hotspot.  That would be another place to use white.

But anyway, I was antsy to get this project done, so I simply grumbled at the price, took them home, attached one, and it worked instantly.  Same deal with the second.  So I guess no more Commercial Electric for me.

After that, it was a simple matter of snapping in the jacks, bolting down the plate, sticking up the cable organizers and popping in the cable.  Here’s some photos of the final result: 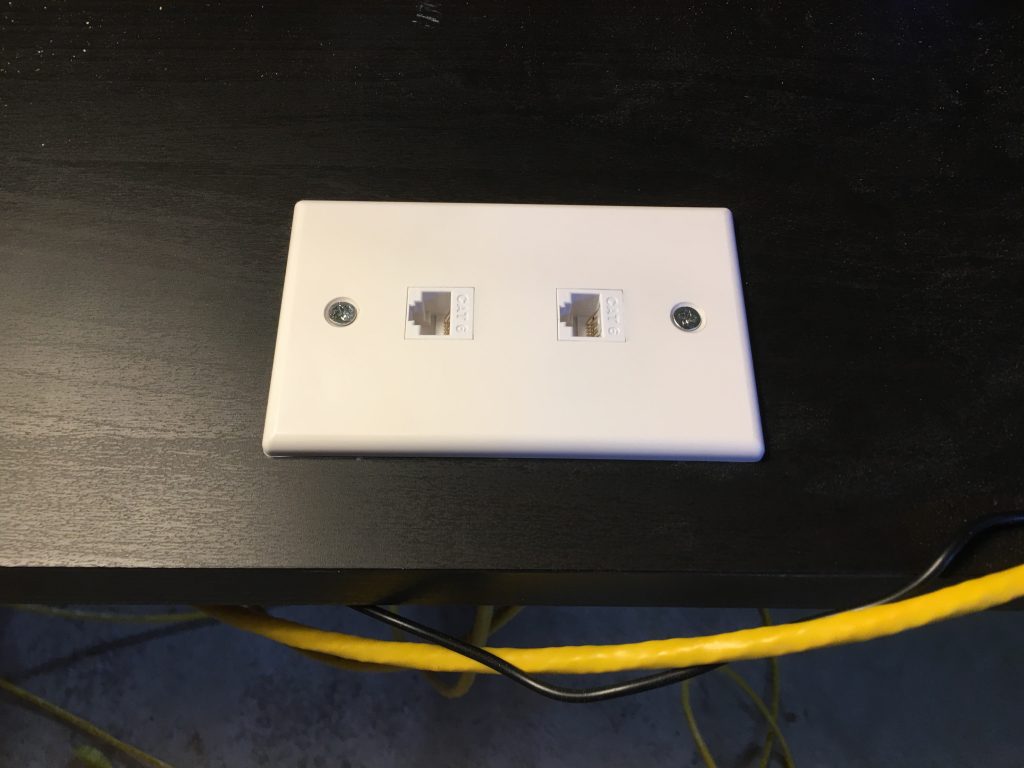 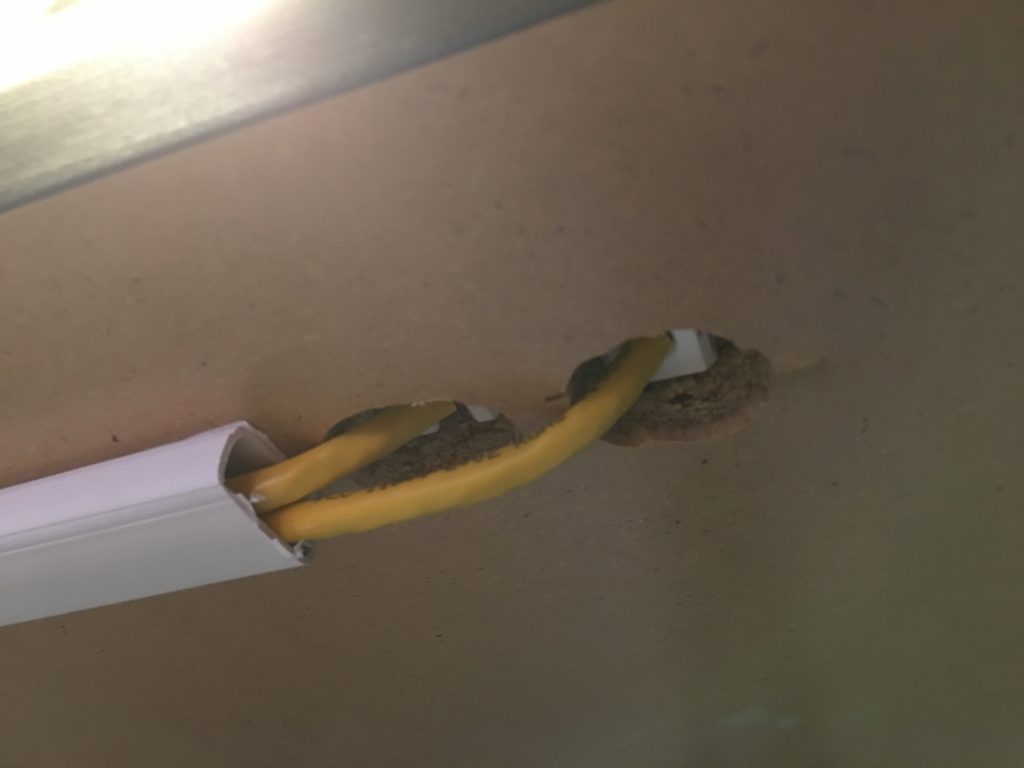 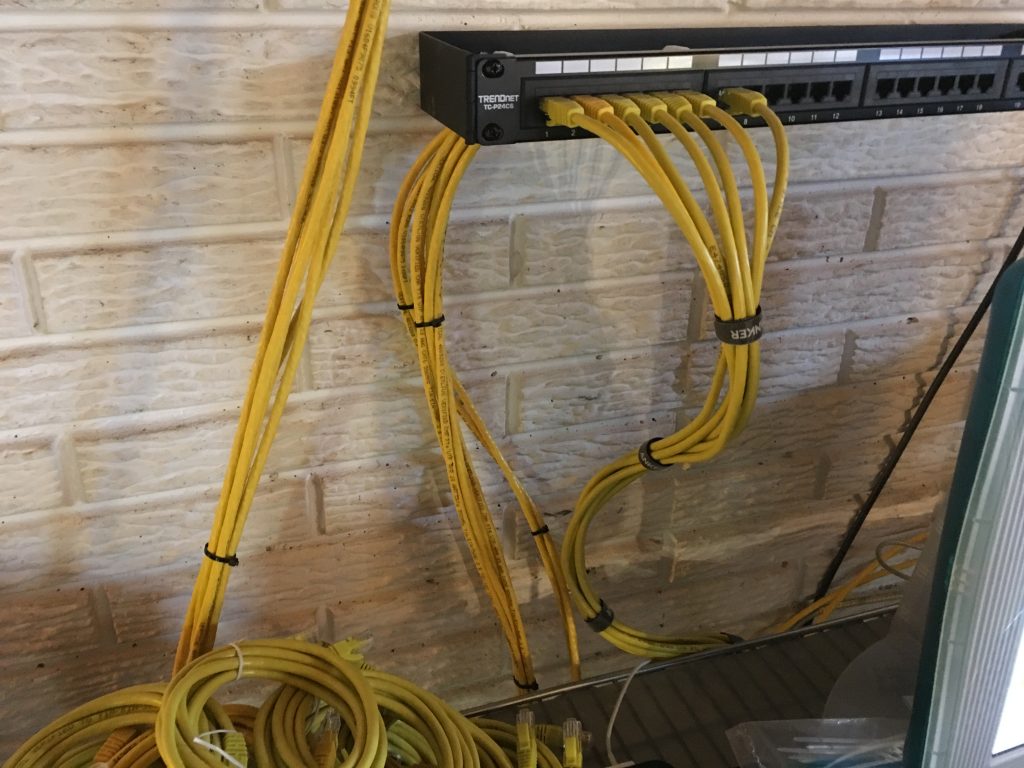 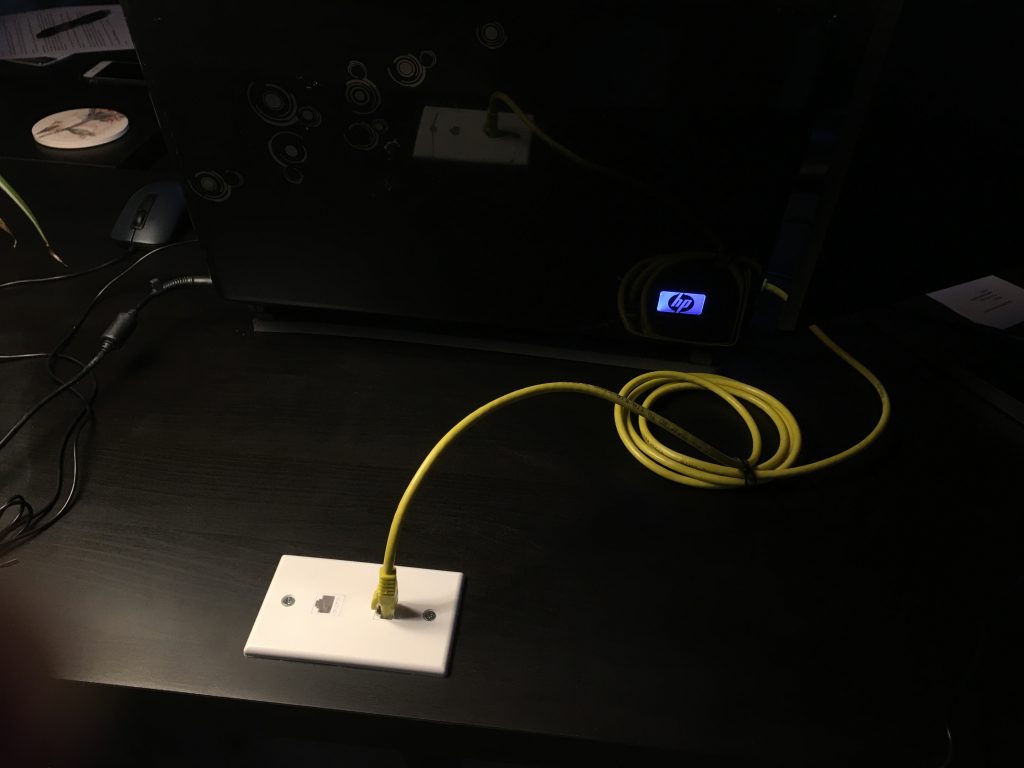 Few things are more satisfying than a bundle of well-organized highspeed data cables.

As a Man of the Wastes, I seek a certain refinement to daily routine.  I desire the comforts of old–music, culture, and a place to sleep without giant mutated ticks.  I have my basic needs fulfilled, so naturally I turn to the aesthetic and artistic.  I want to live, not just avoid death.  So let those young bucks suit up in power armor and run foolhardily into the irradiated desolation.  It may be they who eradicate the violent abominations of the land’s fringes, but it shall be I who will restore the quality of life.

My earlier hours in Fallout 76 left me somewhat unimpressed with the world I was given, plus a certain lack of urgency.  If everyone who lived here before the vault was opened are dead, exactly who am I saving?  The premise now is not to be a hero, because there’s no one to laud my accomplishments.  So instead, I will collect salvage and build an abode.

Then it occurred to me: I’m alone, and I built what is essentially a studio apartment bachelor pad.  What good is that if I can’t entertain?  It was time to make a friend!

The trouble with an isolated cabin in the woods is it’s rather…isolated.  There weren’t exactly a steady supply of weary travelers with which to exchange booze and stories.  On occasion, one would pass nearby and I would invite them over.  The individual would typically peruse my layout, give an approving thumbs up, use my workstation equipment, dump their junk off in the stash, and run off (never bothering to close the door on their way out, I might add).  Fine, I would instead stalk random people and force good will upon them.

And so, armed with purified water and stimpacks, I set off.  An unexpected benefactor of medical supplies I would be.

My first victim was busy scrapping items at the beginning camp.  I initiated trade, he accepted, and I offered free water.  He readily grabbed the freebie, and then I ran off before he could respond with any form of emote.  Ha!  Goodwill ninja!

I realized then that the problem with trading was that it required mutual consent.  I decided to change plans.  I would drop bags of goodies at peoples’ feet!  Take that!

I initiated this bold plan upon another newbie coming down the main road leading to the vault.  I ran up to her and waved!  She shot me.  Jumpy–that one.  No matter, I ignored the slight and dropped a stimpack and bottle of water.  She stared, quizzically, so I encouraged her with a thumbs up, stepped back, and fired a harmless round at the bag, then ran around it, then backed off.  She approached, inspected the bag, took the goodies, gave me a heart sign, and…I ran off!  Huzzah!  Goodwill ninja strikes again!

I considered, goodwill ninjaing is fun and all, but it’s not a very good way to meet ladies if I run away immediately.  Next time would be different.  I would give the wasteland equivalent of my phone number–a creepy beckon to follow me all the way back to my cabin.

The next fellow I encountered was locked in combat and seemed to be struggling.  I lent a hand, and he thanked me by repeatedly punching me.  I guess that’s how people say hello in these parts.  I gestured my peaceful thumbs up, and he responded with more punching.  I guess he didn’t want company.  I left without offering anything.  Coldshoulder ninja!

Consulting my map for more prey, I noticed a conglomeration in the area where I used to have my cabin–before the game rudely supplanted it for the umpteenth time and I decided to move.  It was a nice spot, so it wouldn’t surprise me if someone else had moved in.  I set off in the general direction, still loaded down with water and medicine.  Water that would go in someone’s gullet before I was through, mua ha ha ha!

I climbed the rocky crags until at last, I reached the exact spot upon which my own cabin used to reside.  And there, in its place, sat another cabin–properly furnished (though not as well as mine), with a campfire surrounded by instruments.  Naturally, I sat down to play, and in short order, and as the universal cultural constant dictates, other joined.

One, two, three women!  I had found ladies at last!  And we had formed an impromptu quartet!

Sadly, the game mechanics randomize the servers, so I don’t have any way of guaranteeing a second house-call.  But if I ever find myself in their neck of the irradiated wastes again, I’ll be sure to bring something stronger than water.

Two years ago I worked under these appalling conditions.

Then, a year ago, I upgraded to these conditions.

But I wanted more.  I wanted…shelving.  For how else am I to present a pompous variety of books in my background while engaging in video conference calls?

Some might argue against IKEA, calling it cheap and juvenile.  But I say, in the appropriate conditions (such as an unfinished basement), it’s modularity and simplicity makes for an endless assortment of configurations, demonstrating that function alone can be an aesthetic. 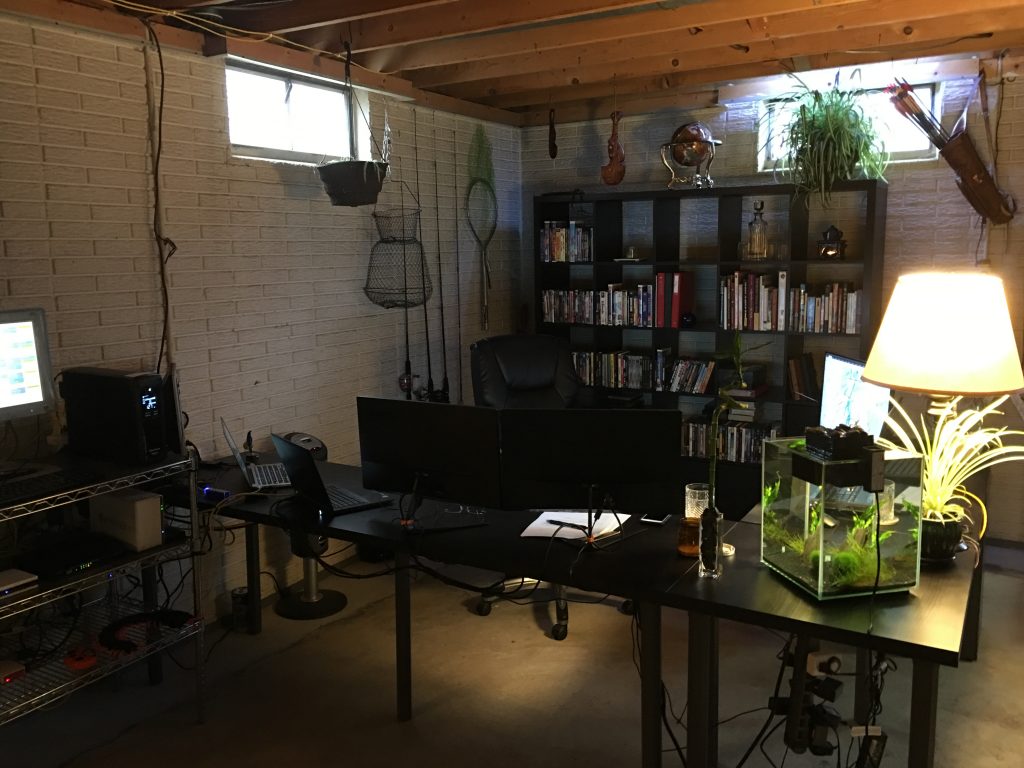 Plus, my physical movies and second priority books are actually organized now.  Never know when I might need that 1990s aquarium-keeping guidebook.

In my opinion, once the holidays are over, it should warm up instantly.  In reality, however, it never snows and gets truly cold here until the end of January–the point at which everyone’s tired of the cold and wants to go outside again. 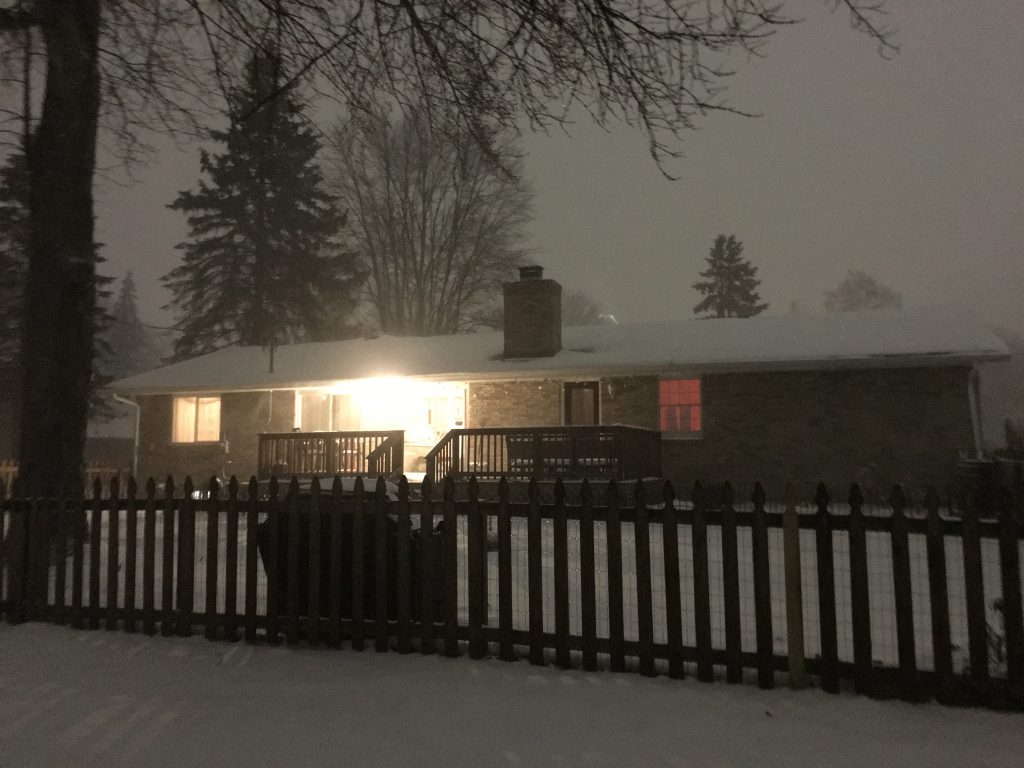 So with no outdoor projects immediately available to me, here’s a list of what I did last January:

Yep–that seems like an appropriate list for January.  Tune in May.  I should have something interesting to write about then.