It’s more or less what I’ve learned from any Greek story: nature will kill you given the smallest chance.  And it’s not an entirely overdramatic conclusion really.  We only recreate outdoors now voluntarily, and only because we’re rarely in any serious danger from doing so (except that of our own making), and that’s because we’ve driven to near-extinction any competing apex predator.

But still, nature will kill you.

But nature kills everything.  And in few ways do I find this more apparent than the existence of the carnivorous plant.  A generally immobile life form, seeking its energy from photosynthesis, it hungers for something more.  It hungers for blood.  It requires nutrition!

I think everyone’s had a Venus flytrap at some point.  And everyone’s had one die.  Like goldfish, we all dabble in the hobby, then give up instantly upon failure.

But age has granted me a longer attention span, and greater resources.  So when my mother gifted unto me a couple such carnivorous plants, I decided to make a certain effort and keep them alive.

Following my sister’s advice, I planted them in a mix of sand and peat moss.  But with nowhere to put them (houseplants don’t do well in our house as it has no south-facing window), I left them under the grow lights.

So far they’ve been doing well, and have slowly produced more deathtraps.  A number of fruit flies have fallen victim. 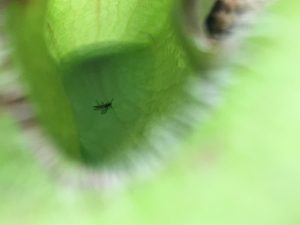 I must be doing something right, because they’re still growing and making more traps.  Maybe they’ll have a slight impact on the number of unwelcome flying houseguests.  Regardless, they do look cool.

I went through a phase in my youth where I was obsessed with clocks.  Something about the sophistication of mechanical engineering to such an exactness so as to measure time accurately was just fascinating.  Beauty can indeed be defined through such means, like the way I appreciate a fine knife for its design and metallurgy long after it’s been scratched and resharpened into what so many others view as a simple chuck of cutting steel.  It’s why I went through a lockpicking phase–timeless engineering that has only been marginally improved upon.  Analog perfection.

I never quite grew out of that phase.

In the Lubbock years, one of dad’s colleagues had a grandfather clock.  It was bizarredly contrasted to the lime-green shag carpeting which traversed the entire house, but even that could be overlooked when in the presence of such a masterpiece.  It was a dark reddish wood, perhaps mahogany, with the typical polished bronze components.  Its quarter-hour chimes punctuated the evenings with delicate reminders of time’s passage without being jarring.  The chimes, I would only recently discover, were the Westminster quarters.

Since then, I had always been on the lookout for such a clock to call my own, but transient residences and limited finances prohibited such an investment.  Finances still do, as a true grandfather clock today runs well into the thousands.  But on occasion, I would see them in antique stores and would be reminded of the fantasy.  The ones in these stores were markedly smaller and cheaper than what I remembered too, and labeled with dubious claims like “It still works”, despite not actually having been wound recently, and “As-is, no returns”.  Conditions such as these are why my next car will not be pre-owned.

Then a neighbor had an estate sale.  Liz snapped a photo of such a clock and asked if I wanted it–for a modest $75.  Turns out it was a grandmother clock–a smaller variant, and term with which I was unfamiliar.  But, it had been maintained by The Village Elder, so its mechanics were guaranteed from a reliable source.  I confirmed the purchase, and with the help of The Village Elder, it was waiting for me in the dining room when I got home.  Whatever it’s called officially, it’s still a satisfying 6 feet, and while being of a laminated wood, looks as nice as any well-made laminated furniture.  And the price couldn’t be beat. 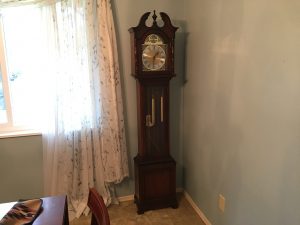 But of course I couldn’t let it go as a simple aesthetic accent for the room.  I needed to know its origin.

So I opened the clock and looked for identifying marks.  I found 2: 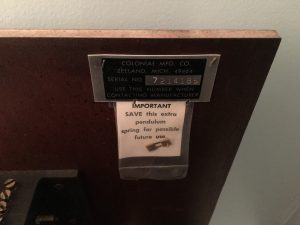 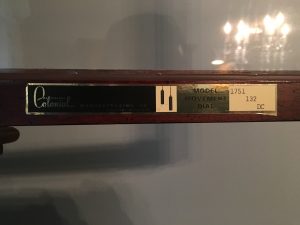 And so the internet search began!

The metal plate revealed that the clock had been made by Colonial Manufacturing–a company based in Zeeland, MI; and a company that had apparently gone out of business in 19831.

Further digging led me to a clock specialists’ forum, which claimed that the catalogs didn’t exist in any readily-available digital form, but the metal stamps weren’t introduced until the 1970s2.  This backed the claim of clocks I had seen previously in the antique stores, which were labeled as from the 70s.  Also, the veneer is thick, and modern stranded board is from the early 1980s, so while not definitive, it would appear logical to conclude the type of veneer to be a direct predecessor, so again–1970s.

Is a far cry from the ominous chronographic sentinel of my memories, but it’s a very lovely timepiece nonetheless.  And its chimes are the same.  Liz too has distinct memories of that sound.  Perhaps it will be good for the kid–to give her a sense of how fleeting time really is.  Eternal time, measured in quarter hours.  Tempus Fugit indeed.

This year’s squirrel hunting wasn’t so successful, so I have no epic tales of glorious battle to recount.

But we did spot an epic mushroom.  And I just so happened to remember seeing one of these before on a hunting trip.

That was 6 years ago.  Apparently it made an impression on me.  Mushrooms are cool.  and creepy.

When I look back on my early education years, I reflect on certain words and phrases.  These combinations have entered public lexicon, and no one seems to question them later.  “Whole Language” was one of them.  Apparently I learned to write during this trend, and was taught how to represent concepts rather than accurate spelling and syntax.  Spelling developed later through simple writing practice, though in the days preceding spellcheck, I didn’t get the immediate feedback, so I was slow to adapt.

But the big one to me, being the historian, is the term “Social Studies”.  Taken at face value without the personal experiences within the American educational system, the term sounds like preparatory education for public sector work.  But what is it really?

The wording of that statement seems almost presumptuous, but I didn’t feel like reading the 63-page government document that outlined the program, so I’ll take the summary at face value.  Assuming it’s accurate, 19th-century education apparently didn’t incorporate the broad spectrum of social studies: history, geography, and political science.  And rather than cover each discipline, they were all thrown into a big pot and given a common name.

The problem, in my opinion, was that as schools organized subjects based on time blocks, all of these disciplines were allotted only a shared time–50 minutes, in my own experience.  So for 50 minutes a day, I was expected to learn humanities and social sciences.

And this is where I’ll note that physical education was a double-blocked class.

And physical education is a misnomer–the class was football education.  So for 2 hours a day in my youth I learned how to play football, and was given half the time to study all of the humanities and social sciences.

And social studies is also a misnomer, because the curriculum of this class was entirely comprised of Texas history.  So for the majority of my adolescence, I learned football and Texas history.

I don’t suppose that my Texan upbringing was a common experience outside of that educational system, but why do we continue to group things like this?  Is there some reason the various social sciences can’t be addressed individually?  Then again, science classes were all grouped together too.  I guess when we’re young, we’re just thrown information in the hopes that it will build foundations as prerequisites for more delineated disciplines later?

Just one of many questions I posit for my successors.