Well, maybe not doom, but the usual mix of anger and irritation.

Liz wanted a storm door on the front, as she had long complained about the lack of airflow north to south through the house, which is mostly because there’s no south-facing window (aside from the bedrooms).  So, in theory, the front door could be left open to aid this pneumatic conundrum were a screen to be installed there.

I liked the look of our front door, as it sported a rather medieval type of aged bronze handle upon dark maroon paint, so I was reluctant to hide that behind my outdated vision of a screen door: the Lubbock house’s back door–an exposed aluminum frame with a screen that was always torn and popping out.

But there have been some design updates in the last 20 years, and the modern iterations are coated aluminum with hybrid glass/screens.  They also mount into frames with enough clearance so as to avoid doorknob complications, and they can accommodate the ever so important seasonal wreath which hangs from the main door.

Nevertheless, it wasn’t as straightforward as IKEA furniture.  In fact, depending on its desired orientation, the screw holes had to be manually drilled out first.  This process required some spacial orientation, and therefore concentration, to do correctly.  But at this critical moment, Poppy attacked the mailman, and after I corralled the whippet any such concentration was shot, and of course I drilled out the wrong side.  Sigh.  At least the holes are small.

I also had to drill out rather large holes to attach the doorknob and deadbolt, during which the battery in my drill went dead, so the project experienced a rather unfortunate delay.

But alas!  We now have a storm/screen door.  I admit that it does look nice, and it’s convenient to use it throughout the day instead of the large wood door–mostly because the kid either slams it, or won’t close it at all.

As to whether or not it helps with ventilation–I don’t know yet, because since I installed it it’s been about 90 out and humid.  Ohio weather (kind of makes me wonder again why we bothered with this).

I’ll just be content in that it looks nice.

I was talking to my father, as I tend to do, and as what usually happens when I engage in such discourse, especially whilst imbibing, I acquired certain information from a specific point of view and found it interesting.  And so, a blog post is born.

We were discussing technology and the inevitable variances by which the differing generations adapt to it.  It’s cliché, certainly, to envision some old geezer hammering away at a keyboard and yelling at a computer monitor.  For many years, in fact, I provided customer service to such people who couldn’t figure out the difference between a browser’s search menu and address bar–possibly why so many modern browsers have now dealt away with the differentiation altogether.

Of course, I knew the stereotype to be a half truth, and I considered my own father a model example to the contrary.  Dad, a professor, had a history of spending his research grant money on computer equipment, and in fact I, as a child, had been quite enamored by his laboratory on campus.  I willingly accompanied him into work during those summer days of my youth for the sole reason of gaining access to the banks of computers which lined the old slate countertops of those musty rooms.  And, by observation and from rudimentary instruction, taught myself how to type properly on a modern QWERTY keyboard–years before keyboarding was introduced into gradeschool curriculum.

Many years prior, Dad had typed up his doctoral dissertation on an electric typewriter.  And now, while I still can’t hope to capture even his most basic interest in networking technology and infosec, still see the man using modern hardware beyond a simple intuitive ease, but with something approaching mild obsession.  In short–he’s entirely comfortable with modern technology.  And this is a man who has no connective tissue in his leg to speak of (he’s old).

And during this particular discussion, he was musing over his students’ inability to use basic computing equipment.  A particular anecdote involved his class sending him email invites to subscribe to Office 365 (a rant for another time), so that he might log in and view their term papers digitally.  Basically, his students sent him friend requests to a digital subscription service to view their shared documents…rather than use a printer.

Of course, I have written about the evil contrivances we call “printers”, but that’s besides the point.

But anyway, Dad told me this story because he had been approached for his thoughts on how his aging generation anticipates adapting to our world of rapidly-changing technology, to which he responded that the youngest generation doesn’t know anything about using current technology, and so such concerns were misguided.

As a point of comparison, I thought about young drivers and realized that the youngest generation doesn’t know how to operate motor vehicles properly.  But then again, neither do most people…and most people don’t really know how to effectively use modern operating systems, or we wouldn’t have Windows 10.

Sooo, I guess my point is that expectations are higher than reality and generational gaps have nothing to do with an individual’s ability to learn and adapt…to a point.  I mean, old people still need to stop driving, but I also don’t think most people are competent enough to handle the responsibilities of the Internet either.  Hmm–a conundrum.

Besides, would you rather I write more Science Fiction?  Or poetry?

Tomatoes lie dead.
The wildlife is hungry.
I am seeing red.

Earlier this year I wrote about the shortcomings of on-board car diagnostics and how I was searching for a computer-reader that would provide more information in the event of a problem.  Like a fire extinguisher, it’s something that I had hoped to never need to use.

Less than a year after purchasing the CR-V, it died in a grocery store parking lot.  I, being at work, dutifully responded to my wife’s texts in a most timely manner–an hour later–and was off to save the day…cursing and muttering the entire way.

The vehicle, refusing to start, notified me of such by informing me that the parking break was malfunctioning, as well as the antilock breaks, and the electronic break stabilizers, and the gate lift mechanism, and a number of other systems.  It was disconcerting, but not very helpful.

So I plugged in the OBDII device and waited while it ran a diagnostic.  It then informed me that two systems had insufficient voltage to operate.  I cleverly deduced that voltage insufficient to operate the breaking mechanism probably meant the starter wouldn’t work.  I’m a real mechanic I am. 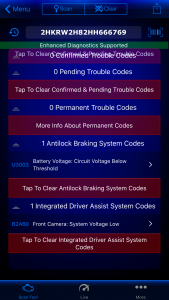 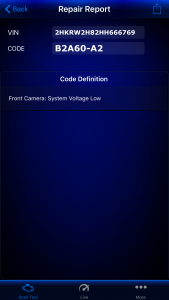 So I jumped the car and it started, and it promptly died when it got home.  Presumably the battery was bad, but that seemed unlikely given how new it was.

AAA agreed, once they came out and tested the electrical system.  Surely the battery was fine, and something was drawing power when the vehicle was off.

Then the Village Elder came over and gave us a charger, and after manually giving the battery a full charge, I tested it an hour later and it had already been drained.  Ultimately, a replacement battery seems to have fixed the problem, though we’re still left wondering why the original died so quickly.  Maybe it was just a lemon.

I’m also left with the nagging irritation at Honda’s dash alerts.  While telling me that every electrical system was malfunctioning was technically accurate, it wasn’t very practical information, especially considering the error codes themselves had the information we needed.

Oh well, at least the computer reader proved its worth.  I can finally give it a solid recommendation now.

In the spirit of summer, I’m going to post some produce pictures.  Mmmmm, tomatoes. 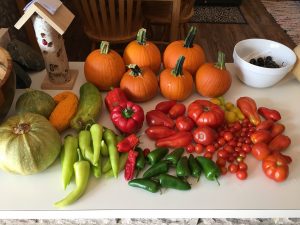 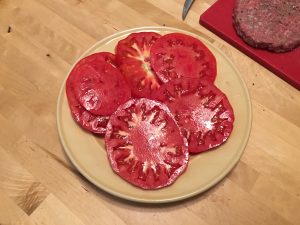