2 years prior, Liz planted garlic.  We then harvested that garlic the following summer.

This year, that same garlic patch sprouted again.  Apparently, not all of the seed garlic had been harvested.  I’m new to garlic growing, so I’m uncertain if this is expected growing behavior or not.  Regardless, we sure did get a nice bundle, however unexpected: 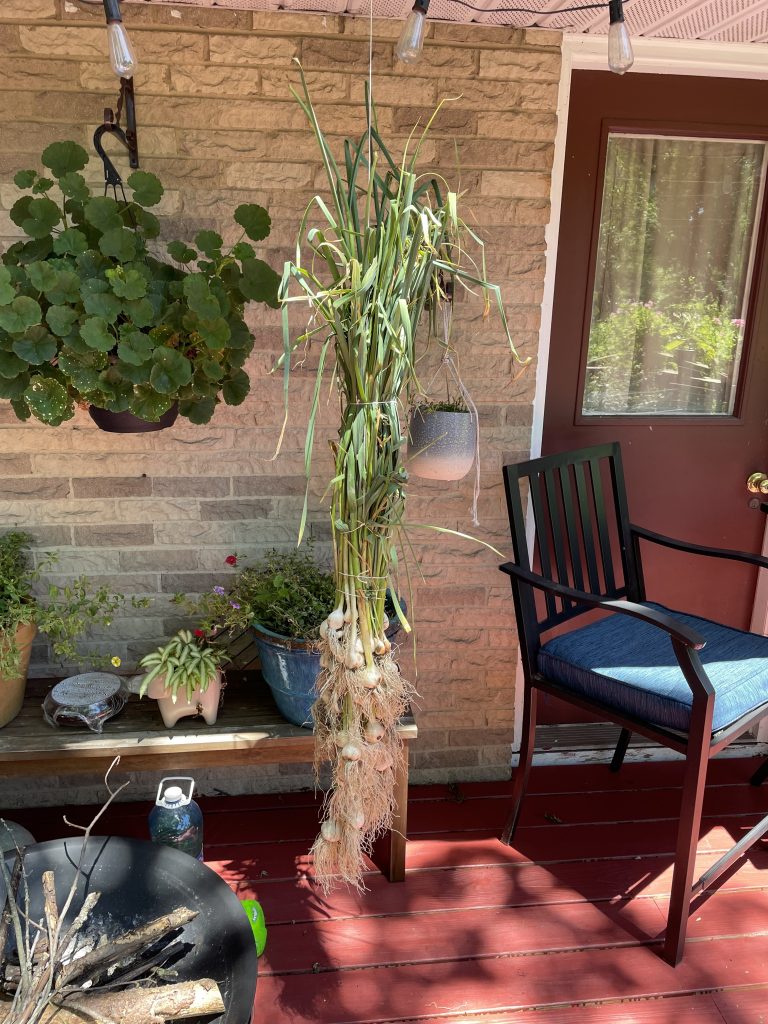 Maybe the trick is to grow in patches and harvest every 2 years.  Or maybe it’ll come up again on its own.  Dunno.  Plenty of cooking to do in the meantime!

I like the concept of naming one’s home, but never fully jumped on board with the idea.  And I think it comes down to the fact that the names fail to recognize the place itself.  Instead, when I hear someone mention a named plot of private property, it’s for the sake of status.  Such is the case with celebrity locales, HOA neighborhoods, crappy apartments that try to sound better than they are, and sports arenas (which are really just sponsor plugs).  Sometimes small businesses choose a name that reflects the space, but more often opt for a more descriptive name which references what that business does.

So how would I choose a name for my small estate?

In order to avoid making it about me, I should refrain from explaining what I do with the property in the name.  Our love for dogs prompted some cutesy thoughts, such as “Whippet’s Run” or “Feisty Fields”.  But, the dogs are transitory inhabitants.  Also, we’re a somewhat sarcastic family.  The name should have a bit of snark, and reference what will always be here, devoid of the goofy romance with which people try to make you believe that they live in a British cottage overlooking Dover.  No, this is a contemporary abode in a neighborhood with well-funded public amenities, and the standard homeowner/municipality friction that always accompanies such developed areas.  The name should allude to that fact.

It needs to be an honest name with snark that only calls out what the property itself is and the type of place in which it resides.

Welcome to “Easement Acres.”  Call before you dig.