It’s a bit of a mixed blessing, but it can be a tad irritating when a company decides what’s best for me without my consultation.  To some extent, we opt in, either through conscious choice or implied by purchases; and in so doing, we are putting our trust in the companies we choose.  But there’s a fine line and it’s easy to cross.

For example, given the ongoing drama surrounding internet encryption standards and certificates, a certain trend has developed in which browser vendors have leaned towards becoming a tad…snarky with their judgments.  For example:

This connection most certainly is secure, to which the browser will even attest upon closer examination:

Without authentication doth not exist security, irrespective of the level of encryption.  And since the certificate for this site is self-signed (due to a lack of practical alternative options–since it’s my edgerouter), the browser cannot effectively authenticate the source of the encrypted connection.  Therefore, said encryption is useless if one cannot confirm to whom they are communicating.

I know the certificate and server are legit, and have accepted the certificate as de facto trusted and indicated such to my browser.  Yet the browser has the audacity to assert that the connection is not secure despite this.

It’s a step too far I say!  I angrily shake my fist at the monitor and log in anyway.  Fuck you!

In the suburbs, a man confronts his wife with pressing news as she’s otherwise engaged in domestic routine.

MAN, weary from a day of work, holding iPhone.

“Well that’s irritating, I updated my VPN app, and there’s apparently been an Apple framework change to how VPN sessions are handled.”

Man glances to wife to see if she’s listening.  She gives no overt indication that she is.

“Grab that blanket and pull, will you?”

Man grabs sheet and stretches to side of bed.

“Before, it used to keep an open tunnel when transitioning across cellular and WiFi, but now it seems to lock the session.”

“I bet it’s a security restriction, that it’s now locking the client IP per session.  If I disconnect and reconnect, it establishes a new session just fine.”

(Gesturing)  “Pull the blanket to your side.”

“It’s just irritating that I can’t roam between access points anymore.  I guess there’s no real reason to have it running at home, but that’s less convenient.  I wish I hadn’t updated.”

“Are you listening to me?”

“I don’t use that and I don’t know what you’re talking about.”

And as I trudge through the bleakness in my MUCK boots (which are awesome, by the way), I ponder the meaningless of the human existence.

Okay, not quite, but a general lack of distractions when it’s cold and dark does tend to condition the mind towards a gnawing hopelessness.  And to validate that such feelings are not unique to my own winter slump, I booted up a game I hadn’t played in 2 years: Tom Clancy’s The Division. 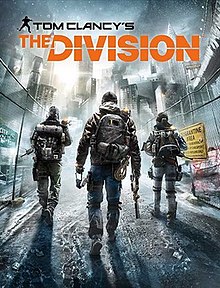 If you know anything about the Tom Clancy universe, it’s an unapologetic argument for extreme right-wing executive enforcement of national security.  Clandestine operations?  No problem.  Spying?  No problem.  Anti-terrorist death squads?  No problem.  And so on.  And whatever my political views on these activities might be, in a simulated world, it’s damn fun to live an artificial life of justified violence and power without accountability.

To summarize the plot, a manufactured virus is unleashed in New York City.  Its 90-something % mortality rate destroys modern society, survivors struggle to stay alive, the predictable scum of humanity form coalitions and prey on the weak, and a branch of Homeland Security sleeper agents are activated and sent in to restore order (AKA shoot every criminal possible).  It is an oddly believable premise for a story–not to mention unsettling, to roam the largely vacant streets of a large metropolis, no longer feeling remotely safe to be outside.

It caused me to consider a pattern among video games from the last few years: societal collapse and annihilation.  The trend seems to have started with Fallout 3, which came out right as the recession hit.  Of course we had Fallout 4, and Destiny (which is a little further removed from the collapse but still a major theme), and the Metro series announced a sequel, and we got a teaser for Anthem–which looks Destiny-ish in its post-collapse (as opposed to post-apocalyptic, a subtle difference) theme.

It’s easy to understand the prevailing nuclear apocalypse theme from 60s and 70s cinema, given the Cold War, but why is this such a commonality now?  Naturally, I jumped online to examine this phenomena–or rather, I Googled a few phrases to reduce what might be a lengthy academic discussion to a few hundred words.  Don’t judge.

The conclusion–we romanticize a simpler existence and hope for the fall of government corruption, even at the expense of losing our luxuries.  In reality, I doubt anyone would consciously choose that existence, but as I mentioned earlier, it’s fun to pretend.

I’m going to go shoot more New Yorkers now (now that’s a cause I can get behind).

Poppy is getting older, now to the point where she’s getting her adult teeth in.

I always wondered where puppies’ baby teeth went.  Presumably they fall out, but I had never found one after that.  My guess was that the dogs would eat them.

But then we found one on the kitchen floor:

My attempts at growing basil inside have been technically successful, but basil really doesn’t appreciate the scanty light provided by fluorescents, lending me to believe, as I had suspected, that the photos of those green and busy basil plants on the boxes of grow kits to be bullshit.  Even so, they managed to flower (which means they’re not happily making lots of leaves as they should): 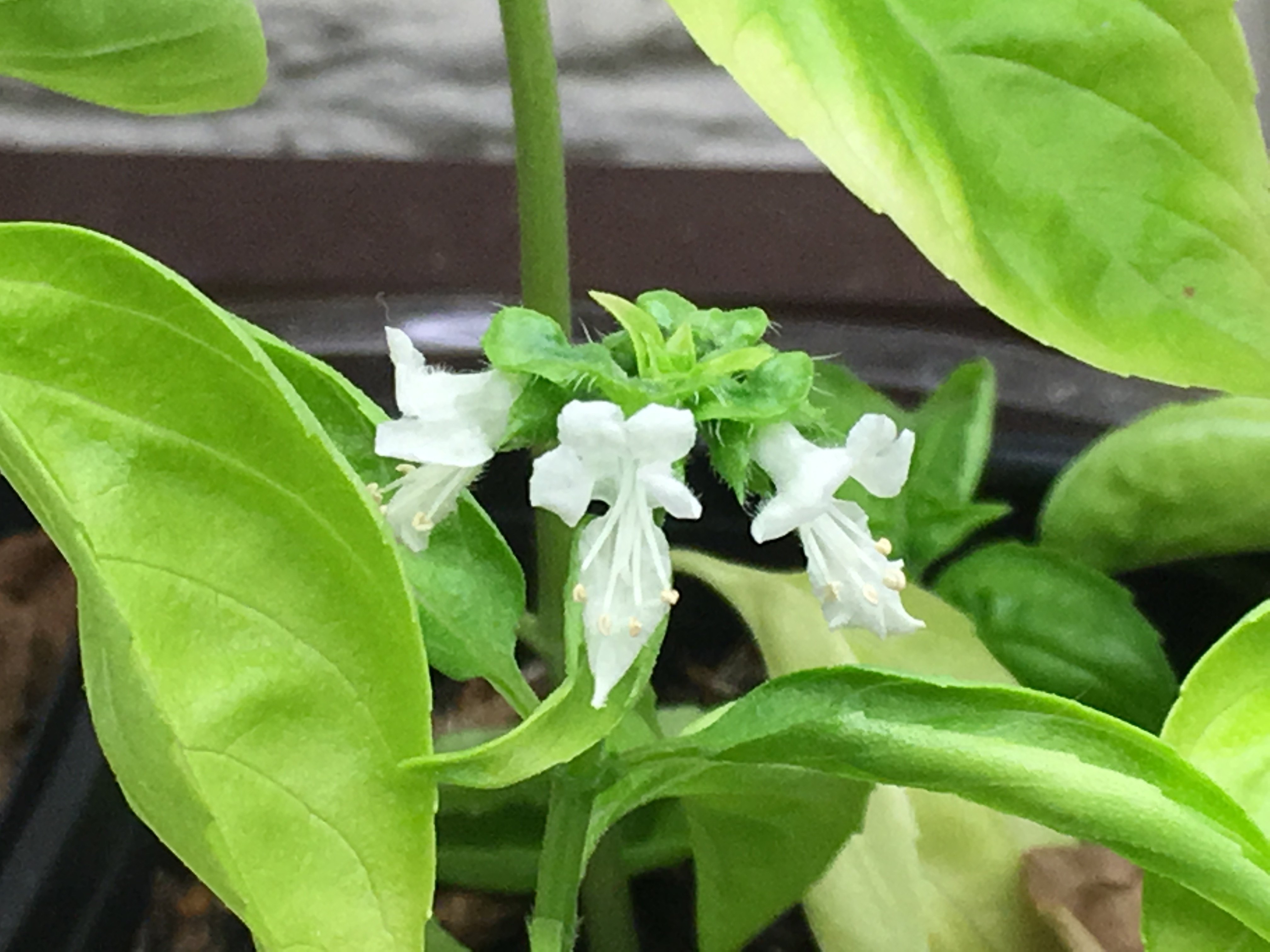 One of the plants that’s historically been really easy to grow inside is sage.  We have no need for more sage plants, but I started this one because it’s from the seed that my first sage plant produced–the one in the pot that I started from seed years ago that finally went to flower.  I’ll probably gift this one: 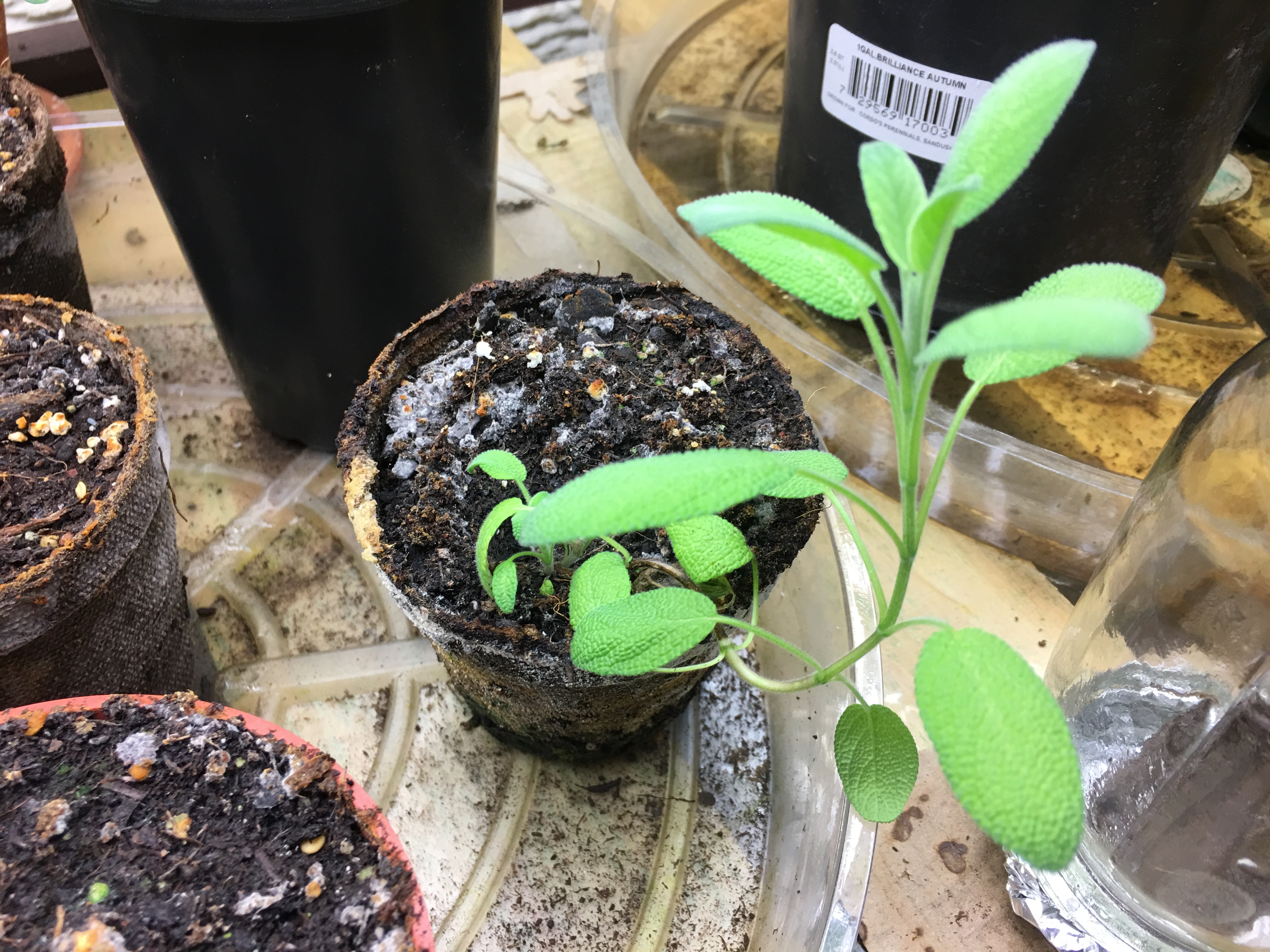 After the aphids ravaged my pepper plants, I had been struggling to get a new one to germinate.  Last year I learned that starting them around December/January gave them the time they needed to produce.  But pepper seeds are lazy, and I had been becoming dismayed.  Thankfully, I finally saw a sprout: 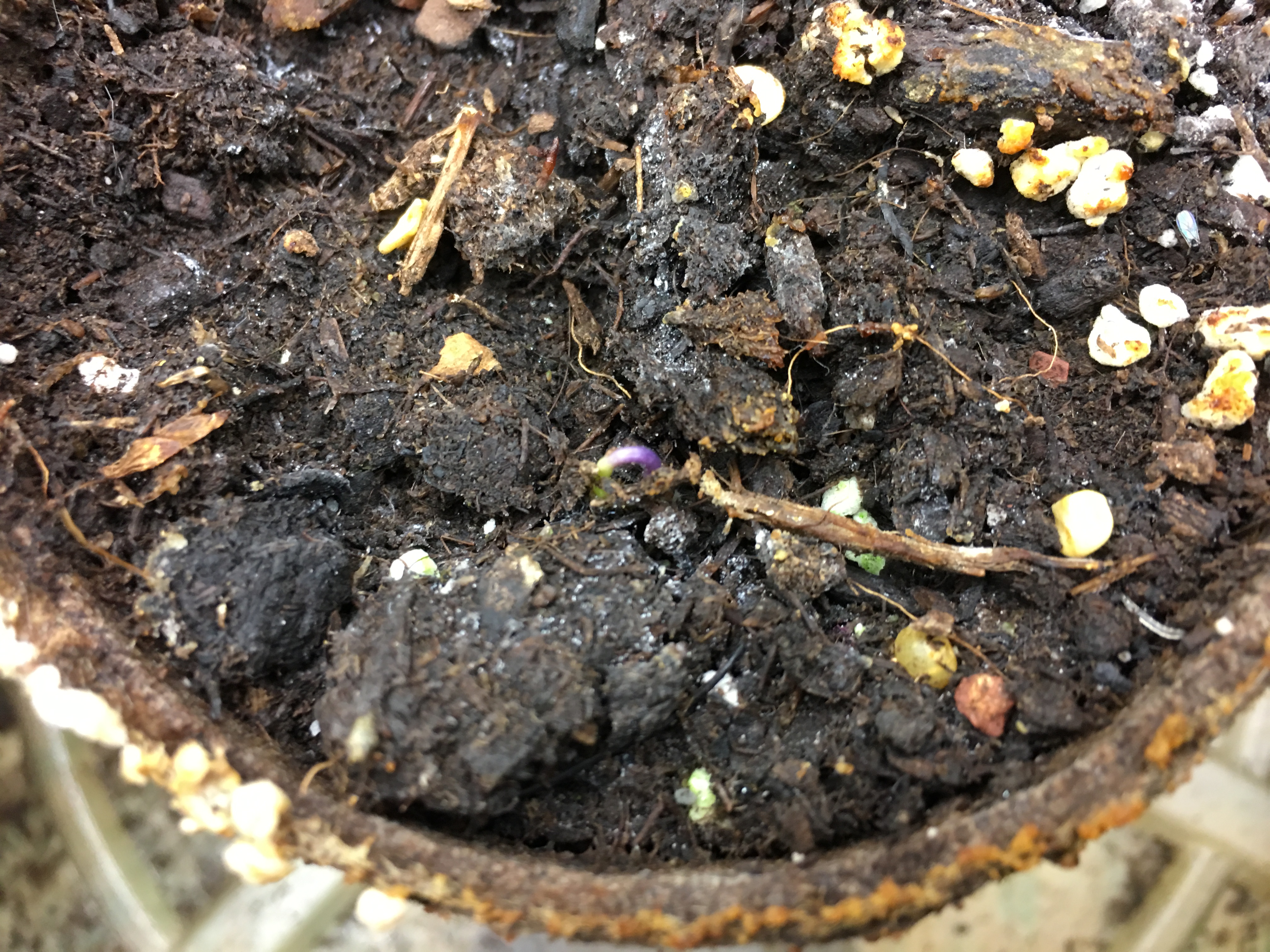 This is an attempt to grow an aloe plant from part of a leaf from a grocery store.  I’m curious, though not terribly hopeful: 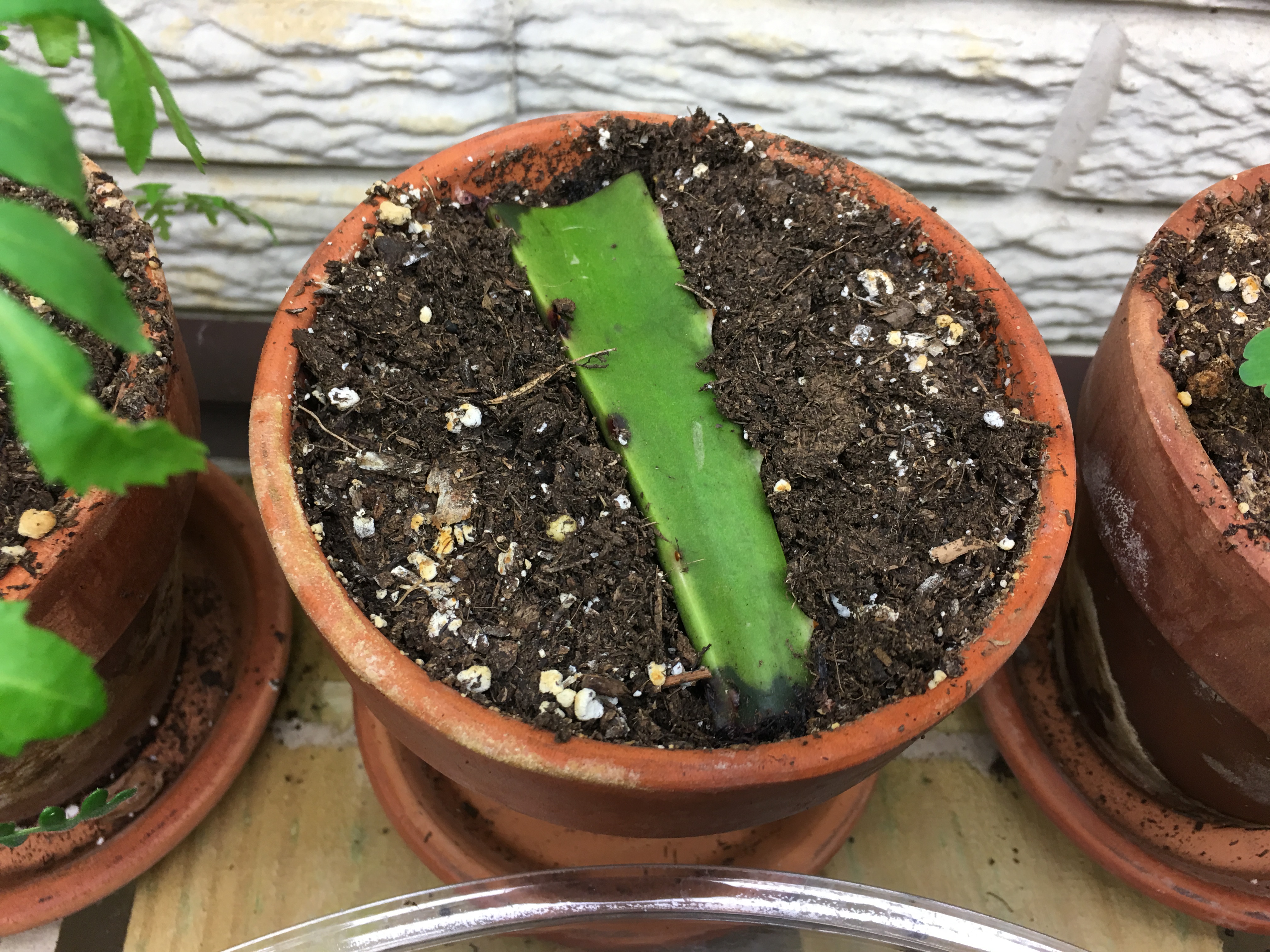 And lastly, here’s an assortment of things.  There’s the rhubarb plant I’ve overwintering until I get it in the ground, as assortment of beans I was forced to plant as they were starting to mold, the poinsettia–awaiting next year’s festivities, an annual whose name I can never remember that we call “The Vegas Plant” (overwintering), and another potato–grown from salvaged kitchen scraps: 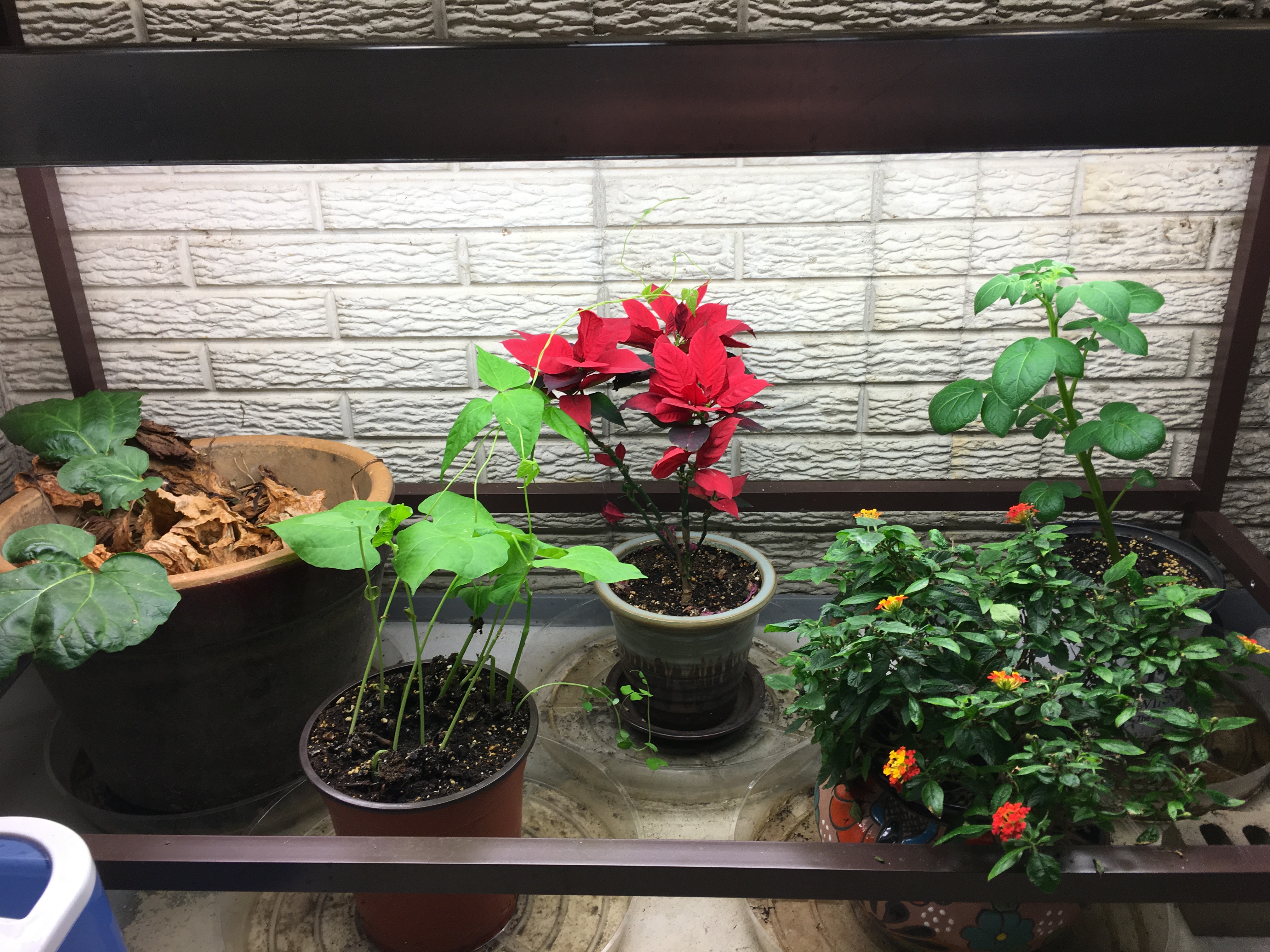 We’re fully in the winter slump now, but I still have my little patch of green.