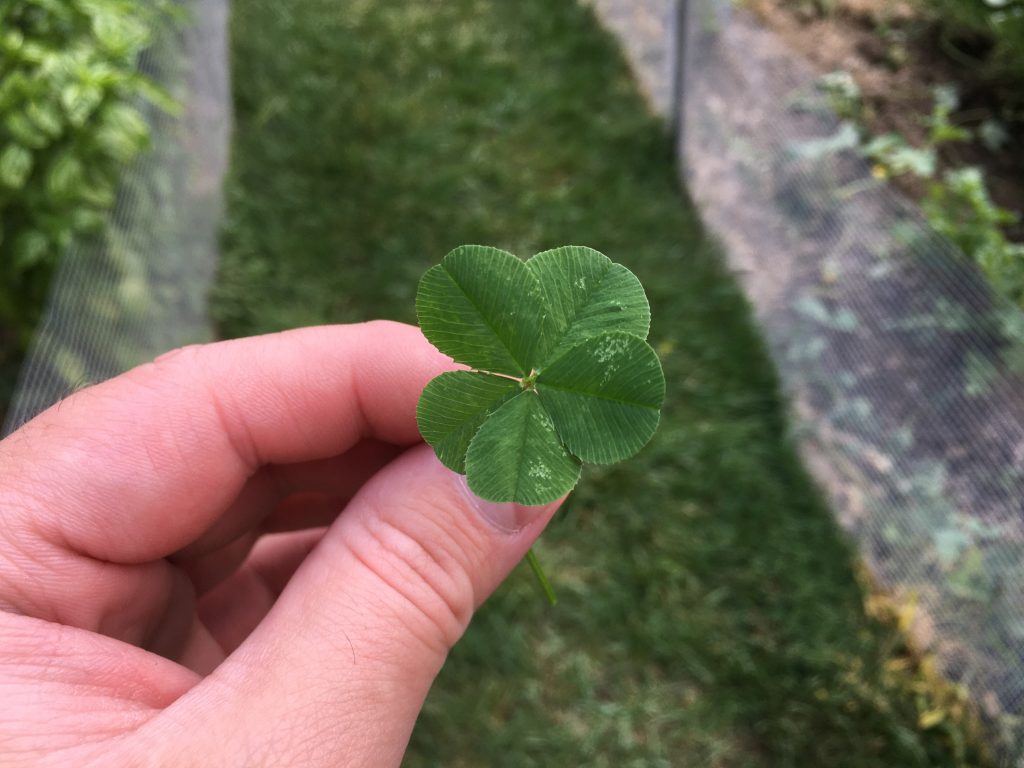 I have a strong disdain for anything marketed as “tactical”.  Here’s why:  tactical = meant for harming people = not meant for anything reasonably practical that you might actually use the item for.  Are you really prepping for the inevitable murder, or just making too much money that drugs and hookers aren’t doing it for you anymore?  Here’s some tactical examples:

Tactical firearm = AR-15.  Not practical because you can’t hunt with it (and you sure as hell shouldn’t).  A .223 is good for shooting people and some varmints, and if you hunt the latter, be a little more sporting and get a bolt action rifle.

Tactical knife = anything with serrations or an aptly-named tactical point.  Good for stabbing people and opening field rations.  Not effective at skinning animals or carving wood.

Tactical flashlight = overpowered and strobe function.  Too bright to maintain night vision and extraneous modes not useful for anything beyond blinding people.  And my favorite–the hard nub on the butt meant for bashing skulls.  I can’t even stretch my imagination on that one.

So, is there any reason to actually buy something tactical, if you’re not military/police?  I will tell you: probably not.  To do so is to believe that a weapon’s primary function should be to shoot people, presumably under the belief that doing so will become necessary under a societal collapse, and that roving bands of raiders will come to take your food.  I argue, however, that you’d be much better off buying a weapon whose primary function is to shoot animals (you know, to acquire food), with the understanding that it can still be effective for defense situations (are you really going to get off 12 shotgun rounds?), and can even be modified for that purpose were the need to arise (swap barrels/magazines).  See?  Survival first requires you to feed yourself, and a tactical weapon therefore will be of much less value.  If you don’t have any food to steal in the first place, no one’s going to come gunning for you.  And if they do and you shoot them, you still don’t have any fresh meat (cannibalism aside).  Sure, you might now point out that all your prepping supplies preclude the need to hunt, and you might be right, at least for the short-term.  But thinking long-term, you still need to hunt.  And thinking short-term, you’re not going to be able to defend yourself against a band of much younger men with more guns just because you bought the tactical variant.

Although, if you plan to be one of the roving raiders yourself, tactical weapons make more sense.  Then by all means, buy tactical, you sociopath.

I’m guessing we have video games to thank for the tactical obsession, because for a lot of people that’s their first encounter with a gun, albeit virtual, and so don’t know otherwise; and the fact that most shooting in games is of the people variety; and modding guns in games with tactical loadouts is just plain fun, too.

Google “tacticool” for more examples.  Yes, there’s an internet community of people laughing at you and your gun.

Okay, I had to get that out of the way.  Thanks for listening.  Now for the real post: I bought a gun.

Why did I buy this?  Well, because I hunt.  The old single shot break action 20 ga. that dad bought me when I was 16 has certainly bagged its share of woodland creatures, but it did have some limitations.  Range was one of the bigger ones (I’ve been know to sprint across open clearings to make a shot).  Using anything smaller than #6 was pretty ineffective beyond 10 yards, and steel shot was nigh impossible.  #7 1/2 works for skeet, but squirrels don’t shatter if you accidentally drop them.  I also considered trying some waterfowl this year too.  So in order to be effective as well as humane, I wanted something more powerful.

I also wanted Remington over Mossberg.  Personal reasons there.  I won’t get into that flame war (I don’t care if the US military uses Mossbergs.  I’m not shooting people, remember?  Also, the military’s decision to use a particular weapon design doesn’t necessarily equate to reliability.  See the early deployments of M-16s in Vietnam, for instance.)

But I admit, I did mod it.  I didn’t tacticalize it, but I did make some additions.  Hunting-related additions, not tactical additions, to be clear.

And tacticality aside, I keep it stored with 00 buck, so I can still shoot roving raiders if needed. 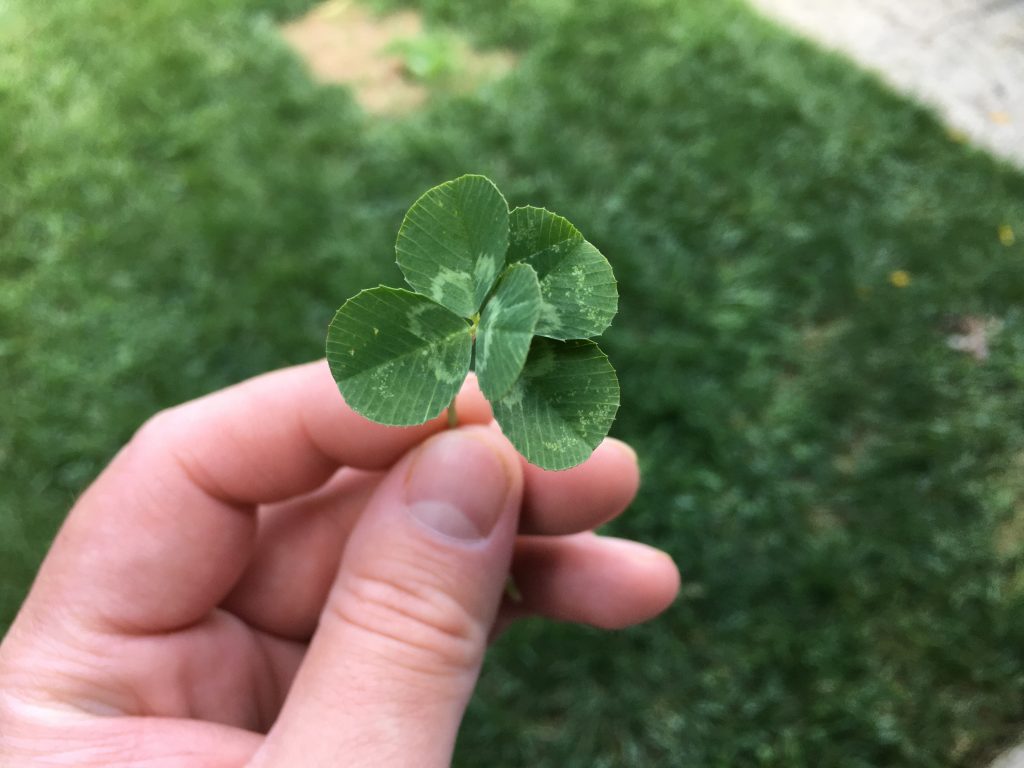 I’m up 10% on my index fund experiment.  Maybe I’ll get rich after all.

Case in point: Mediterranean Sausage Bake.  This abomination, a recipe of my mother’s, involved baking zucchini with eggplant and onions, with some cheese and sausage for flavor.  It was disgusting, but a favorite of dad’s, so each Father’s Day we lived the nightmare.

So anyway, back to present, I have a lot of squash.  Ronde de Nice, specifically.  And dad was visiting.  It presented an opportunity to unload some of it.  The plan was to cook him the sausage bake while we ordered a pizza.  And yet… 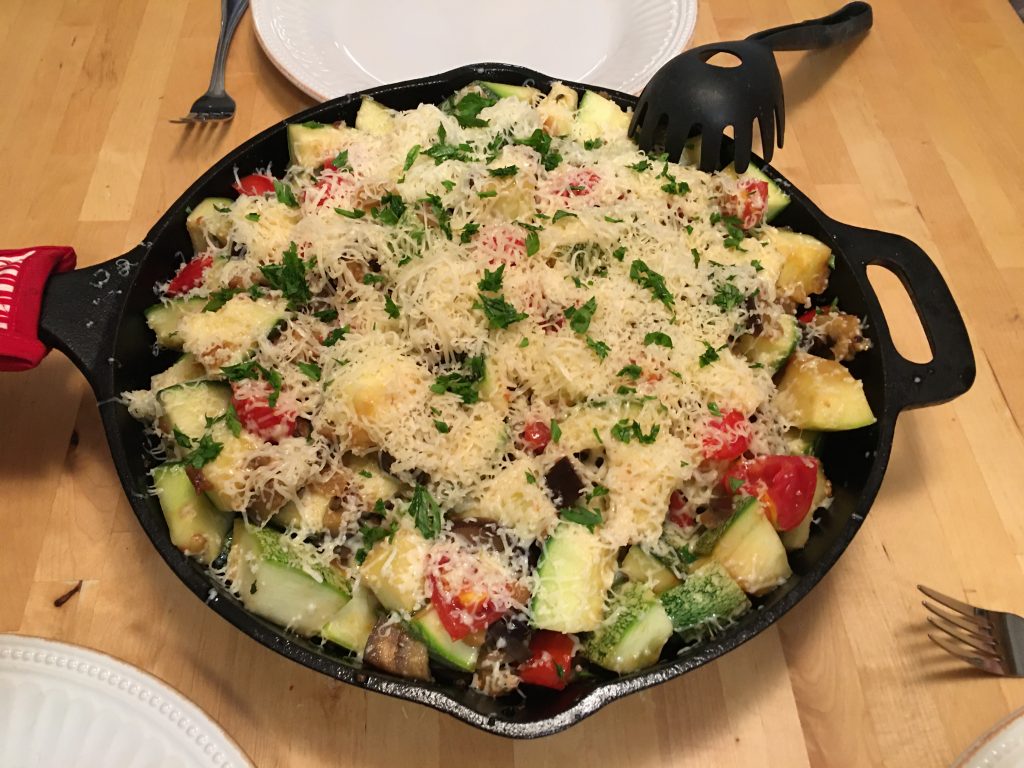 Okay, so I used a lot more cheese, but still.  It warranted a taste.  And it was…reasonably acceptable.

Maybe I used better sausage.  Maybe the Ronde de Nice was better than standard zucchini.  Maybe I sweated the onions better.  Whatever the case, it was edible, and a way to use up some garden produce. 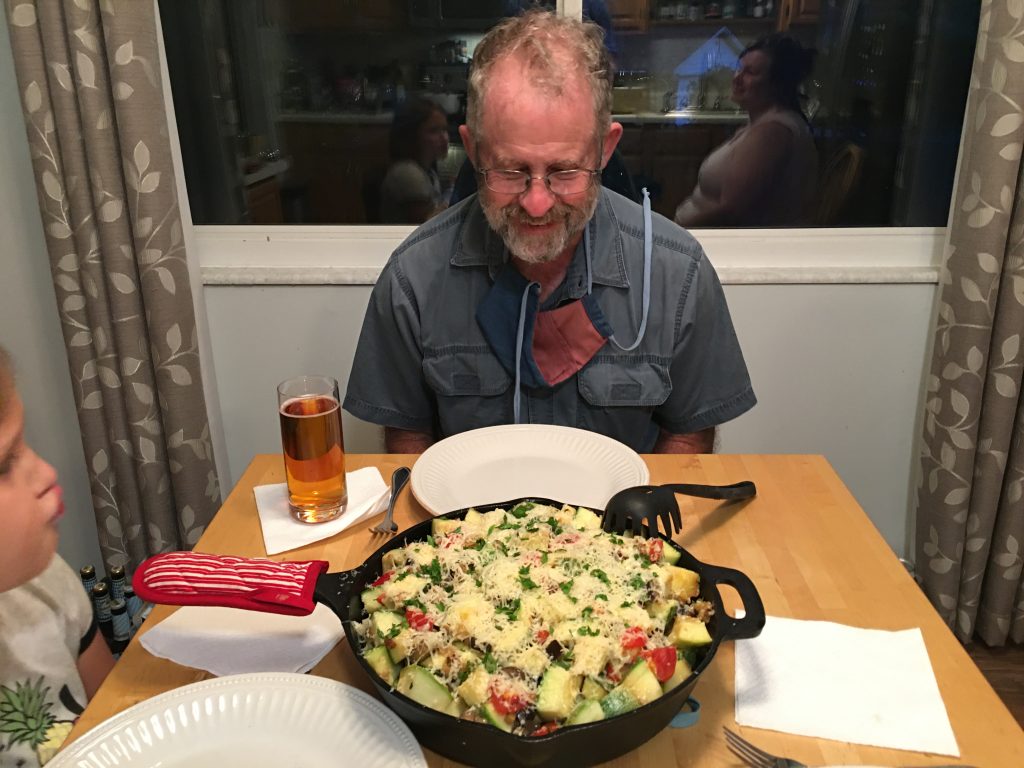 And it made the old man happy.

More cucurbitas.  Though not the ones I intended. 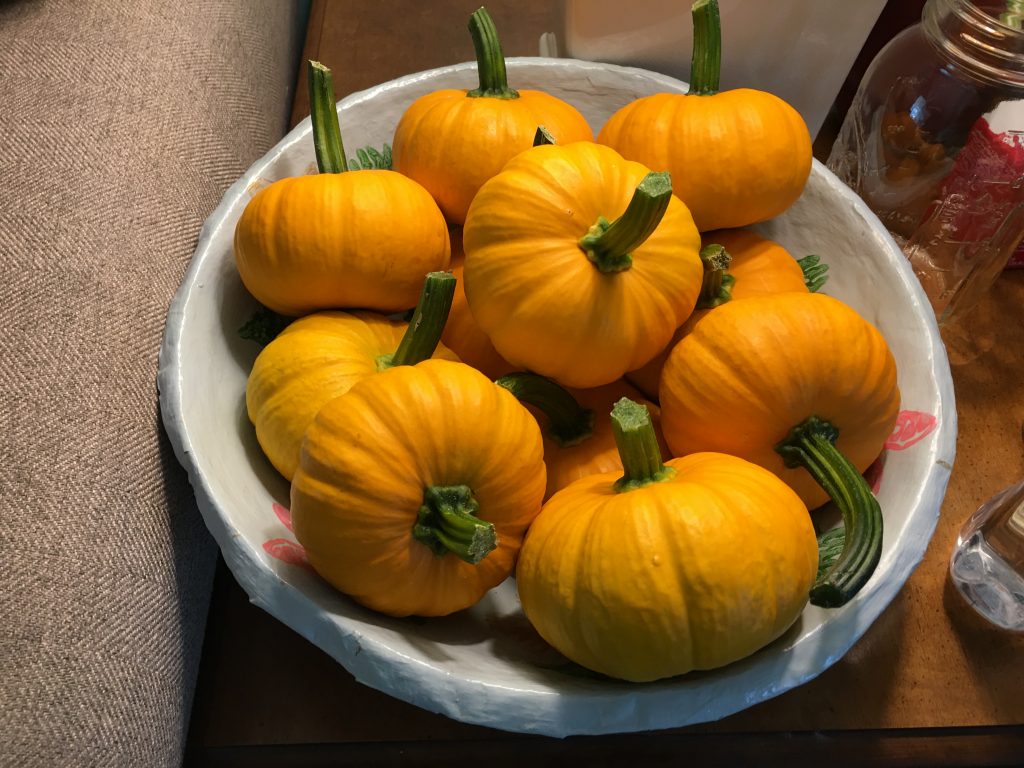 But at least we’re getting a lot of fall decorations–arguably a better purpose for cucurbitas anyway.