Legend also tells of cultivated Kentucky bluegrass on a certain suburban plot in southwest Ohio, whose roots seem to almost match that depth.

And as I set about removing it with shovel and mattock, I can understand how sod created an effective construction material for homestead abodes.  And I also wonder just how much effort excavating enough sod to build a structure required.  Such is the tenacity of desperation.

I, however, opted for power equipment.  But my tiller was also built for pre-cultivated gardens, and so lacked the power to unearth grass.  Fortunately, the neighbors lent us theirs.  It’s ironic, that their equipment selection was intended for raised beds, which definitely did not need the ridiculous horsepower that their abomination possessed, however useful in our case.

It was powerful enough all right, but not heavy enough.  It took all my strength to hold it in place while it excavated.  Or perhaps I simply lacked the aforementioned tenacity of a desperate settler.

But it had to be in this spot: high heat and direct and lengthy sun. 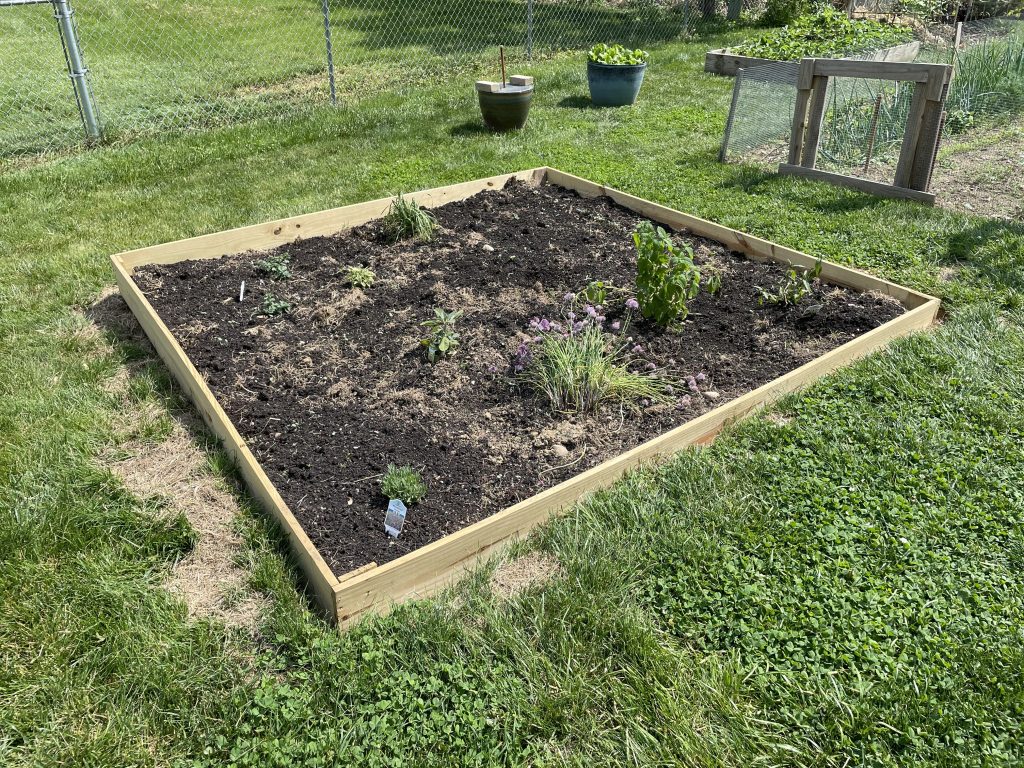 And I am tenacious about delicious cooking.

During the Lubbock years I had a healthy relationship with girls as a whole, once I got over that awkward period of novel emotions and endless jibing from my parents, and accepted the naturalness of physical attraction.  Of course, in those early days, consorting was limited to hand-holding, sneaking hugs, and private conversations; but at the time, such simple actions held profound meaning.

So when we made the move to Toledo, and disrupted my friendship circle, and forced me into a vastly different culture (the Midwest is very different from West Texas), my solitude and slowness to adapt didn’t earn me too much positive attention from the Ohio variety of girl, which spiraled me into a new form of loneliness I had never before experienced.  A couple years of general sexual rejection would certainly be a rough spot for anyone in their adulthood, but it was especially tough during adolescence.

But there was one evening I was at a small gathering.  I had some friends by that point, and while the group was never terribly wild, it was still a nice respite from the overly-controlled atmosphere at home.  And there were girls who would talk to me.

I ended up alone with one particular girl, a pretty and flirtatious redhead, homely yet her eyes hinted at something enticingly troublesome.  She was, however, a freshman, and in those high school days that was strangely important to not be seen with an individual of such low social class, however falsely fabricated the concept was.  That image of status was sufficient to prevent me from pursuing her, for better or worse, though rather silly in hindsight.

But on this night, we walked together in the fading light and found ourselves alone, behind some trees.  We loitered there for a moment, facing each other.  She looked at me expectantly.

To this point, gentlemanly conditioning or pure cowardice had limited my physical involvement with young women–at least the ones who didn’t reject me outright.  But for the first time since Lubbock, I didn’t feel those reservations.  And I was older than I was in Lubbock.  Social activities had advanced beyond simple hand-holding.

Girls were also more developed by then.  I distinctly remember the pleasant novelty of my hands on her waist, pulling her feminine curves against me.

The rest of the experience requires no elaboration, suffice to say it was still restricted to educated white middle-class upbringing and expected social norms.

After that night, I still saw her at other gatherings, but I don’t remember talking with her much.  And eventually, as what happens to so many acquaintances over time, she faded away.

This memory is, unsurprisingly, very vivid to me, as I’m sure most of us have a similar story.  But…

One day I was organizing the basement and found my high school yearbooks.  I thought I’d look her up and see how well my memory matched the photo.  Except…I couldn’t find her.  She didn’t exist in any of the 3 yearbooks from my time there at that school.  It’s possible she attended the other high school in the city.  Circles of friends often overlapped districts.  But it is odd that I wouldn’t have remembered that part.

There’s a bit of a mystery here, possibly hinting at my level of sanity in those formative years, but I think I’ll just leave the mystery alone.

I’ll start with some factoids:

Their base importance not only motivated humanity from hunter/gatherers into farmers, but also provided the caloric excesses needed for civilization.  Without them, it would be impossible to maintain a population of any significant size.

We have three natively from the Americas: maize (with which we had some pretty limited success), sweet potatoes…

The Most Nutritious Vegetable

…and potatoes.  So it’s no surprise that they all hold a position of importance in our cuisine.  That is, we’ve found many creative ways to make them super-delicious.  Specifically…

My prior attempts were half-hearted.  I used volunteer seed potatoes from the grocery (or rather, potatoes which got left too long in the basement), and employed a trench and hill method.  I still netted 10 pounds, which isn’t bad considering they were “essentially” free.  But this year I wanted to try something a little more dedicated: a potato box.

Potatoes, like their nightshade cousin tomatoes, do not rot when their stems are buried.  Rather, they expand their root systems.  This is universal knowledge, but potatoes are tubers which grow on the roots, so more roots equals more potatoes per plant.  This requires continual burying of the plant as it grows, which in turn requires more dirt, which then requires more supporting structure to contain that dirt.  But building a tall box restricts sun.  Therefore the box must be constructed as the potatoes grow.  Needy buggers, those potatoes.

So my solution was to build frames and stack them with pins as needed.  Half frames, specifically, so I can store them efficiently.

And since I clearly have you gripped in anticipation, I’ll answer your next question: “What did you use to cover the growing potatoes, Simon?”

I will tell you: the compost from the prior year’s yard waste:

Look at me being all recycling and environmentally conscientious and such!

These suckers are quickly outgrowing the box.  I might need to add additional tiers.

If this works, I’m also going to need to work on that root cellar.

It had snowed.  Enough to cover the grass.  It never snowed that much in Lubbock.  I was privy to the scene first, as for reasons that still escape me, thawing the family rabbits’ water bottles in the pre-dawn days of winter was my job alone.  And in order to be ready for school on time, I had to rise before my sisters.

After the completion of the chore, I admired the rare moment of scenic beauty.  It almost seemed a tragedy to walk through it, so I made some snowballs at the lawn’s periphery.  The snow packed well, as it was barely below freezing.  I rolled some larger snowballs.

But there wasn’t sufficient time to build.  I needed to get ready for school.

The snow would be long-since melted by the time school let out.  So I did what I often longed for whenever I saw movies with snow in them.  I walked across the lawn.  It was my first recollection of such an experience, and for that momentary transit, I felt like I was truly in the wilderness.

Then I saw my sister’s judging stare from the window, obviously displeased that I had destroyed the perfection.  But it was jealousy.  She didn’t wake up early enough to have time to play in the snow, so instead she channeled her disappointment at me, for having the audacity to ruin the one way she was able to enjoy the snow: from the window.

I smiled knowingly, and mockingly, back at her.

And the snow was gone by the time school let out.

I had an idea.

If the summation of life’s experiences determines the uniqueness of the individual, then that individual is essentially defined by fragmented recollection of chance events.  And if the mind degrades with time, those records are obviously misconstrued, which means my ego is based upon…corrupted and incomplete data?

Anyway, I thought I’d write some of those mental images down, for if those brief experiences are still remembered from the lengthy chronological stream of my consciousness, they must have had a strong emotional influence at the time.