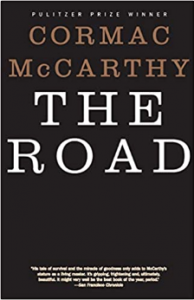 I call this, somewhat unsubtley, the suicide month.

So what better time to pick up a classic post-apocalyptic novel that’s been on my list?  That’s right, go all in!

In short, it’s the story of a man and his son.  The man tries to keep his son alive by scavenging in a nuclear-ravaged wasteland while traveling south in a bid to survive the oncoming winter.  In so doing, he attempts to maintain certain higher standards of conduct which most have abandoned for the sake of basic survival, and instill them in his charge.

The book’s been around for a while now, so there’s reviews a plenty if you want to delve into the discussion.  And like all renowned creations, there’s volumes of criticisms.  To save you time, I’ll reduce them down to the top two complaints and comment on each:

It does ultimately end with a glimmer of hope, that the ethical codes are not extinct.  It’s a depressing journey, but a good one for the heart of winter.  Keep the fire. 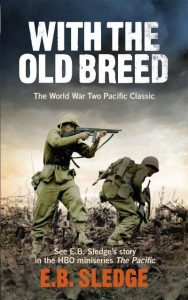 This book has been on my read list for long time.  And perhaps due to my old man mannerisms, I finally sat down to read this war memoir.

And it is just that.  The author, Eugene Sledge, having researched and compiled the historical errata to accurate specifics, and having completed this work much later in life, created a perfect balance of fact and personal observation.  He never strays too far into emotional content, but through his directness (indicative of the academic he later became), one can clearly extrapolate how he felt at the time.

It is a story of the Peleliu and Okinawa campaigns of World War II.  A historian myself, if I can so make the claim, it was not the first time I had read about these particular conflicts.  It was, however, the first time I had read them through a firsthand account.  And as I’ve stated, I believe it is these records of the common man that provide significant historical value.

The nature of this work renders it beyond my rights to critique, so I will leave it at that.  If you want a primary source account of the two arguably most bloody Second World War campaigns, free from political asides and excessive loaded personal annotations, I have yet to encounter a finer example. 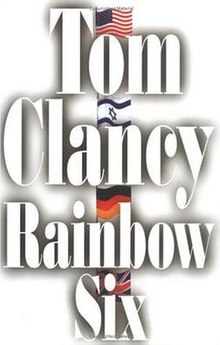 I’ve always been a fan of the Rainbow Six franchise, mostly because it’s an unforgiving tactical shooter, and rather unique as a result.  The player can’t absorb bullets, gasp for a bit, and then recover like so many other shooters.  Instead, body armor may provide some buffer (in which case there is some pained gasping), but it’s not a guarantee, and errant rounds to the head are always instantly fatal.  Perfect planning is no guarantee in the face of random chance, and failures can even be quite humorous.

But the stories were iffy and unremarkable–and my presumed explanation was that they were an afterthought.  I bought the book for a few reasons: 1) Plain curiosity, 2) It had been recommended to me years ago, 3) I had never read a Tom Clancy book before, 4) It would be a completely new genre of reading for me.

The book arrived from Amazon with the unsurprising promo for being a Jack Ryan novel–amusing, since the book never mentioned the character that I recall.  But I once bought a recent edition of Asimov’s I, Robot and its cover showed Will Smith with the line “One man saw it coming”–the movie adaptation of which had absolutely no similarity to the novel, so apparently media marketing simply just isn’t concerned with trivialities such as basic relevance.  But that wasn’t why I bought either book anyway.

Taking into account the view of terrorism in the 90s, the book begins with a failed airplane hijacking, also serving to provide the exciting hook prologue that so many lengthy novels have, and to set the theme: an international anti-terrorism death squad with multi-national sanctions is born (Rainbow).  It has the classic array of black ops obfuscation: hidden funding, highest-level executive support, clandestine to all outside a circle of “need-to-knows”; that sort of thing.

Oh, and it’s naturally comprised of the best of the best.  Clancy takes many literary asides to point this out.  They are as conditioned as any of the best athletes in the world, extremely experienced, and with no short mention of how many degrees the group possesses.  I knew what I was getting into, but it’s the sort of painful eye-rolling right wing propaganda that politicians and recruiters would like us to believe is the standard for any career soldier.

So who, naturally, should turn out to be their ultimate nemesis?  Why, environmental terrorists of course–the very embodiment of left-wing extremism, especially in the 90s.  Jokes are made about El Niño and the ozone layer, precursor evidence to what we now refer to ubiquitously as climate change.  But oh how it was viewed as such nonsense back then!  Mere consequences of progress, and a couple degrees of average temperature increase surely didn’t mean anything significant.  Oh, and of course the environmentalists are arrogant and unlikable.

Ultimately the environmentalists’ Armageddon plans fail and they flee to Brazil, because you know–rainforests.  Ah the holy grail for tree-huggers.  Rainbow calls in favors to all manner of intelligence and military personnel, because we know how well they always cooperate, and illegally pursues them (Brazil is not one of the Rainbow-sanctioning countries).

Using fancy tech, Rainbow murders many of them before coercing a surrender, detonates the base of operations, and leaves them stranded in the jungle (can’t extradite during an illegal raid of course).  I guess that’s supposed to be poetic justice, but to a rational non far-right citizen, I found it somewhat disconcerting to hear the justification for a police state acting with impunity.  (They also strip them naked first.  Why do military personnel always use sexual humiliation?)  The argument, no doubt, is that some threats supersede our normal judicial processes and need to be countered head-on without the hindrance of red tape, and that most people won’t understand or agree with this need (because they’re not as smart, remember?), and so need to be kept in the dark.

In summary, the story was less than compelling, but the battle scenes were fun.  So essentially, the video games are exactly like the original novel.

At least they kept the theme consistent?

I’ve been dragging my feet with these Narnia books.  Hell, it was back in March when I finished the second one.  The plots kind of force themselves forward, demanding a resolution, but at no point inspiring a lot of empathy for any of the characters.  They also make a lot of painfully bad decisions, but they’re all kids, so I guess that’s the point.  Still, it makes the reading difficult.

But I’m determined to get through these eventually, and I managed to finish The Horse and His Boy.  My initial thoughts were: “Ha.  I get it.  The horse can talk.”  And the story seemed to have used that one twist to drive the plot endlessly.  Fortunately, it eventually delved into more complex scenarios, with more adult themes.  I had to make it about halfway through, but the protagonist got to experience some life-changing events that turned him from an incidental character that forced the story along into a relateable character who inspired my commitment to see the resolution.  The obnoxious horse (and seriously: fuck that horse–I hate it), was revealed to be intentionally irritating, though all worked out in in the end in a way that was satisfying but not overly-convenient for a children’s novel.  There’s even battle, described in a gripping manner, however unconventional.

It took 3 books, but the chronicle is getting darker and more interesting.  Although I don’t really care for that lion.  He seems to be more of an ex machina than Lewis intended.  I get now why people keep trying to force symbolism upon it–it shows up as some sort of Old Testament god, driving events to his will while never really answering any questions, all the while inflicting appropriate punishments at his own discretion.  And while he was critical to the plot of the last book, his presence in this one seems largely unnecessary.  But again, maybe that’s the intent.

If nothing else, this book motivates me to continue with the series.

Sometimes events align in an uncanny relation.  I recently parodied a book from my youth: A Sand County Almanac, by beginning a series of posts from my childhood journal.  I recalled that the book’s setting was in Wisconsin, so when we took our trip up there recently, the book was on my mind.

Then, when driving into town on a liquor run, I saw this: 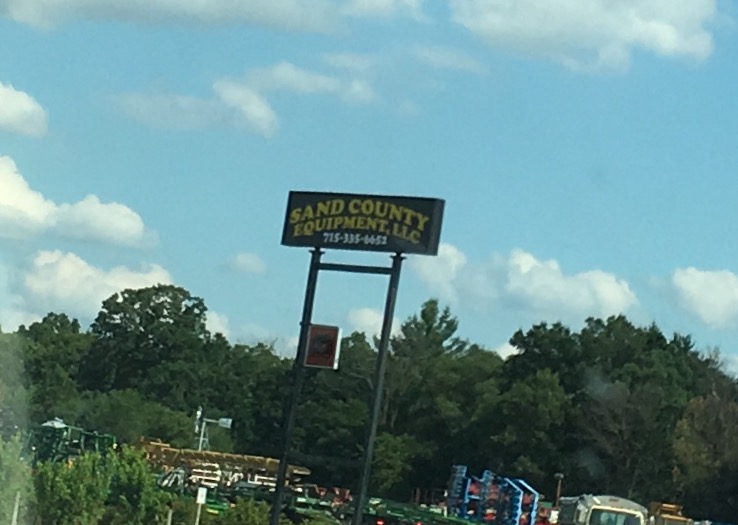 Curious, I delved deeper and discovered that there is no “Sand County” in Wisconsin, at least not as a political delineation.  The name is used in reference to the geographical region of Wisconsin which has sandy soil.  I wondered: how far did that region extend, and was this turn of phrase in the common local lexicon–and therefore this business name being of no relation, or was this business name indeed an intentional nod to the author?

Unfortunately, I couldn’t find a clear physical boundary of “Sand County”.  But the Wausau region is still very glaciated and sandy, being interspersed with a lot of lakes, so I think it qualifies.

Additionally, I discovered Leopold has a historical marker.  Obviously the marker would be placed in the physical region, so I input the coordinates into a map: 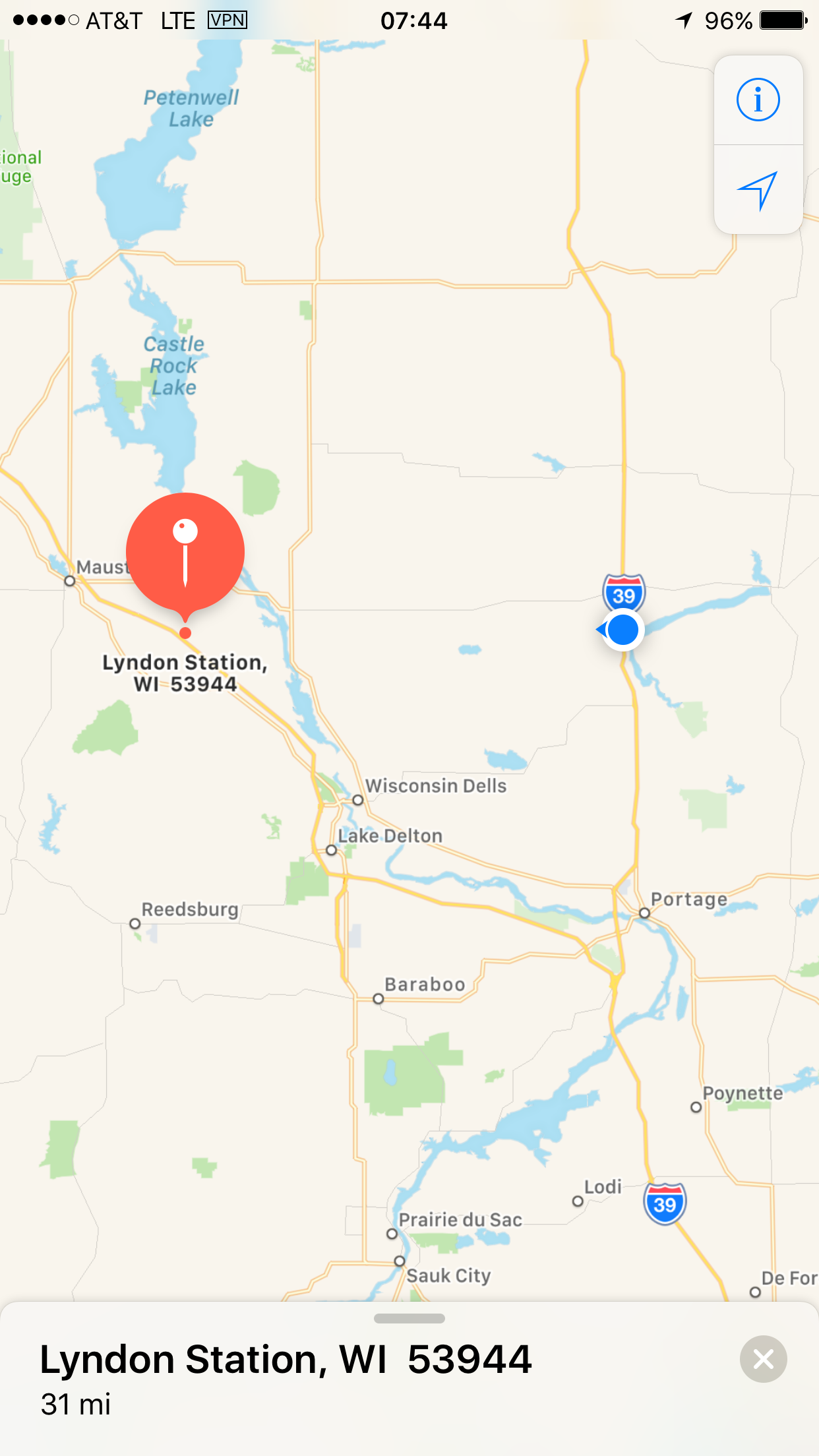 Wausau is about 50 miles away, and on the way home, the closest we got was 31 miles.  So while I’ll never know the above business owner’s intentions, I think this concludes that we were officially in Sand County, and enjoy the historical significance for what it is.