I’ve given a lot of thought to the quality of the air inside the house.  Usually, this train of thought occurs after a sneezing/coughing fit, or after jumping awake due to the early stages of hypoxia.  Which begs the question: why as a species do we even suffer from allergies?  I’m guessing that the dust we choke on is largely a result of the artificial domiciles that we inhabit, and that our ancestors were never terribly concerned with this quandary whilst fleeing lions.

But the modern man, now living in the filth of his own making, must seek a solution.  And naturally, he turns to another creation of man (or retreats to the wilderness for an extended hiatus from all that tuberculosis).  I speak of the air purifier.

I’d say it’s a bit of a misnomer really, or at the very least an exaggeration.  Does a HEPA filter really cleans the air of microorganisms?  But I doubt that’s the problem anyway.  What I needed was something to remove airborne particulates–something to cleanse the colloidal detritus from the air column.  Something…overkill.

So I bought two air filters.  It was intended to be part experiment, really.  But after two months I opened one and saw this. 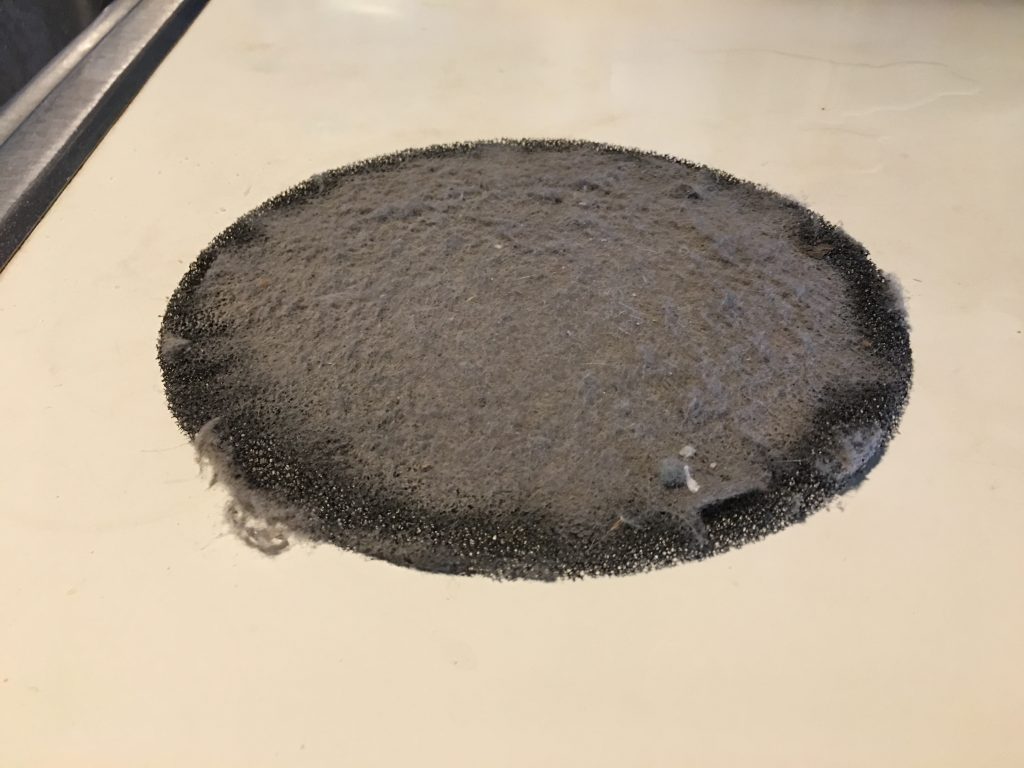 Where does this stuff come from?

Interestingly, the filter in the living room–the one with laminate–clogs the quickest.  I’m guessing that, without carpet, there’s a lot less available material to trap the dust and it gets airborne a lot easier.  Perhaps once all the carpet is gone, I’ll install more filters.  Then, for the first time in my life, I’ll be able to breathe out of both nostrils at the same time!  That, and the old lady smell will finally be gone from the house.

Until then, I have good health insurance that will pick up the prescriptions for the antibiotics needed to fight off respiratory infections.  Ohio!

I knew that when we purchased a house the demands for my physical labor would skyrocket.  As predicted, the chores piled up, and my body, certainly approaching the end of its prime, started objecting by chronically hurting and refusing to operate at peak efficiency.  But the body is a biomechanical machine, and while we as a people pretend to understand it way more than we actually do, logical reasoning and experimentation still apply.

I hate physicians as much as I hate hippie homeopathic peddlers.  The two represent extremes: the former–an ego-maniacal sellout to the entrenched pharmaceutical overlord, the latter–a manipulative snake-oil huckster who relies upon contradictory medical evidence to spin compelling pseudo-science.  They’re more alike than different, really (having the same motivator).  And as I always say, the truth generally lies somewhere in the middle.  Therefore I considered both positions in my conclusions.  So without further ado…

Step 1: determine the source of the problem.  Bones, joints, connective tissue, and muscles all suffer from physical punishment.  Bones strengthen from impact and aren’t a problem unless broken (and men usually don’t suffer from calcium deficiency).  Joints and connective tissue can strain and tear, but the physical therapy applied to fix this problem focuses on strengthening the supporting muscle.  My muscles themselves were constantly fatigued and suffering tears.  So with my bones not a problem, and the other points of concern all pointing to muscles, I concluded that I needed to focus on said muscles.

Step 2: determine what my muscles needed of which they weren’t getting enough.  Presumably, anything my body needs it would synthesize itself from raw organic caloric input.  Of course, it doesn’t work that way, and there are things that have to be consumed to be replenished.  Since the size of my belly can attest to me receiving sufficient caloric input, I therefore concluded that I needed to focus on the essential, vital components.  I know of two: amino acids and vitamins.

Step 3: consider the stages and requirements for muscle growth and repair.  Like anything, it needs base components.  Then to begin construction, it needs metabolizers.  And of course, to operate, it needs an energy source.  Starting point now defined, it was time to seek out something that fit the bill in the form of supplements.

Vitamins were pretty straightforward, despite what the supplements isle at the local grocery store might suggest.  Like anything, casual interest can turn into obsession, but good lord people–they’re just vitamins.  I did, however, choose a name brand.  I had found out once from someone on the inside of the pharmaceutical industry that generic brands contain less of their reported active ingredients than name-brands, due to less stringent legal requirements.  That right there is a red flag that the industry is fucked up.  But anyway, I settled on a standard adult multivitamin.

Amino acids, specifically essential amino acids, usually come as part of protein powder, I guess because amino acids are protein.  As I searched for something simple and minimally processed, I ruled out anything generally marketed to meatheads.  Also because I hate vegans, I didn’t want to support that in any way–which ruled out a surprising percentage of these supplements too–I guess because vegans are worried about getting enough protein.  Finally I found something that fit the bill: brewer’s yeast–the leftover byproduct of beer brewing.  It had the added bonus of supporting an industry I’m behind 100%.  Is fungi okay to eat as a vegan?  I dunno…stupid vegans.

So between vitamins and essential amino acids, I had covered supplementing my muscles with the extra material they needed for growth, repair, and production.  It wasn’t until much later that I found the answer to the energy problem, because it’s part of an industry I also despise, and because of my general concerns regarding artificial supplements: creatine.

But as it turned out, it wasn’t the artificial illegal performance-enhancing jet fuel that the 90s and Mark McGuire had led to me believe.  In fact, there is almost no evidence of long-term detrimental effects.  It is actually a natural distillate (probably not the most accurate word), of animal protein.  You can read Wikipedia for a more detailed explanation, but basically it recycles a certain energy transport nucleotide (adenosine triphosphate) that muscles use, while also allowing muscles to store more phosphocreatine, which in turn increases the rate of adenosine triphosphate synthesis.  And because it’s the same energy system the nervous system uses, it also has the benefit of enhancing cognition, so win-win.

With this trio of supplements, I now had the building blocks for muscle growth and repair, the ability to synthesize muscular protein for this purpose, and greater muscular energy and endurance–which lessened the total amount of injury I receive from exertion while allowing me the greater potential for exertion.  The wood is chopped, the lawn is mowed, and the gardens are being dug.  And, I did it all without spending a fortune or taking something dangerous.

And this combo got a true test when the garage door spring broke and I had to open it manually.  Turns out, according to the technician, it weighs about 400 pounds.  Admittedly, that did make me feel a little like a badass.  Vae Victus!