Over the years, I’ve made a few notes about The Landscaper.  He was…an interesting neighbor.  First there was an issue with his delinquent children leaving beer cans in our yard.  Then our ongoing irritation with his kids cutting through our garden.  And the little spat about backyard fires (and his wife, The Harpy, screaming obscenities as me).  And their dog which they let crap in our yard without cleaning up (I’ve even seen their son intentionally goad the dog over here to crap).  But in the end, it became obvious that The Landscaper wasn’t mean-spirited.  He was just negligent.  A bad neighbor perhaps, but a decent person.

The Harpy, on the other hand, was patronizing and condescending, when and if she ever made an appearance outside at all, going so far as to call The Landscaper home when she found him joining us at our firepit for some beer and chatting.  From afar, of course.  She didn’t walk over.

They ultimately separated.  And from the rumor mill, that’s putting it lightly.  Something about drugs and alcohol and a restraining order.  All unverified claims of course, since the information was through other channels.  The point being, our neighborhood representative of that property was no more. All was quiet for a time.

Then began the construction project.  Initially a quaint foundation, through the dedicated and noisy efforts of an Old Redneck, and lots of Fleetwood Mac, it grew to become an enormous plywood box.  Granted I was none too thrilled, but I ordinarily stay out of confrontations unless the matter is more serious. 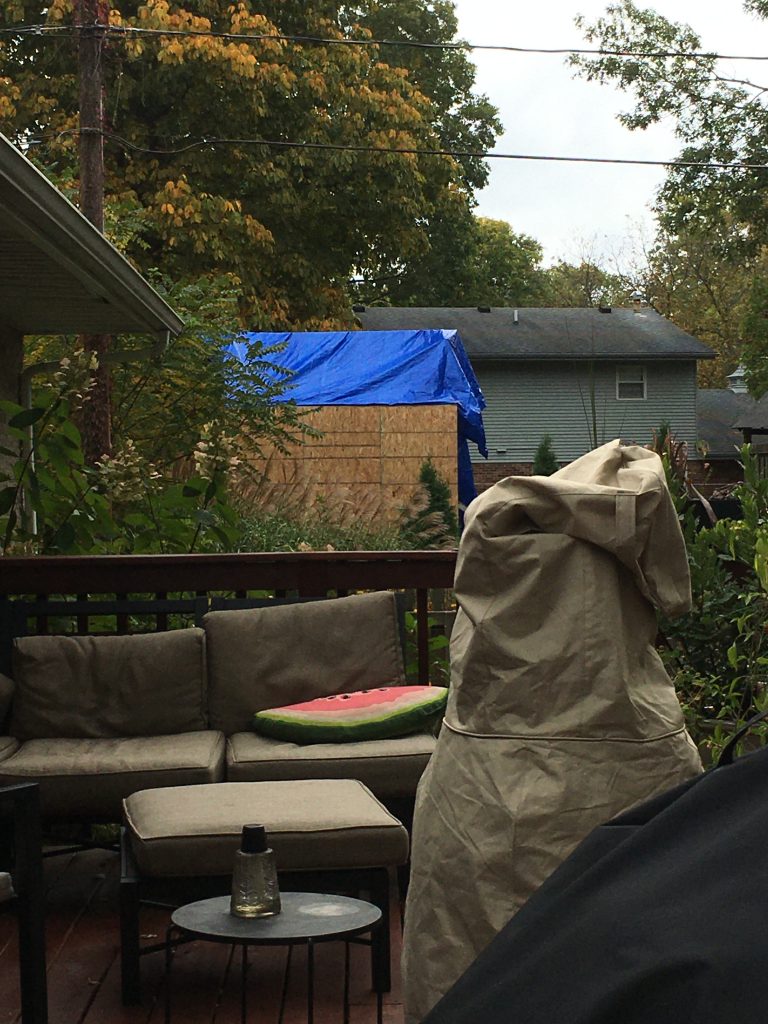 The matter became a little more serious when The Motorcyclist paid us a visit.  Another neighbor with whom we initially had a strained relationship, over whom I was perhaps a little overly-critical, we had since settled into a general truce after the whole fence and surveying matter.  But now he was angry, though not with us thankfully.

He was miffed with the Plywood Palace, and expressed his desire to drive down to city hall and protest.  Taking a more rational approach, and now with the understanding that the matter was bothering more than just myself, I submitted an inquiry to the city’s Planning commission, detailing which zoning statues the structure appeared to violate, and asking if it had a permit.  At the time, I figured this approach would bring some peace to a neighbor, while also curbing the construction’s efforts to complete an unsightly monstrosity for everyone to have to see on a daily basis, instead limiting its height to something more reasonable.  And as an added bonus, it was still in their own best interest to have the paperwork in order before they inevitably tried to sell the house.

What I didn’t expect was the city’s immediate response to dispatch an inspector.  I saw the truck arrive and some measurements being made, the insistence of The Landscaper’s former wife that she had approval for it (which I have since searched for and doesn’t exist in the public records), and some other discussion taking place before I quietly excused myself.  Shortly thereafter, construction ceased.  The Planning Commission’s representative responded to me that they were “working with the homeowner now to ensure everything is being done up to code.”  Fine by me.  If the city deems it acceptable, than who am I to object?

Hello, I’m writing to inquire on any recent permit and inspection filings for the above address, with regards to an accessory building.  Specifically, my concern is regarding Section 9.39 of the City of Centerville Unified Development Ordinance pertaining to Accessory Buildings and Use Standards, General Provisions, restrictions 1, 3, 5, and 6.  The structure in question appears to in violation of these statutes.

I haven’t seen the owner (nor am I certain of who that is), and I’d hate to see the structure advance to completion, only for a zoning issue to arise later.  Others have begun grumbling about the project, so I feel it’s better to bring this to attention now rather than later, and save the owner additional inconvenience.

If the structure has been approved, then please disregard.  Thank you.

Some time later, The Motorcyclist stormed over again.  He had apparently gone to city hall anyway, more than once, and was delivering the message that the Planning Commission was to review the case in an upcoming meeting.  If we had objections to submit, we needed to get those in.  So I sent another message, reaffirming that I didn’t feel it acceptable to approve a structure in violation of published zoning statutes post facto, but if it were to be brought into compliance with these statutes, then that would of course be perfectly reasonable.

To whom it may concern,

I recently wrote to inform of an accessory building under construction at this address.

It has since come to my attention that this accessory building is undergoing a review, pending a final decision to grant special approval.  I also understand that any final commentary prior to this decision should be addressed to this email.

As a neighbor of this address and resident of Centerville, I object to the granting of any such special approval.

I have no objections to the present zoning statutes that regulate these structures, as they clearly maintain the safety, function, and aesthetics of the neighborhood.  And I fear that granting this structure special approval will undermine the spirit of these rules, as well as send a precedent for their future exemption.

To be clear, I would have no objections to the building were it modified to comply with all city zoning requirements.

Thank you for your time,
Simon

The meeting took place, and the motion to grant special approval was denied.

Following that, construction continued, but the height of the structure was first reduced to a perfectly acceptable and pleasing 12′.  In fact, pending completion, it looks very nice.

But The Old Redneck, true to his namesake, had to say something.  Those personality types operate on old honor codes, codes which require responsive action to a perceived personal slight, codes which on some level I still wish existed, except they tend towards premature violence.

But his honor code fell short when he formulated his comment to be completely passive-aggressive.  Old codes don’t work so well in civilized life.  Nor do they carry much weight when directed towards a much younger man wielding a large axe (he chose his moment of confrontation to coincide with me chopping wood).  And since there’s also little honor in taunting an old man from afar while on my own property and holding a weapon, I dismissed him and resumed my task at hand, ignoring additional attempts to re-engage until, disgruntled, he stomped off inside.

There’s lessons to be had on both sides here, though I had a good idea how it would end.  Your house might be your castle, but it’s governed by the city.  And if you think city rules don’t apply to you, it’s unwise to also refuse any active and positive relationship with your neighbors, going so far as to show overt disregard; because while involving the city in the matter wasn’t intended as petty revenge, it sure was satisfying nonetheless.

Of all the brilliant ideas the house’s former owner came up with, I recently discovered that one was to disconnect the attic fan.  I have no idea why he did that, aside from being a cheap bastard that didn’t want to pay the costs of running a small electric motor.

Of course this led to some problems.  Notably, our bathroom exhaust and kitchen stove hood fans vent to the attic.  So we’re continually pumping smoke, oil, and steam up there.  We gradually figured this out as subtle cues manifested, like water spots on the ceiling and the smoke detector at the other end of the house going off when cooking.

But despite clear rooftop evidence of a fan once existing, and our neighbor’s assurance that indeed it used to be there, my attic spelunking expedition did not reveal any such evidence.  Nor did I know where to explore.  Nor did I feel so inclined as to lengthen my crawling journey through insulation.  Nay, an alternate solution was needed.

This is an old rotary blower (courtesy of the Village Elder), which I spliced into an extension cord and mounted to a sheet of plywood cut to fit the width between rafters.  The idea being, that I would mount it against the existing passive heat vent, thereby turning it into a powered vent.

Some 2x4s and deck screws later, with a side helping of profanity, and the fan was affixed. 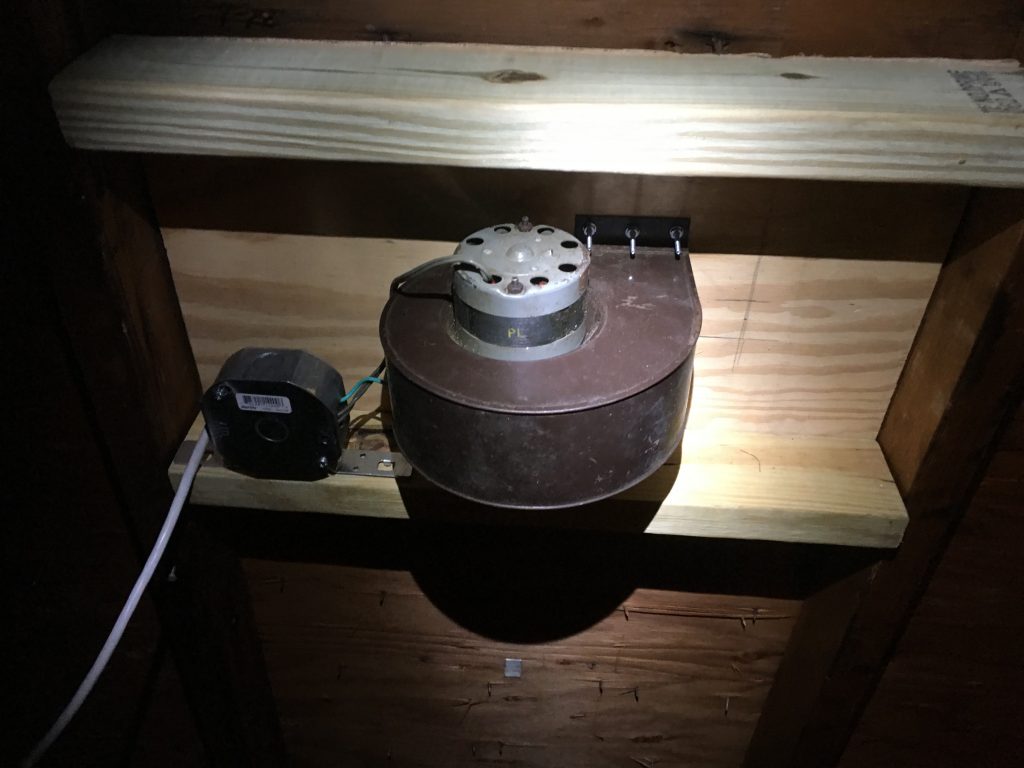 Of course, the outlet up there I had originally planned to plug it into had to be disconnected, also another dumbass idea of the prior owner no doubt, so I had to fix that, which also revealed other problems: spliced wires not properly contained in a junction box and missing grounding wires.  Projects for another day.  For now, I just wanted this working.  Minimum Viable Product, as they call it in the Agile world.

Finally, I employed a fancy little wireless switch, so I could control it without climbing up there.  And I installed a weather sensor too, so I knew when it was getting too humid. 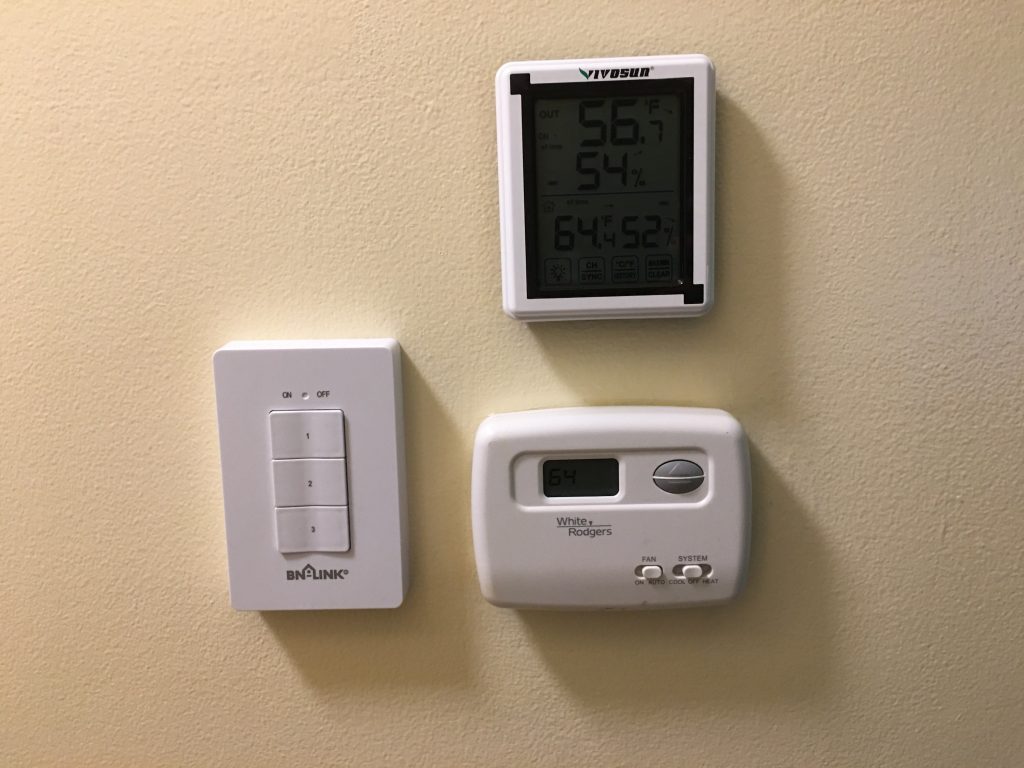 So how does it work?  It works, but it’s definitely under-powered for the amount of air I’m asking it to move.  I plan to install a second fan at the other end of the house eventually.  But for now, at least the shower steam won’t rot the roof out.  Small victories.

With the dubious safety of Trick or Treating under pandemic conditions, a safer way was needed for helping the kid develop diabetes.  And fortunately, such a project lay within my own childhood experiences: a piñata! 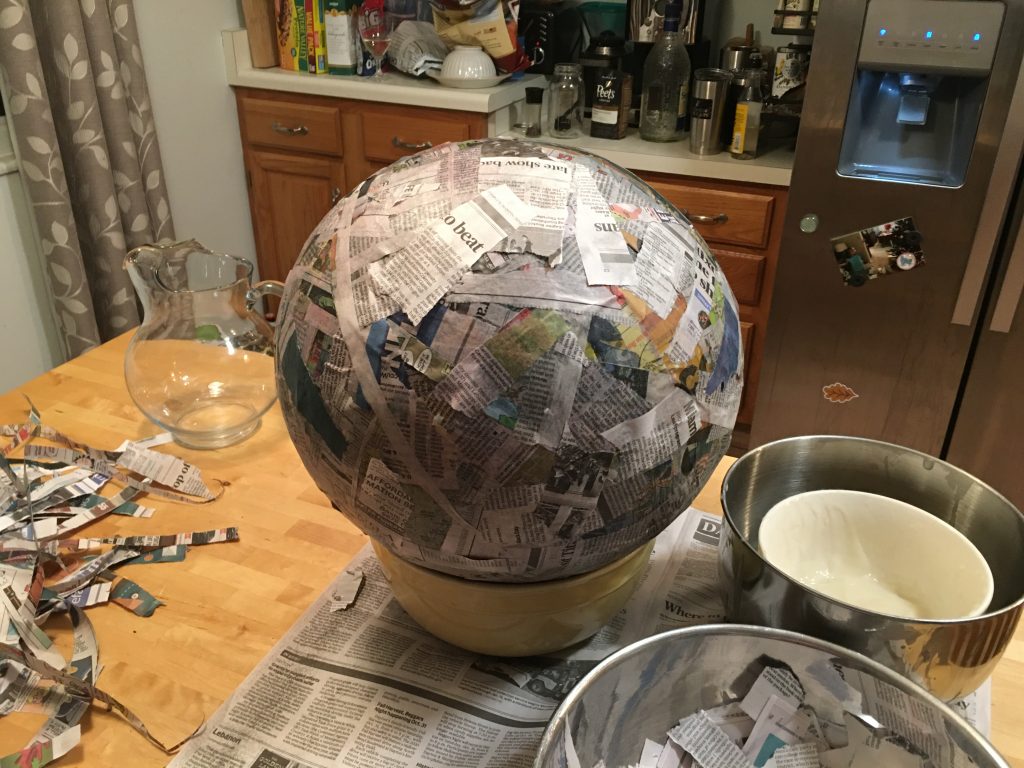 For the uninitiated, this involves inflating a balloon and coating it with hundreds of glue-soaked newspaper strips. 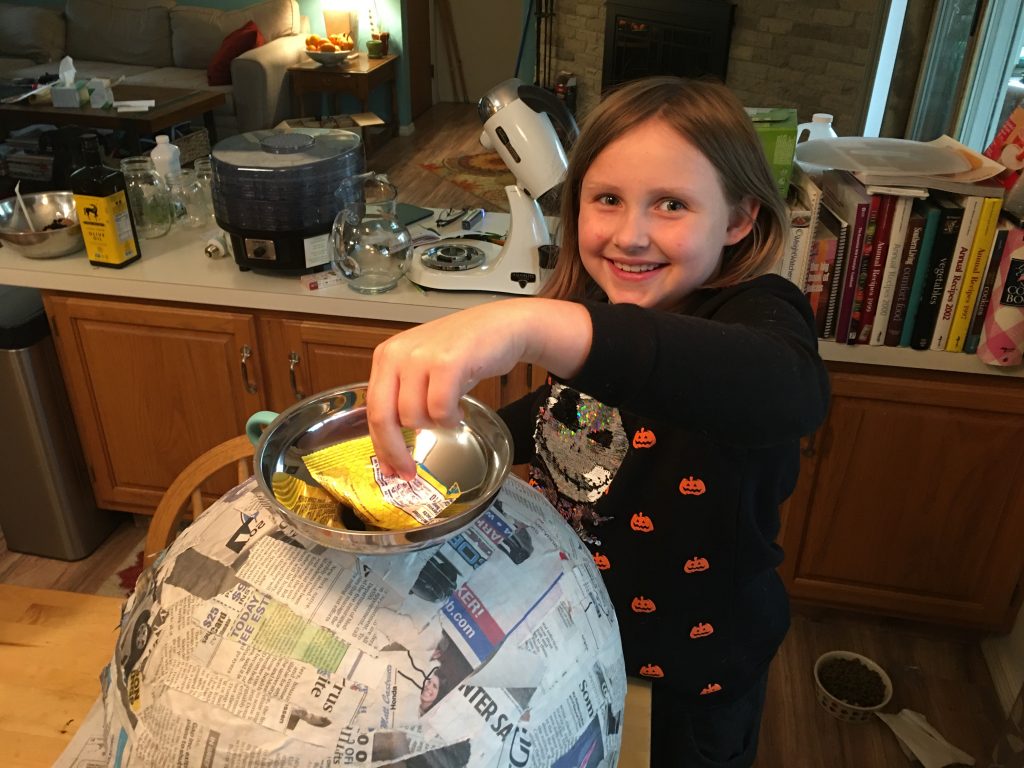 Then the balloon gets popped and removed from the now rigid structure (after it dries of course).  The resulting cavity is then packed with the aforementioned diabetes-inducing abominations. 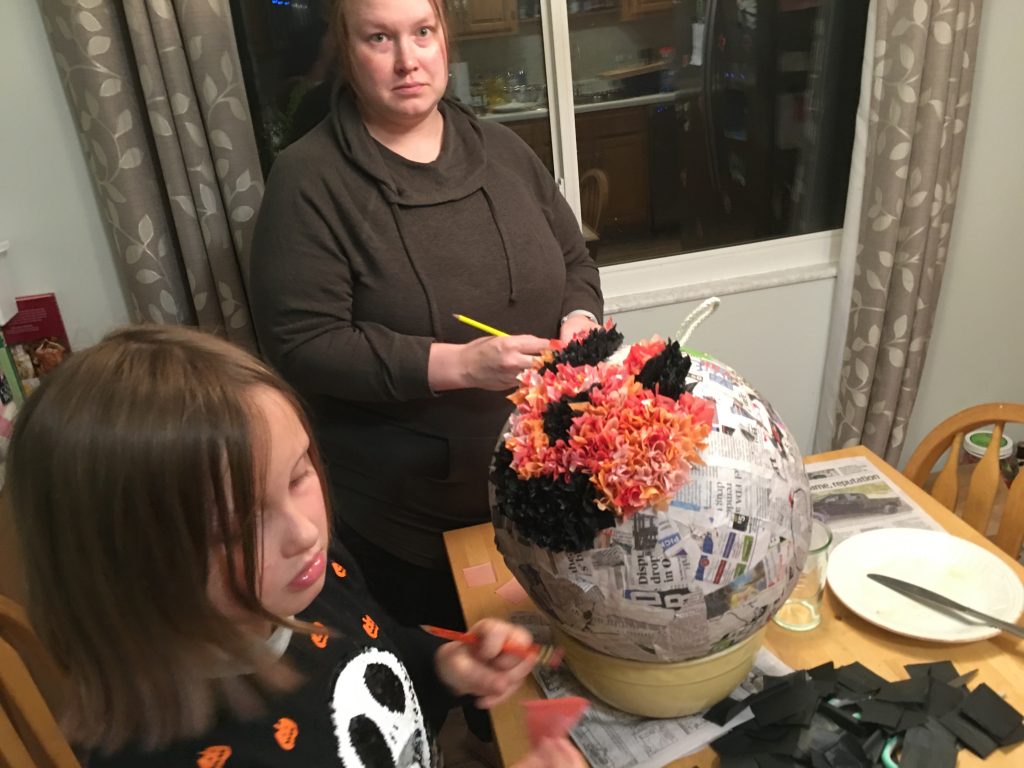 After taping over the hole, the piñata must be decorated…by gluing thousands of tissue paper squares in a pleasing arrangement.  Specifically, they must be glued in a crinkle method to enhance texture and notable cheer.  Look at all that family cheer in the above photo! 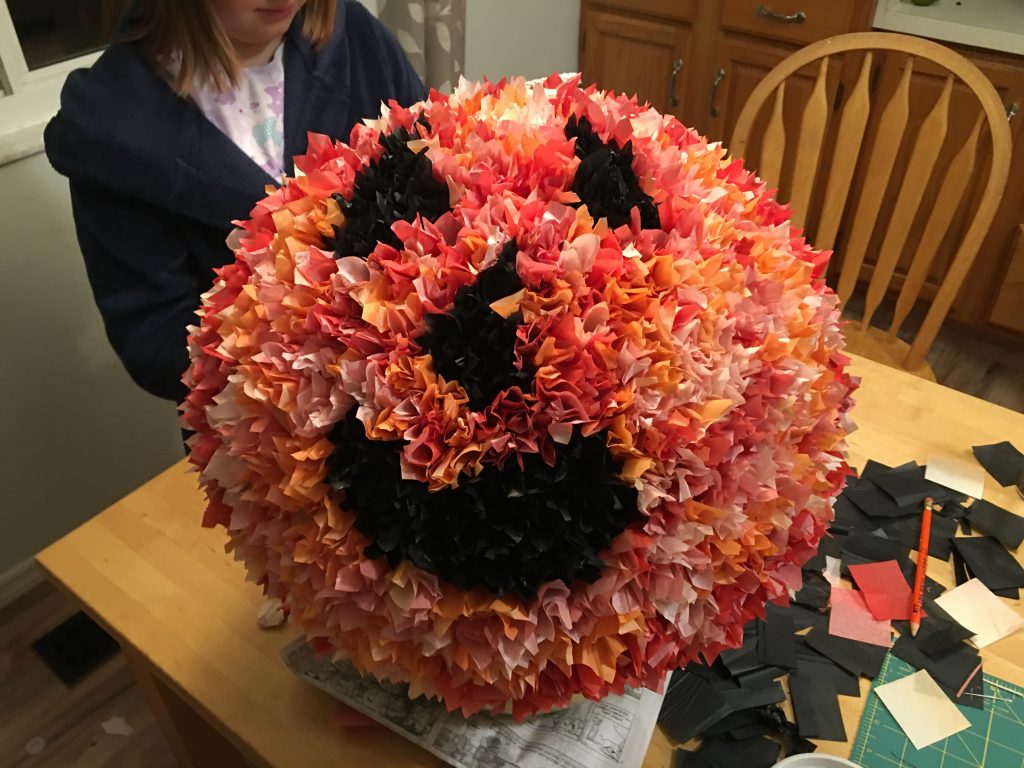 Photos are then taken, for a piñata’s existence is very…ephemeral.  (Hey!  That’s the name of this blog!) 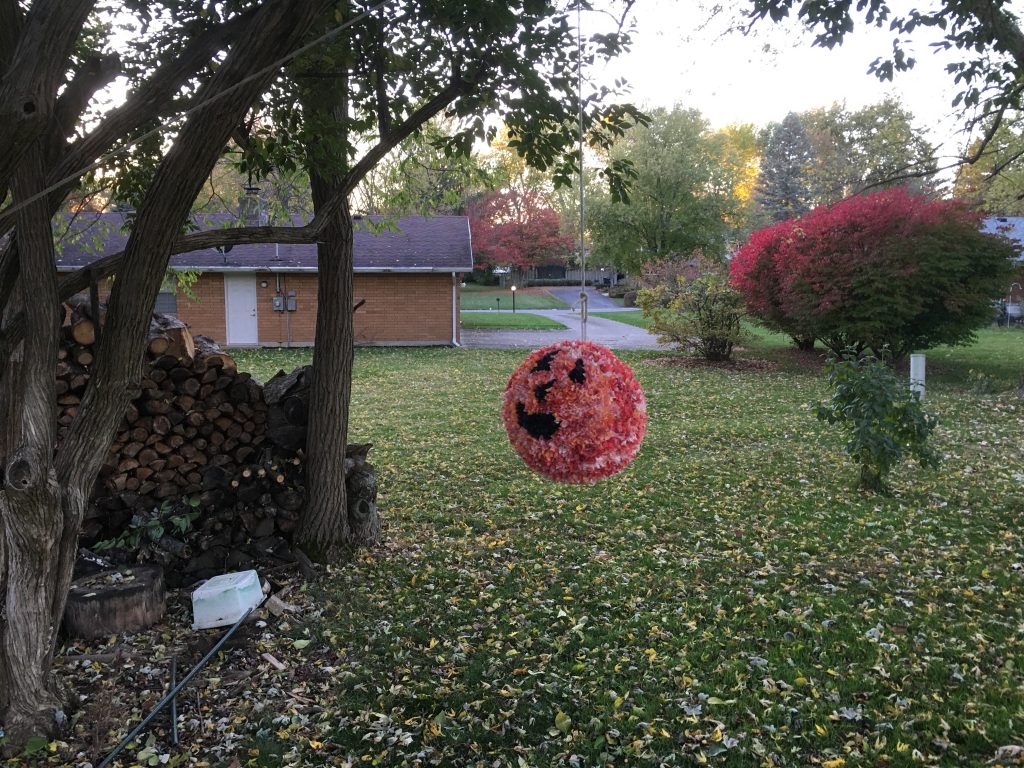 Piñata’s are then hung by the chimney with care…I mean honeysuckle. 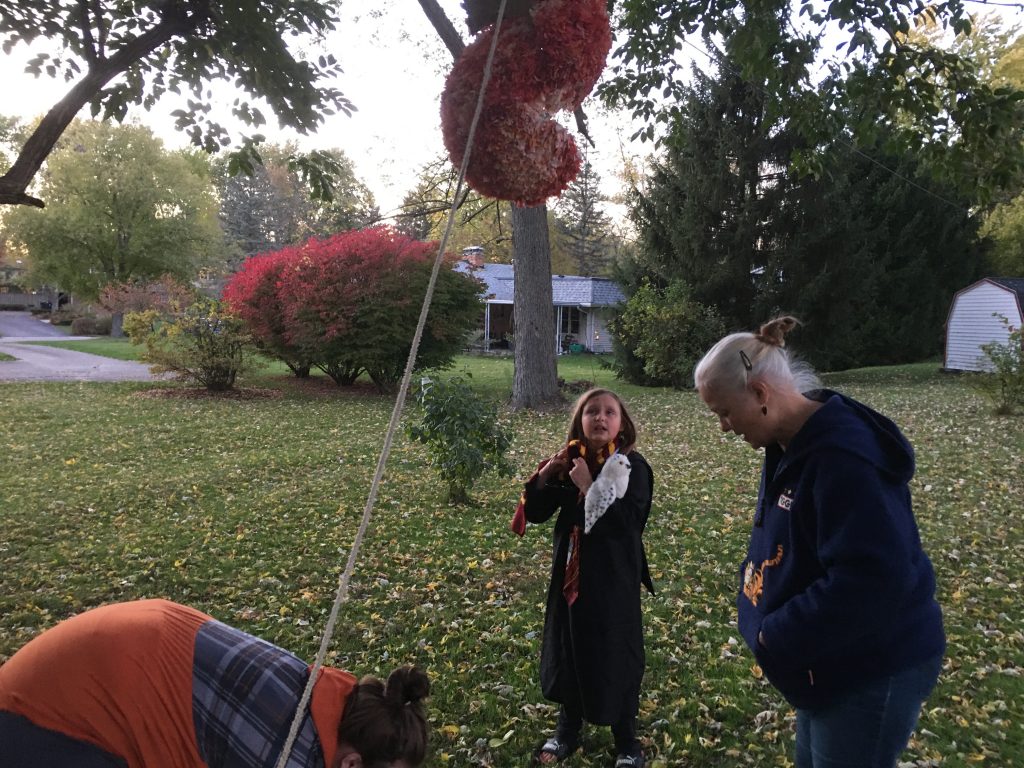 And smashed to oblivion violently with a blunt object!  Releasing their diabetic contents upon the sanitary dirt.  Mother-in-laws assess the situation and offer insight. 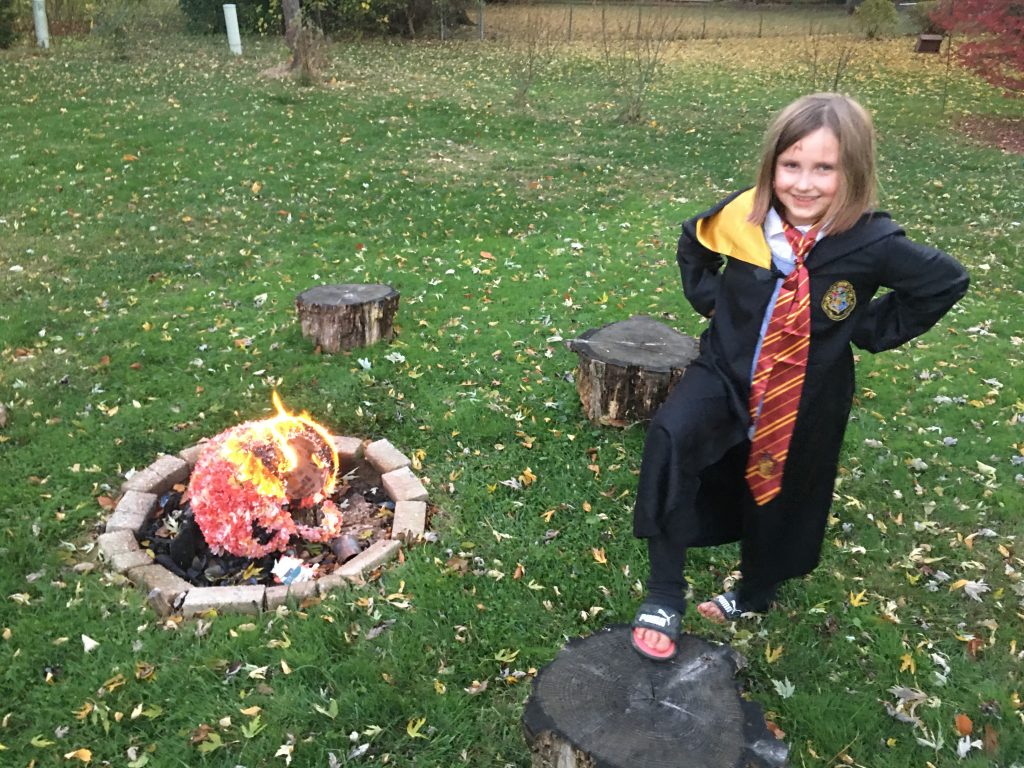 Then it’s immolated, to signify life’s return to dust and ashes, or for luck, or because Dad doesn’t want another dust collector hanging around.

So ends the COVID-19 Halloween.  Happy Halloween everyone!