I heard a theory once that mothers, having endured the pain of childbirth, cope with the trauma through selective amnesia.  The theory posits that, were the memory’s vivid details to remain, no woman would ever subject herself to a second pregnancy.

I don’t know if it makes a good metaphor, but I’ve found a similar effect in husbands who undertake painful home renovations, for 6 months is apparently the point at which I forget anguish and willingly subject myself to the original task which caused the anguish.  Of course, once I begin the task, I quickly remember.  But by then, it’s too late.  Much like pregnancy.

This past Spring, I replaced the hallway carpeting with laminate.  The horrors which lay below were unmentionable (so I mentioned them).  And the end result was well worth the effort, for no longer did navigating the hallway require a temporary hiatus from normal respiration.  Ahh, I love the smell of offgassing formaldehyde in the morning.

The subflooring of the dining room wasn’t nearly as bad, but the carpet was equally rank.  Cut into strips and awaiting their gradual disposal, they pollute the garage with the musty fumes of an old lady and a dying dog.  I’ve taken to running the ozone machine out there regularly, where it works much better than my original intention. 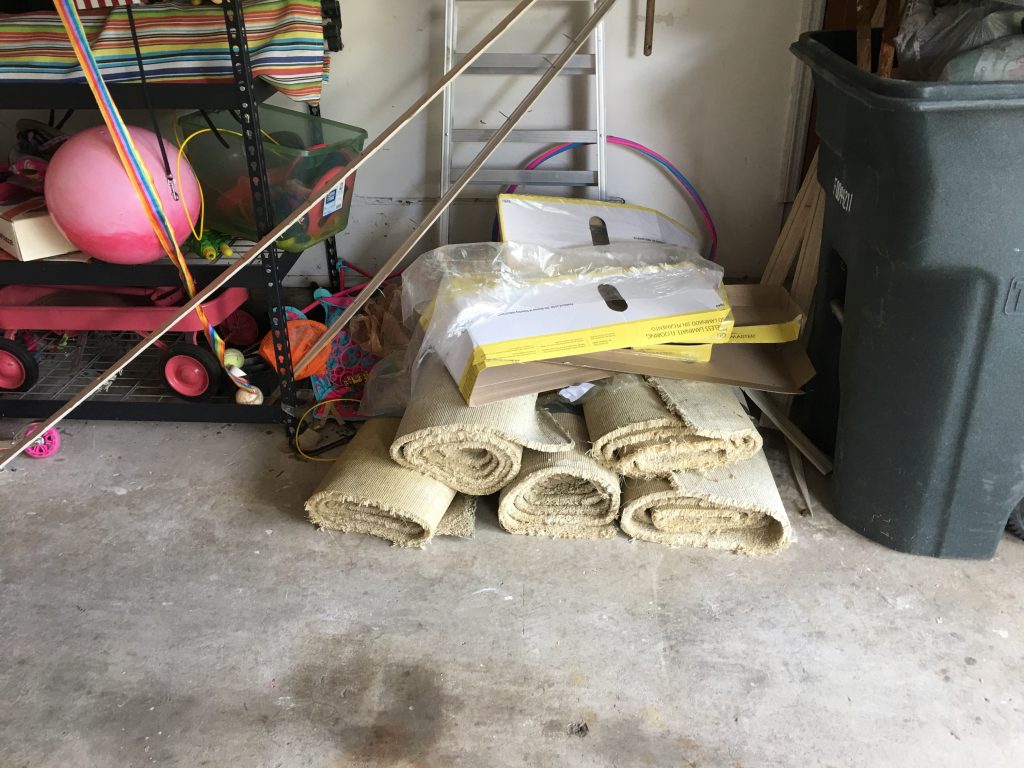 I was faced with a quandary.  When we bought the house, the kitchen and front room had fresh laminate.  The problem was, the slats interlock in a certain direction, and unless I removed areas of the transition zones, I had no way of knowing which direction the slats had been laid.  When I re-floored the hallway, I hadn’t checked, but at the time it didn’t matter because it wouldn’t connect with the existing laminate.  But now, with the dining room, I needed to know.  But I didn’t consider this ahead of time and began work.  It would come down to a 50/50 chance. 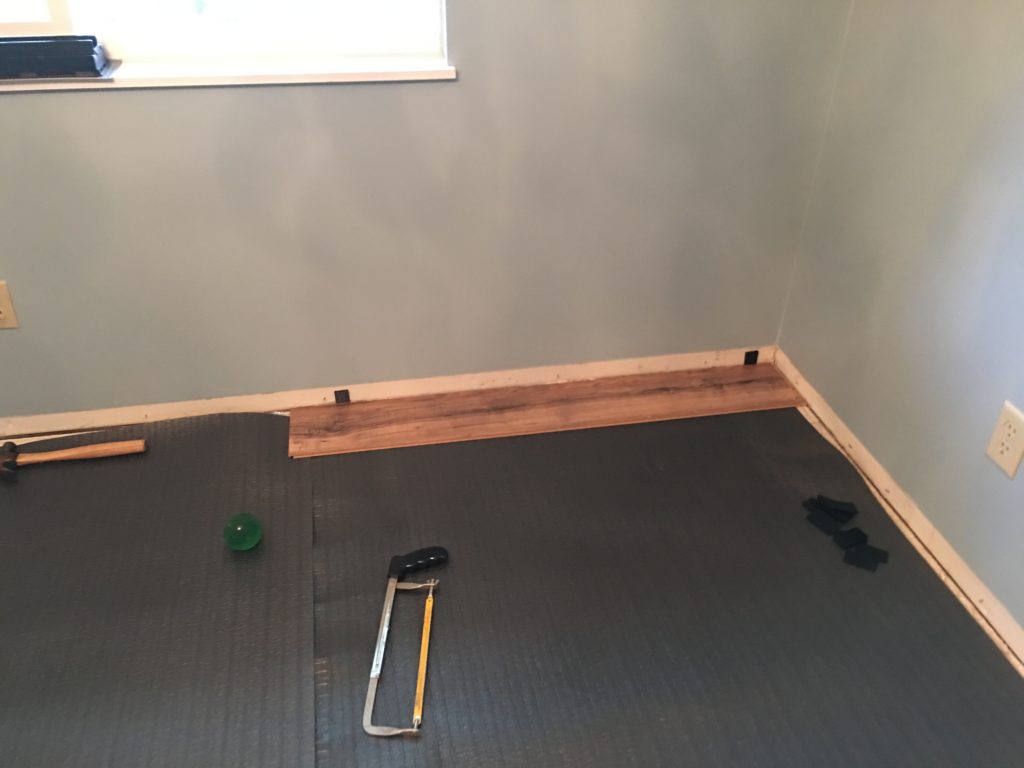 I had already laid the first board.

As the work progressed, the dilemma gnawed.  Could I live with the two rooms not matching?  Would I be content to leave a junction strip between the two?  If I could, would the misalignment forever torment me?  And what if I eventually joined the living room?

So I ripped out the kitchen’s terminal boards and hammered in replacements.  I then shifted my prior work to match, but it was only until the work had advanced sufficiently as to be irreversible did I discover that the two rooms were not perfectly matched in linearity.  No, by mere millimeters were they bent. 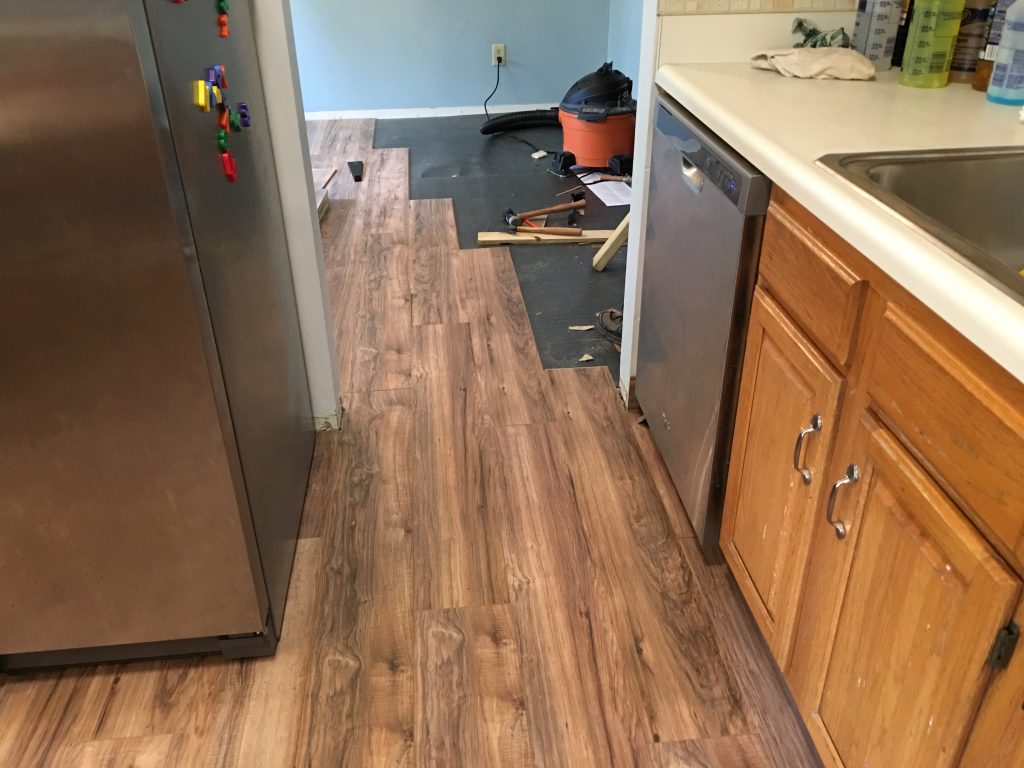 Well, if intellect and proper anticipation would fail me, I could always use brute strength and violence!  At least I would have, had my strength been sufficient, but ultimately I had to use a 2X4 and the wall to force things into alignment.  And cursing.  Lots of cursing.  The boards matched closely enough so as to be convincing, and only a very close inspection would betray the slightest of error.

As proof of my efforts, I paid The Blood Price. 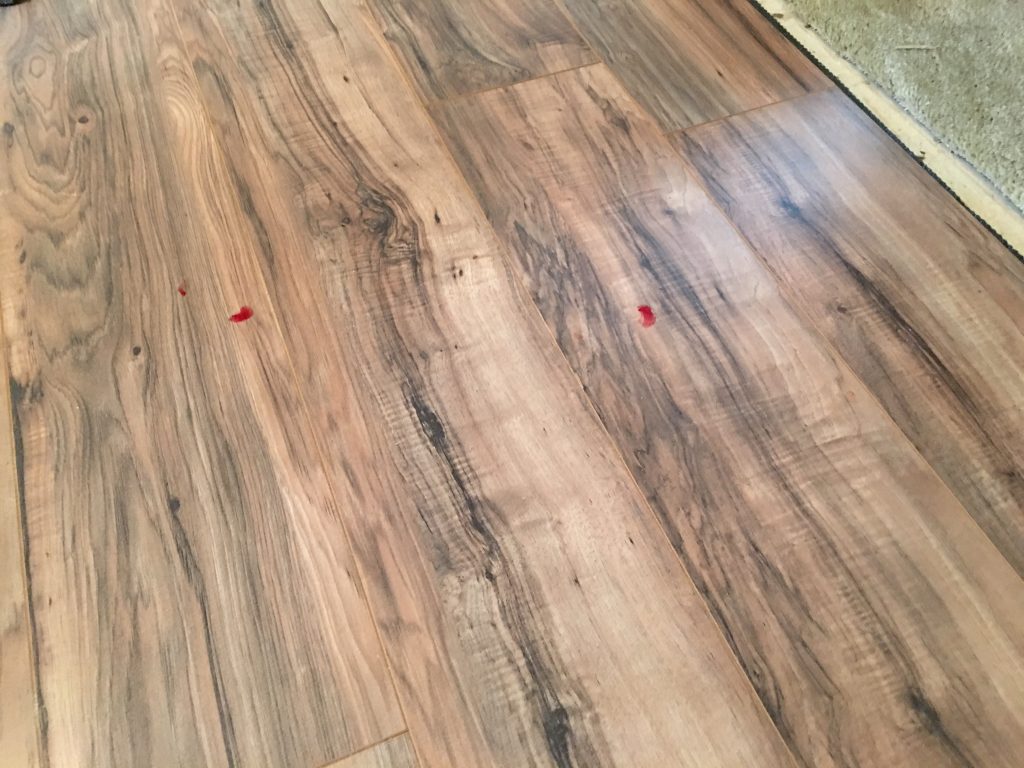 Once everything was aligned with the kitchen, the remaining work was more tedious than noteworthy.  I installed the border strip and replaced the molding. 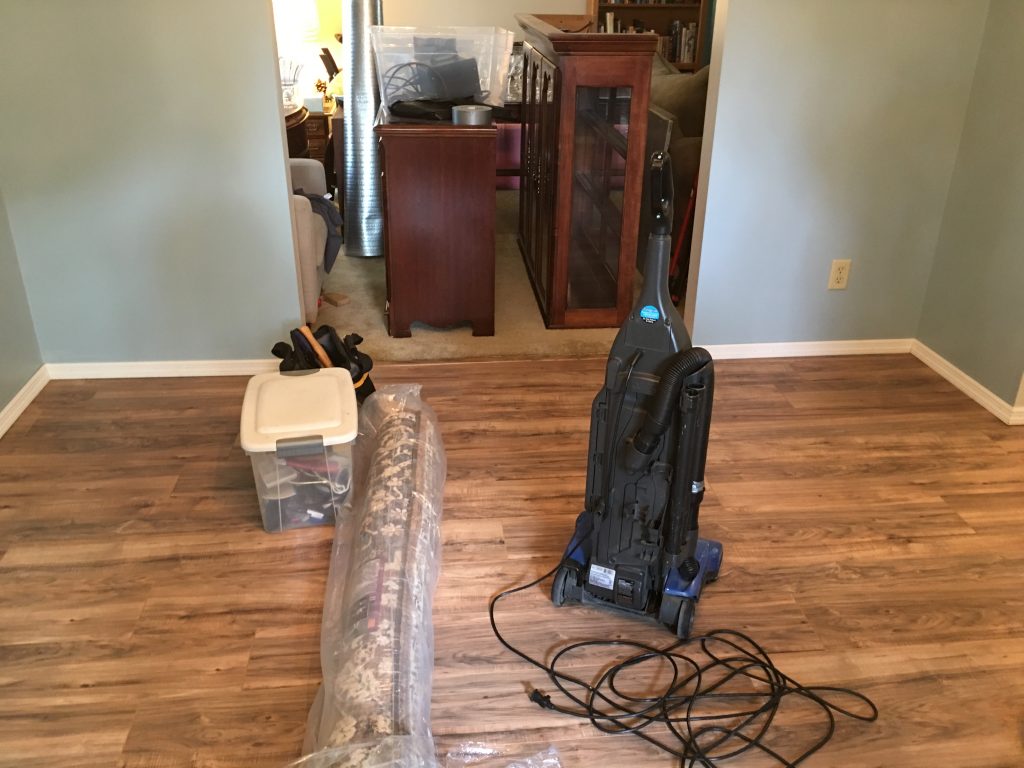 We now have what I call the most adult room in the house, since no one’s allowed to use it. 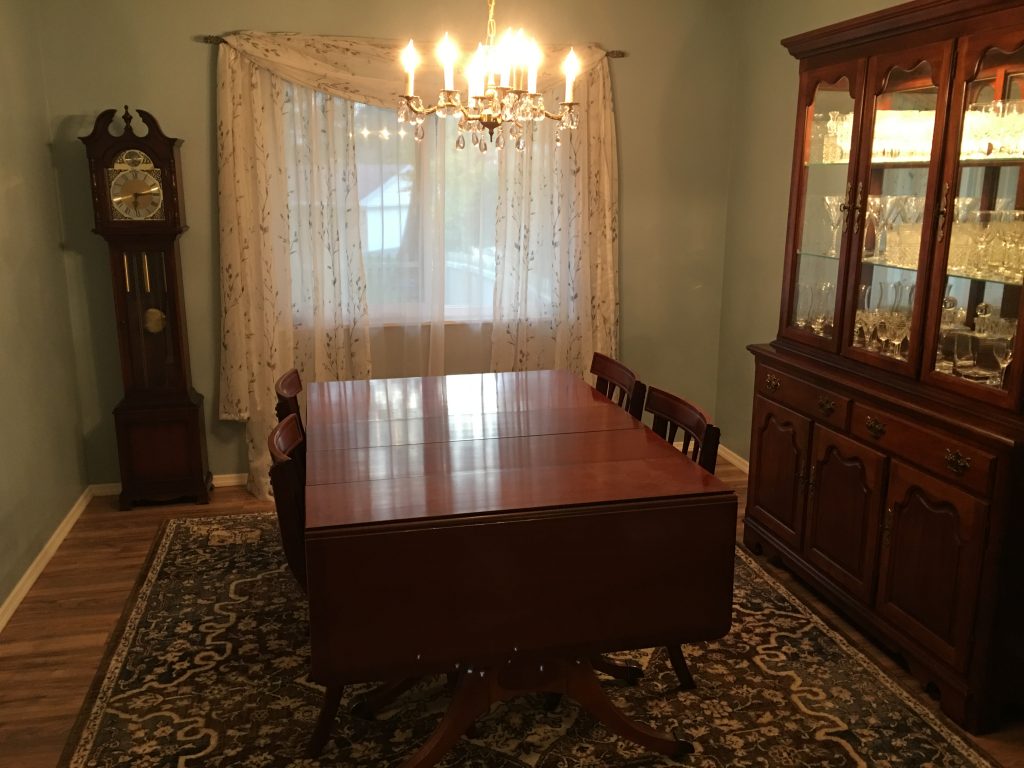 I did so well in fact that Liz was immediately ready to pull the carpet out of the living room, but I required that the home renovation amnesia set in first.

She set a calendar reminder 6 months out.

I replaced another light!

And it went without incident.  True, that makes for a much less stressful project, but has the consequence of also being much less amusing fodder for a post.  Oh well.

We got the matching wall light to the street light (which was an interesting and stressful installation).  There’s still two more to go, but for now, I’ll enjoy the simple incremental step towards home perfection. 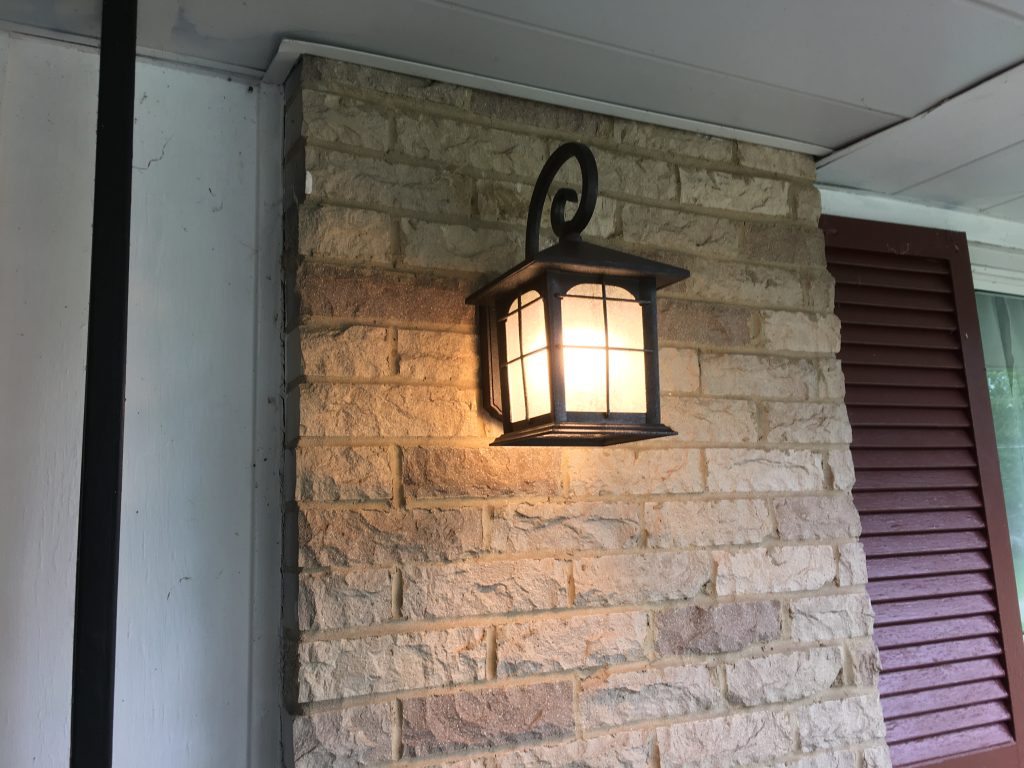 I was denied a promotion at work

Ah well, such is life.

So I did what I rarely do: I shopped to make myself feel better.

And so it was that I revisited a long-neglected hobby.  I bought an aquarium.  Specifically, I bought a small aquarium I had been eyeing for a time at the local pet store, before the Feng shui minimalist style apparently fell out of fashion, because the only aquariums I see now in stores are the bulky and cheap rimmed kind.  And so, skeptical about UPS’ ability to deliver unto me an intact and glass aquarium (seriously, I had acrylic tanks), I ordered the Fluval Chi.

I had always been jealous of the ADA (Takashi Amano) style aquariums, and while I lacked the budget to create one in earnest, the Chi allowed just enough space for a convincing facsimile.  I planned to use black sand substrate, vertically-aligned driftwood, and a java fern.  And, since I didn’t want to clutter the tank with hardware, I would forego the heater and use coldwater-tolerant fish: the White Cloud Minnow.

And while the tank did ultimately arrive intact, sadly, my desire for instant gratification was sabotaged by my local fish store’s lack of stocked driftwood, java fern, and While Cloud Minnows; though it did have black sand.  I grabbed the sand, then noticed a pre-packaged single java fern in a plastic tube…for eight friggin bucks!  Those things grow like weeds and are truly the beginner’s aquarium plant.  I grumbled, and bought it anyway.

Eventually, I found some White Cloud Minnows at a different store, and paid way too much for a simple common fish.  But I only needed 3 so whatever.  Still, no wood, so I resorted to sawing off a chunk from my main tank–which can’t be seen anyway since it’s long-since been overgrown by a decade’s worth of Anubis growth. 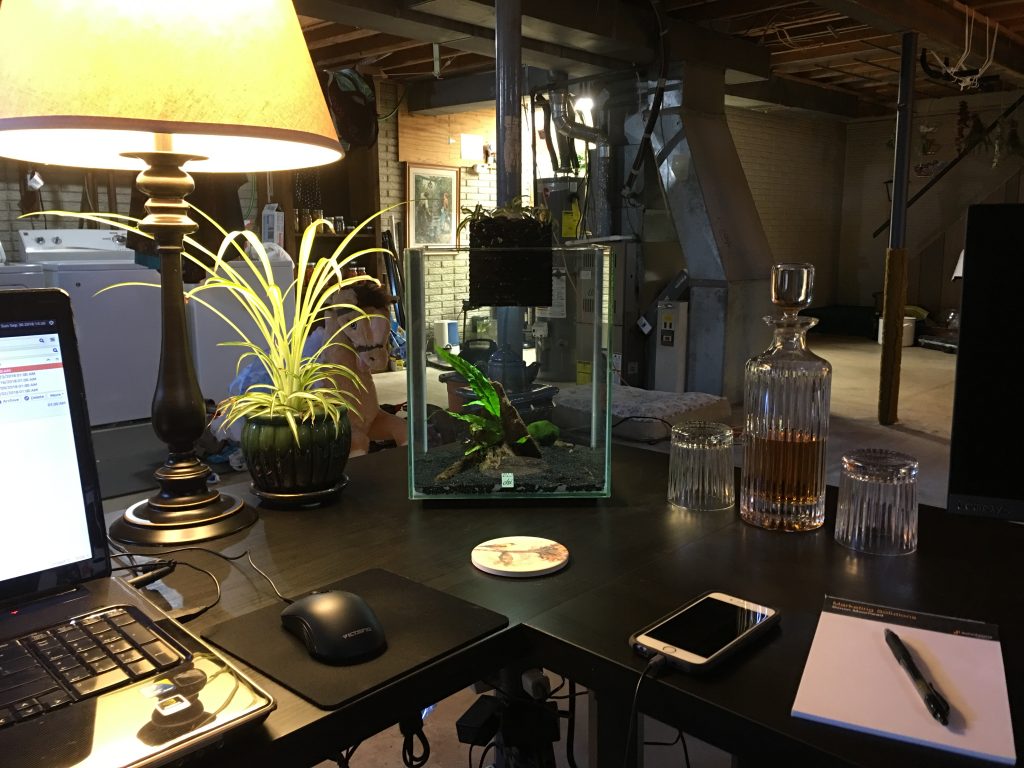 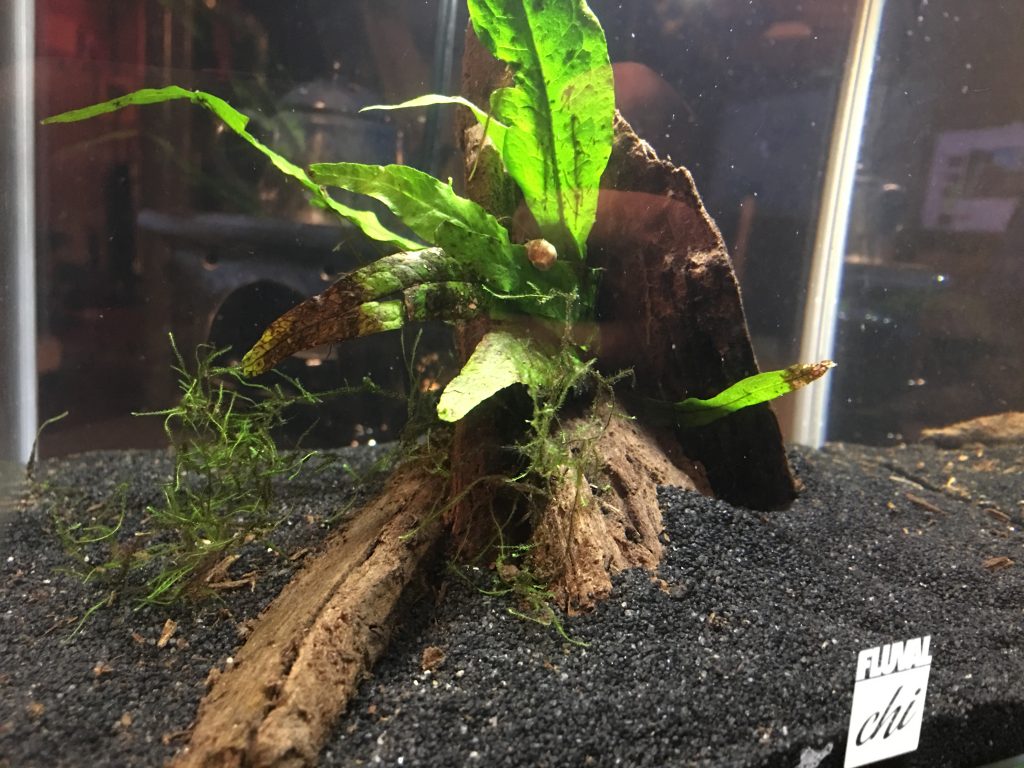 It also has a cool fountain/filter, so I placed black river stones in the top, added some spiderling plants, and dug up a little moss from the back yard.  It now doubles as a small water garden.

Now, when I’m working at home and become embittered, I can glance over and receive a moment’s respite in the micro aquaculture environment I have created on my desk. 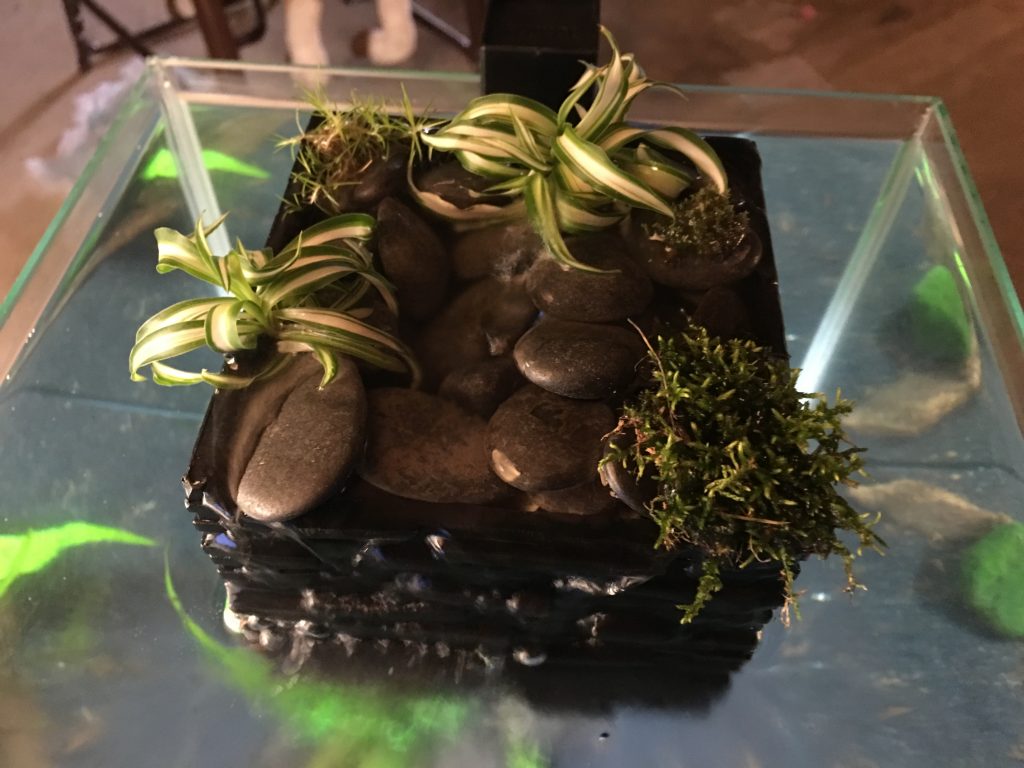 A pretty young woman smiled at me in the grocery store.

This is noteworthy for a couple reasons.  Firstly, it’s rare that anyone makes eye contact with me.  Sure, I could bemoan the sad state of our current society, wherein we shun our fellow humans as simple and inconvenient co-habitants of the environment, but I doubt that the explanation is so simple.  Perhaps it’s because we work ourselves to exhaustion and simply don’t have the mental reserves to allocate to simple camaraderie–or by the same argument, we don’t have enough time.

Second, based on simple observations of a personal lifetime, it’s rare that women in passing find me terribly attractive, or (as it’s been mentioned on one particular account) approachable.  Maybe I should shave the mustache?  Nah.

In any case, the scenario usually plays out as me approaching a woman’s proximity for unrelated reasons, at an indirect vector, and I–being cognizant of another sentient being, offer the most basic of friendly gestures–a smile.  But rarely is this sentiment properly delivered, for the woman never acknowledges my own existence, and even seems to make a conceited effort to avoid the mere awareness of another living being.  Ah well, that’s par really.

But a pretty young woman smiled at me!

Why would she do such a thing?  Did she need assistance?  No–she was merely pushing a cart.  And I didn’t have the kid with me (which is generally the only time women acknowledge me).  Could it be possible that she felt a simple and basic connection to another living being?  There’s more to this.  Let’s figure it out!

I didn’t have time to take a cursory glace at her cart’s contents, but she had chosen the full-sized version.  Was she shopping for her family?  She was on the cusp of being too young for me, and usually women that age aren’t performing full grocery runs.  Maybe she was practically frugal?  I dunno.  I don’t have enough information to make a proper analysis, and all conclusions are mere conjecture.

But a pretty young woman smiled at me!

Maybe it was the mere sight of a well-dressed man approaching her.  Could it be so simple?  Was it possible that there were other women in the world who found me not only mildly attractive at first glace, but also approachable–enough to risk encouraging me?

Perhaps she merely felt basic empathy for her fellow humans.  I’m no stranger to isolation, and the detrimental consequences of extended solitude.  I recall my clinical psychology course in college, which recounted the sad tale of a lonely man who’s last written words were that he was headed to The Bridge, and if just one person would smile at him during his journey, he wouldn’t jump.  Things did not work out so well.  Not one soul in San Francisco between him and the apex of the expanse bothered to acknowledge him.  Maybe this woman was aware of this story.  Maybe she knew the power of a simple gesture–the way it flooded my neurons with dopamine and brought me momentary peace and contentment.  I longed shake her hand or proffer a high-five–some minimally-invasive action that would allow me to perceive her existence in a tactile manner, to prove and acknowledge that she was the tangible being that brought me so much ephemeral joy.

Maybe she was the one on the bridge, reaching out to someone in the most subtle of ways–too afraid to do more–crying out to a world that doesn’t care if we continue to exist.  I should do something.

A pretty young woman smiled at me!

I didn’t do anything.  I thought for so long about the encounter’s implications that we passed, and I never even smiled back.