I love meat.  I hunt.  I worked in a butcher shop.  I clean it, cure it, season it, cook it, serve it.  I’d raise it too, but city ordinances take a dim view of such practices.  And with hunting seasons limited and public lands far away, I’m generally relegated to the suburban method of procurement: grocery stores.

And the problem with said stores is that they tend to only carry cuts that are popular, or at least reasonably in the public knowledge.  The hangar steak is my favorite, but was impossible to find…at least until the public became aware of it.  Of course, when that happened, when I could find it, it was unreasonably priced.  Supply and demand I suppose.

So it goes.  But on the other hand, the general public’s growing curiosity towards alternate cuts has also increased the supply part of the equation.  And so I’m able to find “junk” cuts, like pork belly.

Pork belly is, of course, the part used to make bacon.  And bacon, being a holy gift to us mortal men by powers beyond my comprehension, sat on my shopping list were I ever to see it offered.

And lo and behold, one day it was indeed!  I bought a 10 pound slab.

Of course, acquiring was only the first and smallest step.  I needed to cure and smoke it.  But how?  I’m sure this is the burning question in your very soul at this moment, no doubt also sharing my analysis of bacon being a boon of divinity.

Lacking experience, I needed a baseline, so I followed this recipe.  I take no credit:

How to Make Your Own Bacon

However, I will offer my suggestions, learned through trial and error.

Use a Food Saver bag for the curing part.  This was very effective in removing most of the air, so the meat remained completely immersed in brine.  Not much massaging needed.  Just time.

I don’t have a smoker, but a charcoal grill worked just fine.  It was hard to avoid temperature swings, so be diligent with the fussing.  Better it stay cool than get too hot.

I added wood chips, placed in a foil cup and filled with water.  As the water evaporated off, it steam-smoked flavor into the meat before the dry heat finished the cure.

Reduce the salt by half.  I wasn’t going to leave the bacon sit out, so I’m pretty sure this is safe.  Also regarding salt…

After cutting and before final cooking, soak the bacon strips in water for a half hour.  Otherwise it’s just really salty, even with the reduced salt brine.  I don’t know how they do this step commercially, but if you don’t, your family will complain. 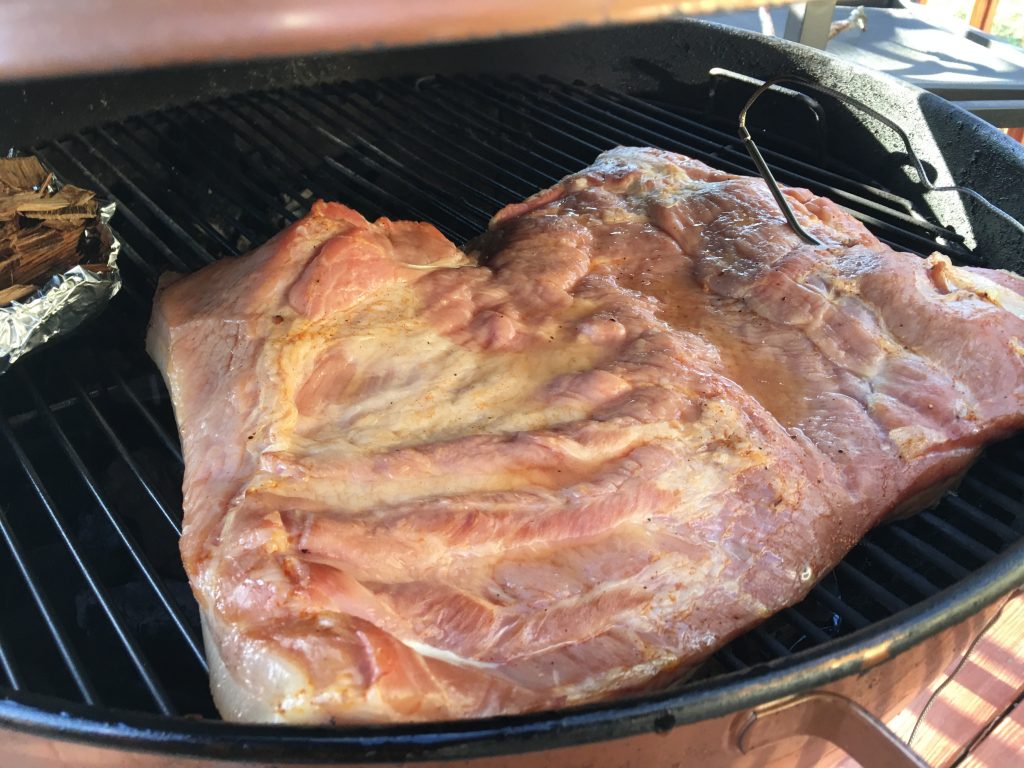 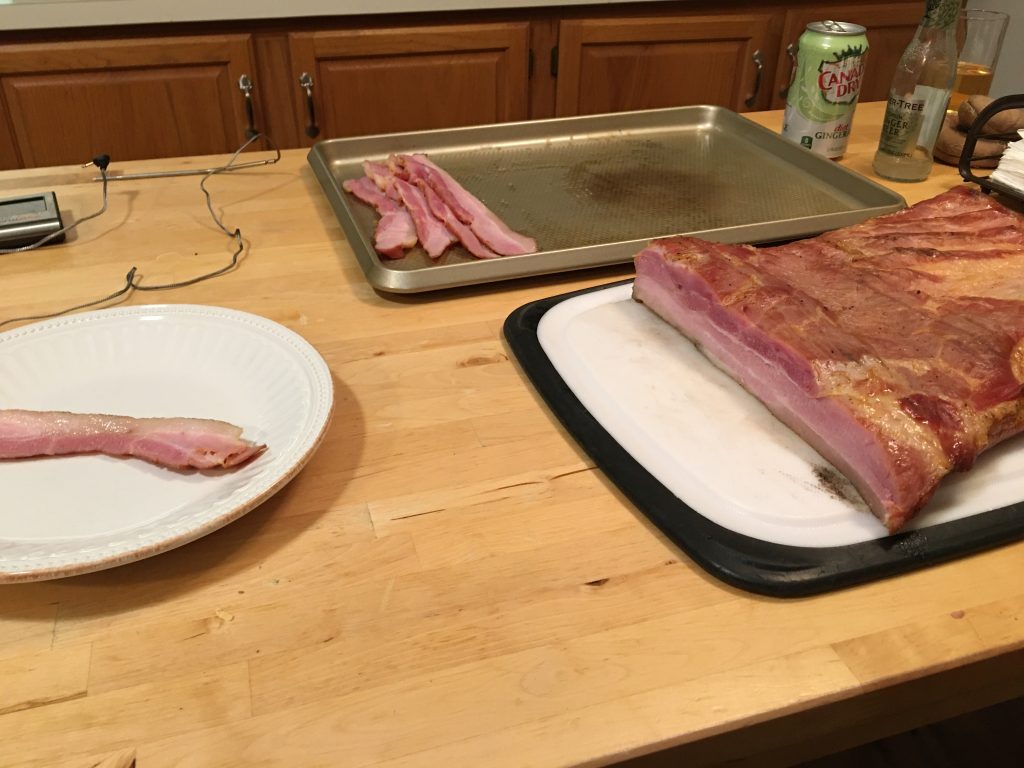 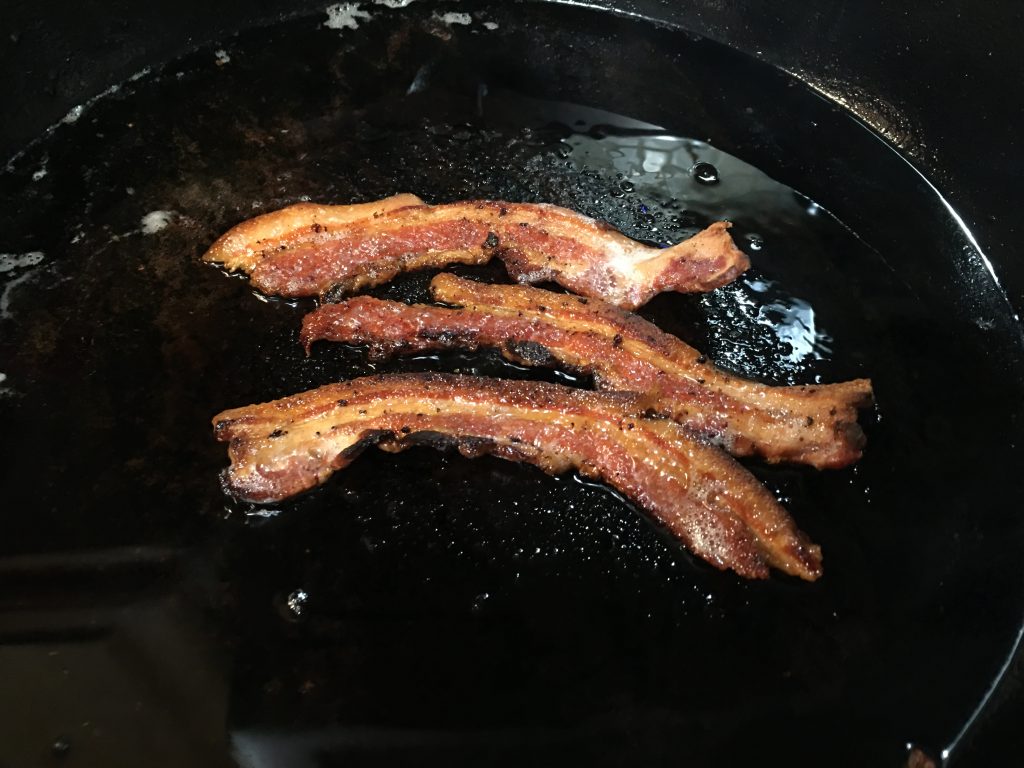 And there you have it: bacon!  “Healthier” bacon, and manlier because I made it myself (I’m in agreement with the above cited article).  And now that I know what I’m doing, I can create my own custom cures.  Experiments! 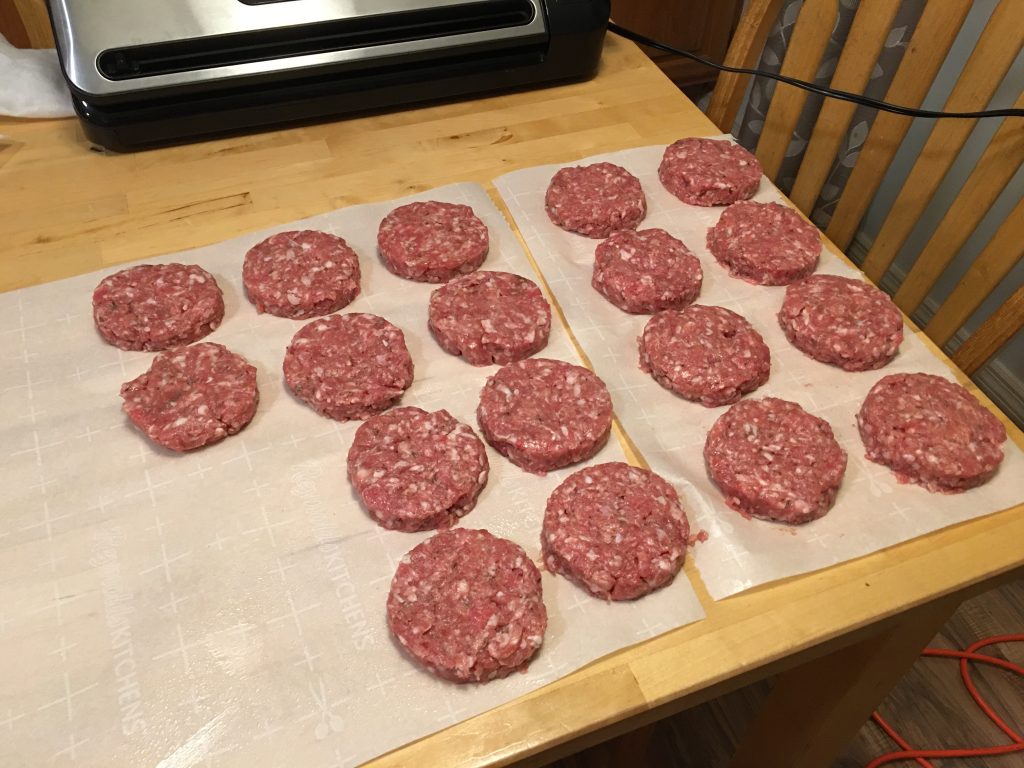