Hehe, remember that one?:

During my recent plumbing project, I considered that connecting pipes, if done wrong, at least wouldn’t kill me.  Still, I found the process irritating, and after the pain of cinching down threaded pipe connections took its toll on my elbows, I concluded that I would much rather be doing electrical work.  Besides which, if I wear leather gloves, the shock of 120 volts is reduced to a mere tingle even if I screw up the breaker.

Still, despite this mitigated lethality, when I find something done wrong, I grow concerned.  So it was that I decided to tackle the unattached electrical outlet in the garage.  I really should remember to take before pictures, but I didn’t this time, so I’ll have to explain the setup.

First, I’ll mention that it was a 2-pronged ungrounded outlet.  That was part of the problem, as an obviously bad choice for the garage, which would presumably be more likely to power higher-amperage devices.  More troubling was that the outlet wasn’t bolted into the wall box, and the wall box itself wasn’t even attached to either the adjacent stud nor the drywall.  In short, there was an electrical line leading into a loose box, then wired into an ungrounded and unattached outlet–a hole in the wall with exposed hot wires.  What could possibly go wrong?

My main concern was that the kid might poke a finger in there, so I had taped up the cover.  And as the outlet lacked a ground, as mentioned, it was of limited use anyway.  But then, as I was shoving rolls of carpet into the attic one day, I considered: how hard would it be to run a separate ground to that outlet and make it serviceable again?  The basement has a ground line running through the joists, so perhaps the attic had one too.  I searched around, but no ground wire was to be found.  That seemed odd, seeing as this was the only outlet in the house which didn’t have a ground.  For a moment, I panicked, thinking that none of the outlets were grounded, but these fears were quieted when I opened a junction box and discovered that all the wiring was modern Romex with connected grounds.

I followed the wire from the box to the obvious spot where it dropped down and fed the outlet in question.  This wire, too, was grounded, which begged the question: Why wasn’t the outlet grounded?  And where was the ground wire?

Climbing down, I checked the outlet box again.  Turns out that the wire did indeed have a ground, but it had been clipped off at the point where the outer insulation had been stripped to separate the wires.  So someone had deliberately installed an ungrounded outlet on a grounded line, and had removed the ground.  Why?  Tugging on the line, I discovered there was no extra wire, so I couldn’t simply connect the ground to a new outlet as-is.  And of course, the box wasn’t mounted so I’d need one that would.  Sigh.

My motivation to complete this project coincided with Liz re-painting the living room.  With my entertainment center out of action, and the threat of being drawn into a painting project looming, I concluded that this electrical problem needed an immediate resolution.  Off to Lowe’s!

In the electrical isle, I wondered why both metal and plastic boxes were the norm.  Why would one be used over the other?  Maybe metal was for industrial buildings.  But for me, I rather preferred to use non-conductive material to house electrical wires.  I also bought a roll of 14 AWG wire to extend the ground.

Back at home, I followed the usual procedure of sequentially flipping breakers until the correct (and least logical) circuit was found.  Then I got to work removing the unmounted box, which wouldn’t fit through the outlet’s hole in the drywall.  I wonder how it got in there to begin with.  Was it installed before the drywall, but never mounted?  The prior owner had done some weird electrical projects in the basement, none of which inspire much confidence, so this could very well be one of them.

At least it was the garage, and the drywall isn’t painted out there, so I didn’t feel much hesitation in sawing through it.  I removed the useless metal box and installed the plastic one, having poked the wires through and extended the ground.  The outlets in this house are worn out, so I’ve been replacing them as demand necessitates.  This is the 5th such outlet to need replacing, so I have a supply of them on hand.

I patched the hole with leftover drywall and spackle.  It doesn’t look very clean, but it works and is far safer than the prior potential disaster. 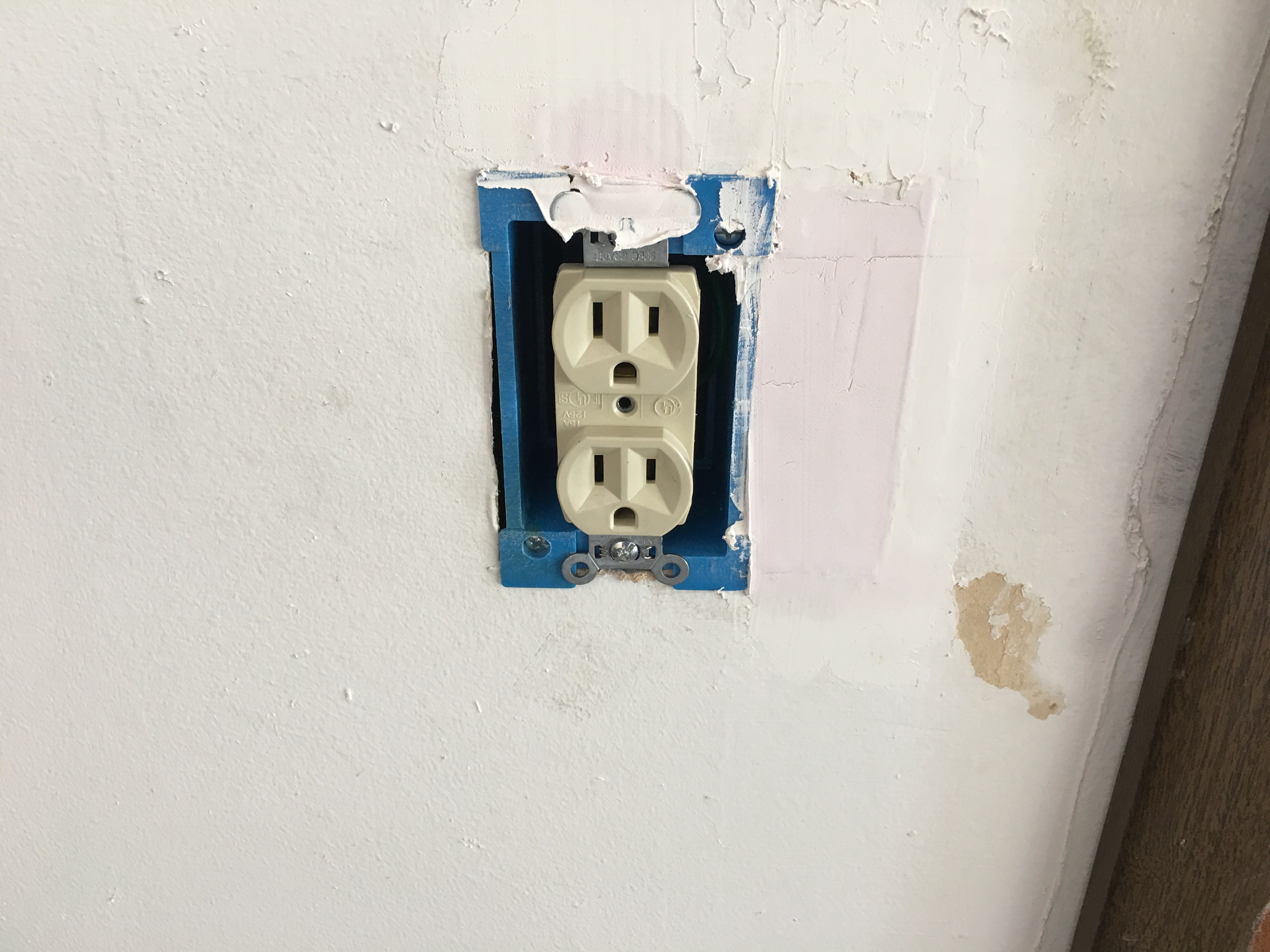 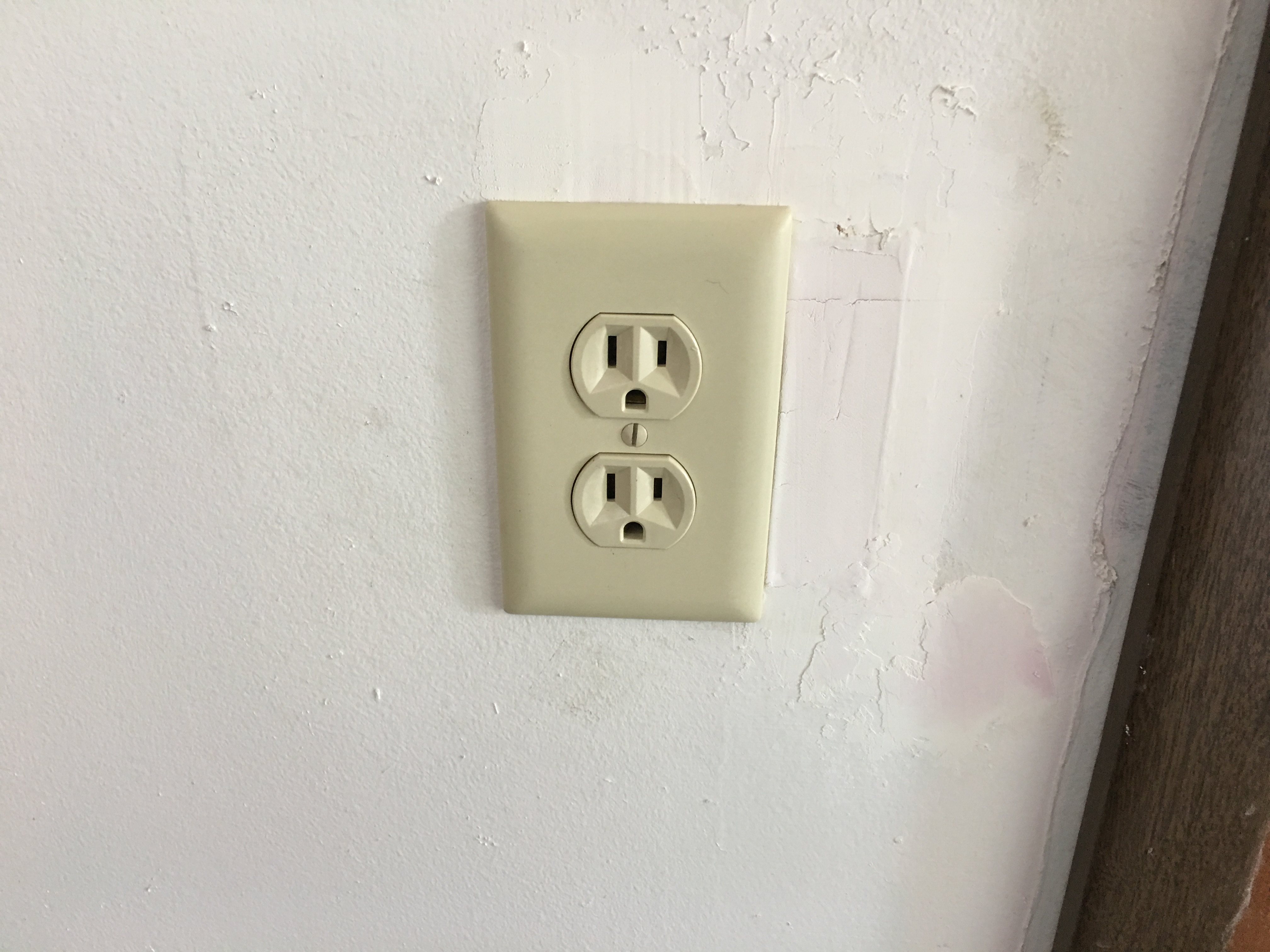 What the hell was wrong with this guy?  You’d think that electrical work is something worth doing right the first time.

Fortunately, my project was finished quick enough that I was able to help out with the painting after all…lucky me.