Our house is neighboring the house on the corner.  On the perpendicular road from this intersection, one house down from this same house, is a house filled with feral children.  These children, in their angst to visit the park, save precious moments by bypassing the intersection altogether and instead blaze a trail through my backyard, driveway, and front yard.

As any self-respecting old man suburban homeowner would do, I’ve conspired in secret to find subtle ways of mitigating the problem.  I laughed evilly to myself as I fantasized over hedgerows of blackberries and poison ivy.  But these are mere irritations.  What I needed was something extreme: Unnecessary escalation to get my point across.

So I pondered the archives of knowledge I spent years of college acquiring–knowledge others have since called useless.  I scoff at their uneducated masses of business degrees.

A vision of Romans and Gauls flashed through my mind, and I recounted the Battle of Alesia–the first major battle to earn the booby-trap notoriety.  Introducing, the Lilly.  Interestingly, Googling the Lilly Trap returned an odd amount of pornographic images.  I perused the thumbnails for a few minutes out of sheer curiosity before returning to my writing, naturally.  My point is, I have no appropriate visual aid to append to this paragraph, so I will describe:

The Lilly Trap was a small pit with a sharpened stick in the center.  The stick was deeply secured, and the pit was either covered with brush or filled with water.  The idea was to hide the trap, so that an unlucky infantryman would step upon it, impale his foot on the stick, and be subsequently immobilized.  Yes, this would subtly get my point across, muahaha.  I began digging.

Okay, enough of that.  This is the part where I tell you that maiming children is not my objective, although chasing them away with a 20 gauge certainly has crossed my mind.  But I had other problems to contend with, namely the drainage situation from the downspouts.

The prior owner had installed extensive waterproofing measures in the basement.  The perimeter had been trenched, and a sump pump installed.  And when we were viewing the house, there had indeed been water in the sump.  But, that was the last time it’s ever held water.

Shortly after moving in, it became obvious that the problem lied in the rainwater’s current drainage paths.  Downspouts, dutifully installed, channeled their contents directly against the house.  These areas had not been graded, so the water simply sat against the foundation.  After the first heavy rain, I deduced something was amiss when I saw the house adjacent to several small ponds.  That, I cleverly declared to myself, holding an authoritative finger of pronouncement to the sky, was not right.

So I began trenching.  But the problem with this particular corner was that the grade went up before down.  So in order to get the water away from the house, I’d have a very deep trench.  Also, the remnants of a stump were between the downspout and the far side of the rise, and I was not keen on chopping through many feet of roots. 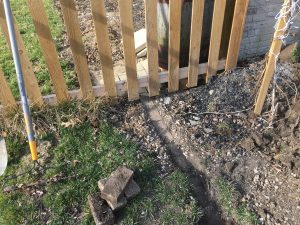 Introducing, the water garden.  I would trench as far as possible, then dig a deep hole, fill it with permeable material, and surround it with plants that tolerate flood/drought cycles.  The cold weather broke and we were blessed with a beautiful weekend.

And sure enough, I started hitting roots, so I ended the trench in said deep hole.  I lined the trench with bricks to provide a solid bottom, then planned to fill the remaining trench and hole with river stone, as I had on the drainage trench in the front yard.  Then it got really cold again, and we were hit with our first spring storm that flooded the project.

So good news: the water goes where it’s supposed to now and doesn’t pool near the house.  When the hole filled with water, it overflowed down the hill and away from the house.  Success!

Unfortunately, now the rain garden is a hole of muddy water almost two feet deep.  But, I have appeased the laws of hydrodynamics, and hopefully in the meantime I’m frightening the children away with my bizarre hole-digging project.  Next step: caltrops!